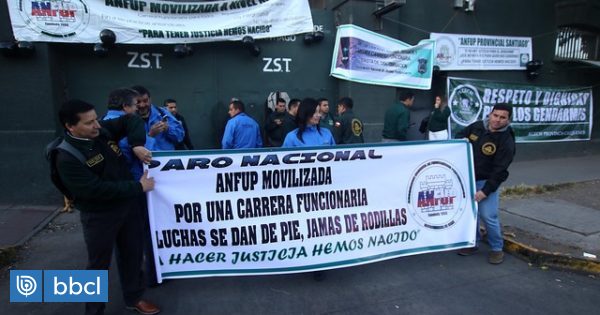 Delays in formalization hearings, postponement of some trials when the accused can not be presented and problems in receiving detainees at the Justice Center are part of the effects of the blockade by Gendarmerie officials to the national strike that began on Monday morning.

Mobilization that got a 98% adherence to the employees of five guilds of the Gendarmaria, almost 20 thousand workers, so the balance of the first day was positive, noting that there is "unity" to continue pushing for a solution to their demands.

An application with demands classified as "historical"such as the improvement of the official career, the incentive to retire and the restitution of social security rights.

The spokesman of the Penitentiary Workers Front, Marcos Aburto, did not rule out radicalize the mobilization if you do not approach positions with the government.

The blockade that the officials held in prisons caused no prisoner can enter or leave prison, which brought consequences especially in scheduled trials and in the Justice Center.

This was expressed by lawyers and relatives of defendants or victims.

While Supreme Court President Haroldo Brito said that the strike "Unquestionably produces disturbances" in judicial proceedings, and its main concern is the right of the people deprived of liberty. Therefore, he pointed out that there are different operations to minimize the impact of movement.

However, the government spokeswoman, Cecilia Pérez, He called unemployment "illegal" and he urged the authorities to resume their work as quickly as possible, ensuring that they keep their doors open to resume the work table.

Words from the spokeswoman who caused annoyance to the president of ANEF Carlos Insunza, who felt that there is no interest in the Executive to solve the problems that the Gendarmerie officers face.

At present there are no new approaches between the government and the gendarmes. Employees have they will keep ethical lapses prisoners from different prisons, but will not carry out transfers.