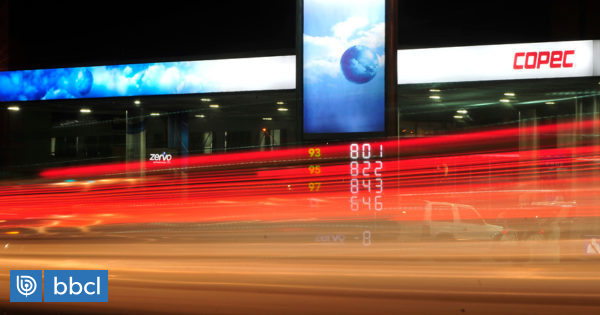 The National Petroleum Company (ENAP) reported on Wednesday prices that will record fuels as of this Thursday, pushed down by the Fuel Price Stabilization Mechanism (Mepco), which avoided the upward pressure on the dollar price.

According to the state-owned company, since December 27, the 93 octane gasoline will drop -5.8 pesos, reaching 737.3 pesos as a benchmark, marking its tenth consecutive decline, returning to its best price for more than five months on July 19.

O dieselIn turn, it will reach 558.9 pesos per liter, which -5.8 pesos less than the previous week.

Meanwhile, the liquefied gas (LPG) It will also vary to the negative side, remaining at 218.3 pesos per liter, since you will notice a -7.3 pesos in relation to the previous week.

In this scenario, 93 octane benzene will record ten weeks off, with a cumulative drop of -57.4 pesos in that period, after the long period of increases that raised the price by 50.3 pesos in 10 weeks.

Meanwhile, 97-octane gasoline reported its ninth consecutive loss, and has already accumulated a fall of -50.6 pesos after the high of 43.4 pesos, which lasted nine weeks.

Despite the positive scenario last time, as of August 23, the balance of 2018 shows a sharp increase of benzines, diesel and paraffin.

The most extreme case is illustrated by diesel, which for a year violently rose a total +90.9 pesos. While the paraffin, which recorded strong ups and downs during the year, closed +20.1 pesos on the price that started 2018.

For its part, the liquefied gas was the only one that surprised the other side, with an annual -35.4 pesos.

As reported by ENAP, the price of crude oil at the international level fell to its lowest levels in more than a year, fueled by worries about oversupply as stock markets plunged in the face of soaring oil prices. interest rates in the United States. In fact, this scenario toppled the Dow Jones industrialist by 450 points.

In this context, oil futures fell more than 35% from October highs. Although initially boosted by signs of strong US demand, they fell after reports of losses in Asia.

To contain this, the world's most prominent producers, grouped in the Organization of the Petroleum Exporting Countries (OPEC), have agreed to withdraw part of their output in order to boost prices, although cuts do not come into effect until January and until now, the simple ad did not stop the fall.