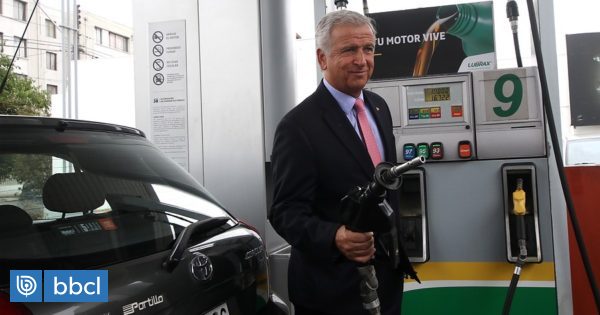 The government said the price of fuel will fall in the next seven weeks. The announcement was made by Finance Minister Felipe Larraín, estimating a drop in the value of gasoline and diesel by the end of February.

This scenario would be added to the price drop observed since October, which accumulates 70 pesos fall. The executive estimates that by the end of February there will be a total of 100 pesos falling in the average price of the fuel, which would mean an annual saving of 150 thousand pesos for a vehicle that travels 1,500 kilometers per month, according to the Secretary of State.

"The Chileans will be during the most important period of the vacation, with the prices of benzines at a disadvantage," he said.

Although the sustained drop is not due to the merits of the government, since the drop in fuel prices is directly related to the international scenario, Santiago University academic Hernán Frigolet said, "provided the type." exchange rate (dollar) we had upward pressures. "

At the same time, the unbridled fall – for the twelfth consecutive week – contributes to a fall in inflation, which, according to the finance minister, benefits, among others, those who have mortgage loans in UF.

Specifically, the National Petroleum Company (ENAP) explained that prices will fall, once again, thanks to the Mepco Fuel Price Stabilization Mechanism, which avoided upward pressure on the dollar price.

According to the state, from Thursday 10 to Wednesday January 16, the liter of 93 octane gasoline will drop -5.8 pesos, reaching 725.7 pesos as a benchmark, marking its twelfth consecutive loss and a total low of 69 pesos.

The diesel, on the other hand, will reach 547.3 pesos per liter, which implies -5.8 pesos less than the previous week. The kerosene, in the same line, will notice a new fall, this time from -5.9, reaching 461 pesos per liter.

Meanwhile, liquefied gas (LPG) will remain at 202.4 pesos, as it will fall by -6.9 pesos from the previous week.