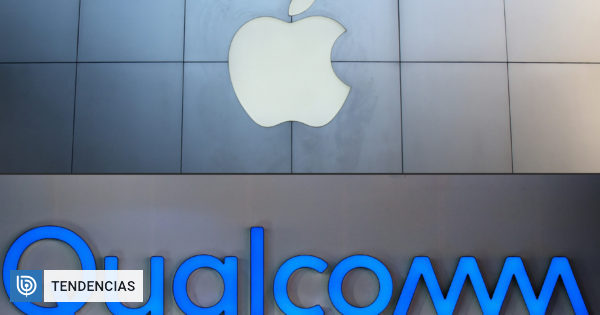 After more than two years of judicial battles, Apple and Qualcomm they signed an armistice over the payment of royalties for patents.

The two companies reached a trade agreement, which they announced shortly before starting the initial arguments in a new trial in a federal court in San Diego.

"Qualcomm and Apple today announced an agreement to rule out all litigation between the two companies around the world", both companies reported.

"The contract includes a payment from Apple to Qualcomm. The companies also entered into a six-year license agreement, effective as of April 1, 2019, which includes a two-year extension option and a supply contract of chips of several years, "they added.

The statement does not specify how much Apple will pay, but makes it clear that Qualcomm is once again the Apple supplier.

Shares of the chip maker have soared 23.2% in the stock market, while Apple's remained stable.

Apple has accused Qualcomm of taking advantage of its dominant position to charge exorbitant prices for its patented chips, which allow smartphones to connect to mobile networks.

Both companies faced a lawsuit filed by Apple in January 2017.

In the latter in San Diego, the iPhone maker not only refused to pay, but also sought what could be billions of dollars in compensation.

Qualcomm, who had a lot at stake, because most of his income comes from raising royalties, denied Apple's argument and claimed that his only reason to go to court was to negotiate prices down.

After the selection of the jury in a federal court in San Diego, the presentation of the arguments began on Tuesday.

The Apple and Qualcomm bosses, Tim Cook and Steve Mollenkopf, had to testify during that process that, according to schedule, would last for a month.

"In order to buy Qualcomm chips or gain access to patents offered as a guarantee of a cellular standard, Qualcomm requires third parties to pay much higher royalties ", argued Apple.

"What this means in the case of the iPhone is that when Apple engineers create a revolutionary new security feature, such as the Touch ID, which enables cutting-edge technologies like Apple Pay, Qualcomm insists that the royalties are paid for these and other innovations in which they did not contribute and the payments increased, "he said.

At the beginning of 2017, Federal Trade Commission of the United States sued Qualcomm for alleged antitrust violations in the sale of certain components and licenses to smartphone manufacturers, including Apple.

In April 2017, she was forced to pay $ 815 million to the Canadian Blackberry in a dispute over royalties.

And since 2015, between sentencing and settlement, he has paid high antitrust fines in China, South Korea, Taiwan and the European Union.

The Apple-Qualcomm dispute also led to patent lawsuits. Although Apple alleged that some of Qualcomm's patents were invalid, Qualcomm accused Apple of violating them and even attempted to ban the sale or import of the iPhone in several countries, including the United States. This has led to contradictory judicial decisions.

In March, a US court ruled in favor of Applefew hours after a judge in the same circuit ordered a partial ban on iPhone

A few days earlier, Qualcomm scored a point when Apple was ordered to pay $ 31 million for patent infringement.

And it also managed, at the end of 2018, to ban the sale of certain iPhones in China and Germany, also for patent infringement, failures that Apple can resort to.