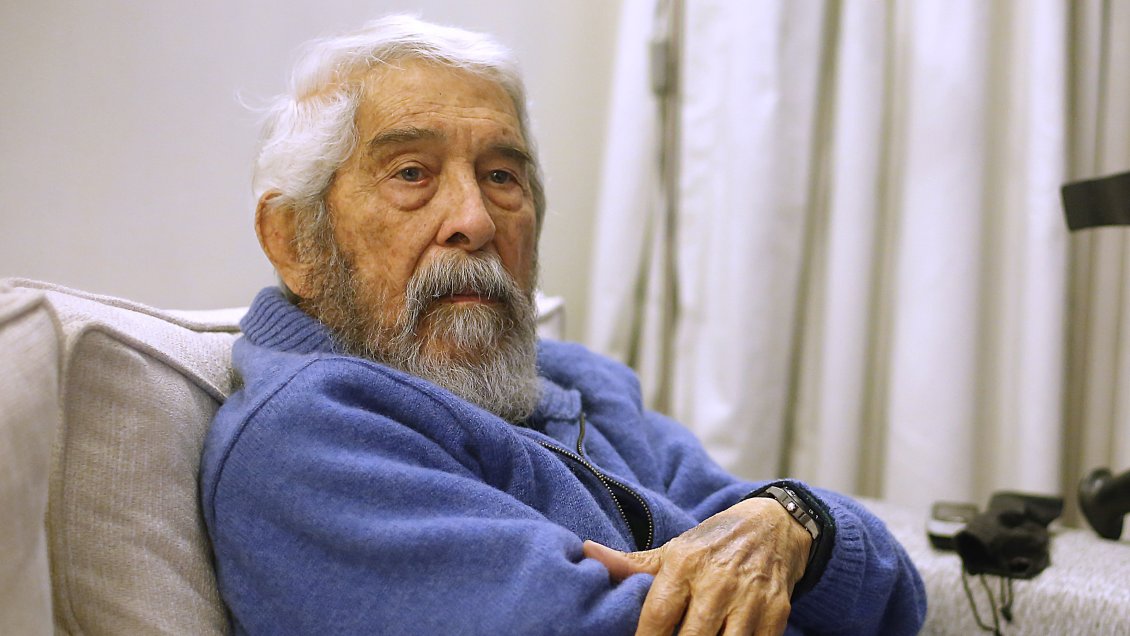 Renowned journalist Alberto "Gato" Gamboa Soto died this Friday at the age of 97.

Gamboa's death occurred around 7.30 pm at Clínica Dávila in the Recoleta neighborhood, confirmed his wife, Estela, Sergio Camposdriver of The Journal of the Cooperative.

"He was a tremendously affable but very incisive man", recalled Campos, who said that the news "undoubtedly lament journalism and the hearts of the many friends he spread across the country."

Sergio Campos also emphasized that his "spirit of humor" and his "sharpness" of looking at political work were the marks of his extensive and outstanding professional practice.

The "cat" Gamboa, National Journalism Award 2017 will be veiled in the chapel of the San Ignacio El Bosque School. Gamboa is the author of the famous headline "He ran alone and came in second place," published after Pinochet's defeat in the 1988 plebiscite.

Born on February 16, 1921, Alberto "Gato" Gamboa Soto He was a journalist, editor and director of several publications written in Chile.

He was trained in Liceo José Victorino Lastarria and in the Pedagogical Institute of the University of Chile, where he completed the career of History and Geography, although the journalistic concern was forged from the 17 years.

He was recognized for being one of the founders of the Association of Journalists of Chile and the Circle of Sports Journalists.

Ercilla, Last hourand The Gazette, were some of the means by which he passed, besides the newspaper Clarin, which he promoted from the sixties to September 1973, at the height of the dictatorship of Augusto Pinochet.

Gamboa was arrested and tortured and passed through the National Stadium and the Chacabuco Prison Camp. In "A trip to hell", of 1984, compiled the testimonies of the comrades with whom he shared his prison for three years.

His performance has never diminished. After the hard experience, he directed Fort Mapocho and promoted the gestation of The fourth and The season. He also led the sports section of The Nation.

In addition to its 2017 National Journalism Award, O "Cat" Gamboa Received the Bicentennial Prize of Journalism of Chile 2012 and the Prize to the Journalistic Way, granted by the Association of Chilean Journalists.

Gamboa's departure quickly generated a series of sympathetic reactions between his colleagues and other figures and public institutions.

Our homage to #GatoGamboa, with whom we have shared countless times and been an active part of the guild until very recently. Condolences to his family and nearest circle / Alberto "Gato" Gamboa, national icon of the journalist, died https://t.co/OuC0JJToyL via Cooperative

I interrupt the rest to pay homage to the legendary Alberto "Gato" Gamboa. One of the most prominent Chilean journalists of the last decades, a political prisoner during the dictatorship. Eternal honor your privileged sorrow. Rest in peace. pic.twitter.com/2UkJCak3SR

A journalism professor left. He also converted the task of keeping a newspaper into an art. Good trip, Cat Gamboa. pic.twitter.com/XSenE2XMkR

It was a great journalism. Inspiration for many of us. Rest in peace "Gato" Gamboa

He died the creator of "He ran alone and came in second place": Goodbye Jack Gamboa.

My homage to Cat Alberto Gamboa, one of the greatest in Chilean journalism, who left us today after a long life contributing to a more democratic Chile.

It leaves us a big problem! All my respects Don Alberto "cat" Gamboa. Many years ago, I understood his gaze on journalism for everyone, I admired his humor despite having suffered violence, I envied his courage.

A year ago I defined this as a selfie of the day, today a user of good-natured Twitter retweets when I was trying to find the photo for a long time. What a joy to share! It will be a pleasure @ja_richards https://t.co/12HJDomkLg

One of the great dies .. Alberto "Gato" Gamboa. Great as a man and great as a journalist. Dear cat, thank you for everything you gave to this country, with this pen and this privileged wisdom.
!!! We will never forget you !!!

One of the greats of Chilean journalism died: Alberto "Gato" Gamboa. He will be remembered for his ingenuity, consequence and courage to make a free press in gloomy times in our country. Our tribute to him and to all his works and professionals that he formed @PRadicalcl @bancadaradical

Our affection and immense memory for the great Alberto "gato" Gamboa, parishioner and companion of our beloved Black Jorquera! Sit down, my Don Manuel will open the first bottle! Cheers !!! pic.twitter.com/qS0Z4M1Ew5

My condolences to your family, your friends and colleagues who dismiss you. A fighter x democracy and defender of freedom of expression … https://t.co/Ctme4SDuGZ https://t.co/bfQeQSu6io