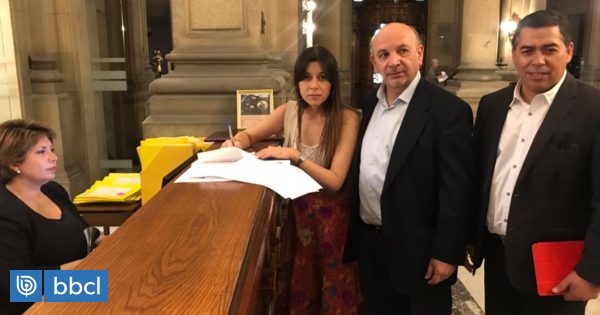 In the morning of this Monday members of the bank of the Socialist party (PS), they entered the Constitutional court (TC) an application for Disqualify three ministers from discussing the protocol of conscientious objection of the abortion law on three grounds.

Daniella Cicardini, Juan Castro and Leonardo Soto – all of the PS members – arrived at the TC to enter a letter of application so that the ministers Juan José Romero, Pia Silva Gallinato and Miguel Ángel Fernández can not participate in the discussion in which the CT will analyze the constitutionality of the abortion protocol.

From the PS they accuse that the ministers should be disqualified because they are part of the faculty of the Pontifical Catholic University of Chile (PUC), an institution that has publicly demonstrated against the Abortion Law.

"According to the publication of the site of the PUC itself, they are professors of that university and, therefore, they have an incumbent connection with who precisely is the institution that has been required and defying the regulation of termination of pregnancy in three causes, "said socialist deputy Leonardo Soto.

In that line, Deputy Soto added that the Minister of the TC, Miguel Ángel Fernández, as well as a professor at PUC, as a lawyer sponsored requests from at least five senators from Chile Let's go before TC, which seek to repeal the current regulation of the therapeutic interruption of pregnancy.

In the document presented to the TC by the parliamentarians, it is detailed that the PUC "challenged the scope of the protocol of conscientious objection dictated by the previous administration through the protection action before the Supreme Court of Justice of Santiago (Case No. 8.818-2018). Resolution No. 61 of the month of
January 2018. "

The document inscribed by the PS parliamentarians joins those who had already joined the National Renewal Party and the Independent Democratic Union in search of the TC declaring unconstitutional the new rule of conscientious objection decreed by the Ministry of Health.