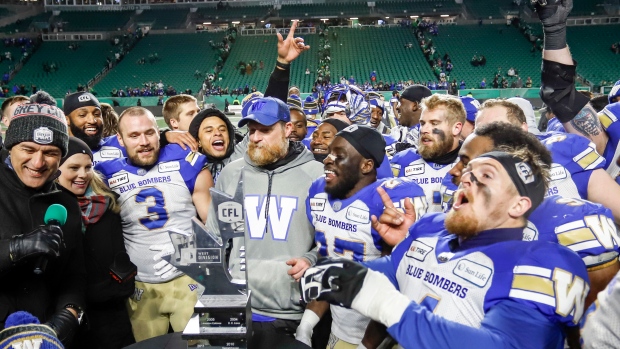 REGINA – Winnipeg Blue Bombers advanced to the Gray Cup with a 20-13 win over host Saskatchewan Roughriders in the CFL West Division final on Sunday.

The Roughriders had a goodbye week, while the Bombers beat the Stampeders 35-14 in the division semifinal last week.

Winnipeg last played in a Gray Cup in 2011, when the Bombers fell 34-23 to host B.C. Lions. The Blue Bombers have not won the CFL championship trophy since 1990.

Blue Bombers quarterback Zach Collaros completed 17 of 25 passes for 267 yards and a touchdown.

The West Final was his third consecutive bomber match since it was acquired in a trade on October 9 from the Toronto Argonauts.

He could not run football as aggressively as in a regular 611-yard season. Fajardo went 27-to-41 through the 366 yards.

Collaros' strike and defender Chris Streveler, who was so effective in the semi-final win over Calgary, was less so on Sunday, perhaps due to Streveler's injured foot.

Streveler, who ran 82 yards and a touchdown against Calgary, made an incomplete pass on his only appearance in the first half.

Saskatchewan's defense was ready for Streveler to run in the second half, keeping him 10 yards on four charges.

In a third and goal with four seconds left, Fajardo's end zone pass bounced off the post to end the game.

Winnipeg's defense denied Fajardo in an attempt to drop a meter to a touchdown with 2:37 remaining.

After 17-7 to start the fourth, the Roughriders had Bryan Bennett, third string quarterback, in the center of a close scoring play.

A lack of communication cost the hosts a touchdown and Lauther kicked a 12-yard goal.

Winnipeg's Winston Rose took a pass from Fajardo at the end of the third quarter and took it back to Saskatchewan's 34-yard line before being pulled out.

The Roughriders defense kept the visitors in Medlock's 44-yard goal to close the fourth.

Fajardo found his pace at the end of the second quarter, with seven passes to 94 yards, but the move stalled in the red zone.

Visitors led 10-1 after the first quarter.

From their own three-yard line, the Bombers raced down Collaros '63-yard pass to Darvin Adams, followed by a disaster penalty on Saskatchewan's passer who moved them another 15 yards and Collaros' 26-yard pitch to Lawler. in the end zone.

Collaros fell holding his left knee when Saskatchewan defender Charleston Hughes hit the defender's legs, but the Bombers striker remained in the game.

The 107-yard touchdown was the longest in CFL playoffs since the West 2011 final, when Edmonton climbed 108 yards against BC.

The Riders turned the ball in the middle of the first quarter. Winnipeg's Steven Richardson retrieved a fumble from William Powell to give the Blue Bombers the ball on Saskatchewan's 32-yard line.

This report from The Canadian Press was first published on November 17, 2019.