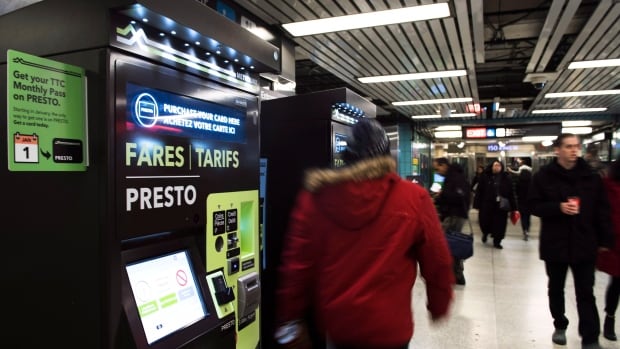 As the transit agency in Canada's most populous city prepares to wipe out its decades-old payment system, the union representing transit workers is asking the Ontario government to intervene and repair what it describes as defective technology in replacing high tech.

December marks the last month that Toronto passengers will be able to use the Metropasses on TTC as the bus, tram and subway network moves to Presto, an electronic card payment system primarily used in southern Ontario. By mid-2019, traffic tickets and tokens will also be eliminated.

But the Amalgamated Transit Union Local 113 sent a letter to Premier Doug Ford urging the government to take "immediate and urgent action" to address what it regards as an unreliable system, whose machines often break down.

"We want (the government) to address the fact that the Presto system has failed," union spokesman Kevin Morton said. "It's just a disaster."

He said the union believes that the TTC will not be able to deal with the flow of Presto users, since card readers fail regularly and take a lot of time to repair, which, he said, could lead to a loss of revenue .

The province did not immediately respond to a request for comment on the letter.

But Anne Marie Aikins, a spokeswoman for Metrolinx, which oversees Presto, said the reliability rate for card readers on buses and trams is 98 to 99 percent per week.

"We are very confident that Presto is ready to transition away from Metropasses," Aikins wrote in an e-mail.

The TTC called the Metropass "one of the pillars of TTC pay for nearly 40 years and a regular accessory in the lives and wallets of nearly 300,000 Torontonians every month."

More than 78 million monthly passes have been sold since they were introduced in 1980 for a cost of $ 26. Today, they cost about $ 150 and after December 31, transportation passes are only available through Presto .

TTC began offering Presto as a payment method in 2011, and TTC spokeswoman Heather Brown said more payment options, such as the monthly pass, are available through Presto in recent years.

By 2017, the TTC had about 1.7 million customers every day of the week, according to the website of the transit agency. Aikins said there are about 1.3 million Presto card holders who use the TTC and approximately 800,000 ring tones in card readers per day.

Brown said the TTC will be preparing for the increase in Presto users by having more traffic workers present at Presto's vending machines to assist passengers. She said that maintenance workers will also be on hand to repair the broken readers "within a reasonable period of time."

Brown said that Presto readers are repaired in 24 hours. She said buses and trams have two readers, and if the two are down, TTC passengers must pay at their destination.

Concerns about loss of revenue

But Morton said he worries Presto readers will break, which will make it easier for passengers to evade paying the fare.

He said that before the union sent the letter to the province, a memo was sent to its members about the transition from Presto. Morton said the union received "hundreds" of replies from members citing concerns from passengers who can not afford it because readers are broken.

In the union's letter to Ford, a number of anonymous TTC workers are quoted stating that readers fail on a daily basis and sometimes take days to repair.

Morton said he predicted the TTC would lose "a fortune in revenue," as passengers could avoid paying the fare by entering the back of a bus or tram and not hitting the Presto reader. He said that if a TTC driver is caught and fined for failing to pay, he says it will be easier for the person to fight the fine in court, arguing that the Presto player has been broken.

Morton added that a loss of revenue can easily be confused with a loss of passengers.

Brown said that if TTC passengers are caught committing fares, they could be fined up to $ 425.