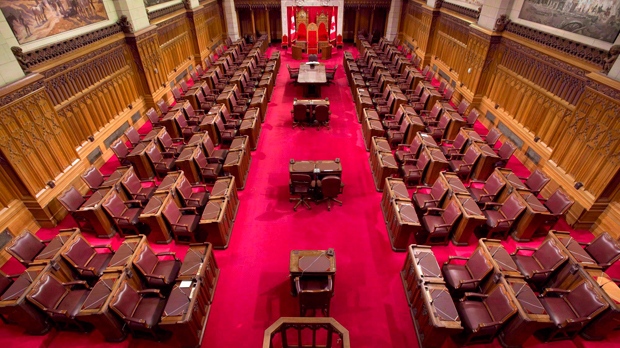 OTTWA – Justin Trudeau says his administration hopes to make legal changes that will cement its transformation from the Senate into a more independent and nonpartisan chamber, making it more difficult for a future prime minister to go back on the clock.

The prime minister says his government will amend the law of the Parliament of Canada – the law that enunciates the powers and privileges of parliamentarians and senators – to better reflect the new reality in the upper house, where most senators sit as independent affiliates. any political party.

"We'll try to make it fair," Trudeau said in a round-table interview later this year with The Ottawa Press's Ottawa office. "We'll try to do this before the elections."

Doing so before next autumn's election is critically important to independent senators who fear that Trudeau's reforms could easily be reversed if liberals do not get re-elected.

Conservative leader Andrew Scheer said that if he became prime minister, he would return to the previous practice of making openly partisan appointments, appointing only conservatives to the upper house.

Trudeau expelled the senators from the liberal bench in 2014. Since taking office in 2015, he has appointed only senators recommended by an advisory body in an attempt to return the Senate to his role as an independent chamber of a second sober thought.

Of the 105 senators, 54 are now independent who have come together to gain greater influence in the Independent Senate Group. Another 31 are conservative, 10 are independent liberals and 10 are not affiliated. Conservatives are the only openly partisan group in the chamber.

However, the Canadian Parliament Act recognizes only two party conventions in the Senate: the party partisan of the government and the Opposition party, both entitled to research funds, giving time to debate bills, committee affiliations, and a role day to day. day-to-day business decisions in the Senate, such as postponing the debate.

The senators agreed, in real time, to accommodate the growing ranks of independents, giving them some research funds and committee functions. But the ISG leadership argued that its role should be explicitly stated and guaranteed in the Canadian Parliament Act. And, since the change would involve the allocation of financial resources, they say it can not be initiated by the Senate, only by the government in the House of Commons.

Senator Raymonde St. Germain, the ISG's deputy leader, said the amendment to the bill is the only way to give independent senators a "permanent voice" and "ensure that essential reform for an independent and non-partisan Senate."

"The reform that Prime Minister Trudeau very boldly announced and implemented … needs to be completed," she said in an interview. "It will not come from within the Senate. The only way to complete it, to end it, is to amend the Law of the Parliament of Canada."

Trudeau said he was pleased with the way the reformed Senate operated, although independent-minded senators are now more likely to alter government bills, which has somewhat delayed the legislative process and occasionally sparked fears – hitherto unrealized – of that the Senate could defeat the legislation immediately.

"Canadians have been able to see the benefits and weighted amendments and engagement they have had with the bills in a way that I think has been very positive. I think removing partisanship significantly from the Senate has been good for our democracy "good for institutions," he said.

As for Scheer, Trudeau said, "If he really wants to get back to the kind of partisanship and patronage that we were able to eliminate, well, that's something he'll have to explain."

"I do not think membership in any political party should prohibit them from being thinkers, independent senators who are not responsible for me, but respond to the values ​​they have," Trudeau said, adding, "I'm sure we've also named people who donated to the NDP or donated to the Conservative Party. "

Conservatives have repeatedly questioned how nonpartisan independent senators are, noting that most seem to share Trudeau's values ​​- a charge that Trudeau did not deny.

"I will not choose people who are completely offline with what I think my values ​​or values ​​of many Canadians are," he said. "A future prime minister from a different political background will certainly be able to nominate people … who may have a slightly different ideological bias. I think this will happen naturally in our system."

However, he said that the institution is better by the fact that most senators are not accountable to the prime minister and do not sit in party caucuses "to plot the political strategy."