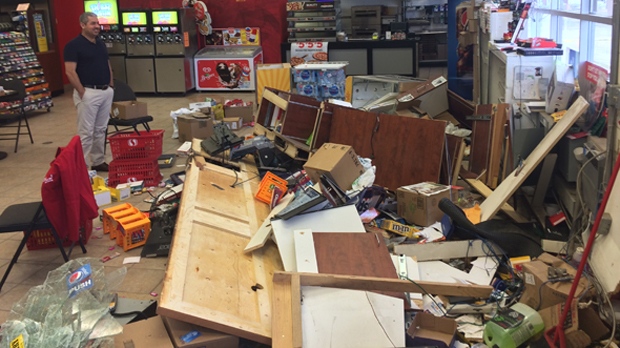 The latest in a series of ATM robberies in southern Alberta has a businessman predicting it will take at least a month to rebuild his store.

In the early morning hours of Monday, January 7, a suspect was granted access to a convenience store in Crossfield outside of business hours.

"The robbery happened around 4:40 a.m.," said Khair Alghebari, owner of the store. "He broke the front door, went to the ATM, tied it, dragged it and basically damaged the entire front area."

"He pulled the ATM out and dragged it all the way, probably about two miles from here."

The theft was captured by the store's surveillance cameras and the stolen ATM casing was later recovered from an area outside of Crossfield.

Alghebari says there were major losses to the store's customer area, including the counter, three point-of-sale systems, cabinets, shelves, goods and the telephone system.

"The damage he caused because he had to steal the ATM is probably out there, I would say, $ 150,000," said Alghebari. "He killed the business because this is the heart of the business. Now we can not do anything.

According to the RCMP, there have been a total of seven cases of robbery or attempted robbery since Christmas Day in the communities of Airdrie, Strathmore, Cochrane, Okotoks and Crossfield. Calgary Police Service officials said there were eight ATM robberies in Calgary in December.

"They seem to be more common as of late," explained the Cpl. Gina Slaney of Airdrie RCMP. "We're asking business owners to be aware that this is happening now. There are things they can do – report any suspicious behavior."

Slaney says thieves often visit the site before the robbery to get a feel for the layout of the business.

Alghebari has owned his company in Crossfield for about 20 years and he says he received a great deal of support after the robbery.

Anyone with information about the theft of an ATM in Crossfield or any ATM theft is encouraged to contact the police.

With files from Jordan Kanygin from CTV