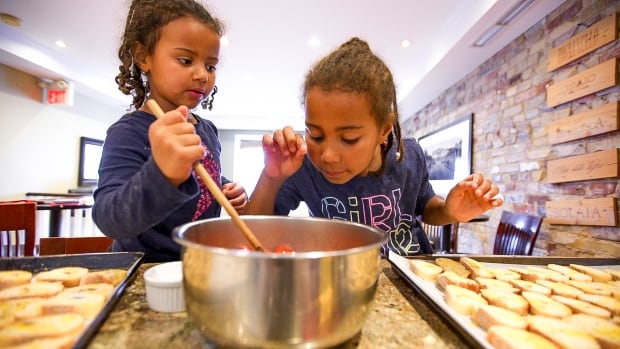 A rainbow of lively food illustrations hung on the classroom wall – this is how most Canadians remember Canada's Food Guide.

But behind this brilliantly colorful document is a long history of political disputes and industry lobbying – a tradition that continues to this day as Health Canada prepares to introduce a revised food guide sometime in the coming weeks.

It seems that no detail in the new food guide is too small to focus on, including whether Canadians prefer a blue or green document and would like to see actual pictures or pictures of food.

It should be a science / health document. And it was politicized beyond belief.– Nick Saul, Community Food Centers of Canada

Meanwhile, Canada's dairy industry is warning that the proposed changes in the food guide may hurt the dairy industry. And there have been reports of interinstitutional pressure, with Ministry of Agriculture officials lobbying the Ministry of Health on behalf of the industry.

How has a guide to healthy eating become so complicated? Because from the outset, Canada's Food Guide has been a political document. 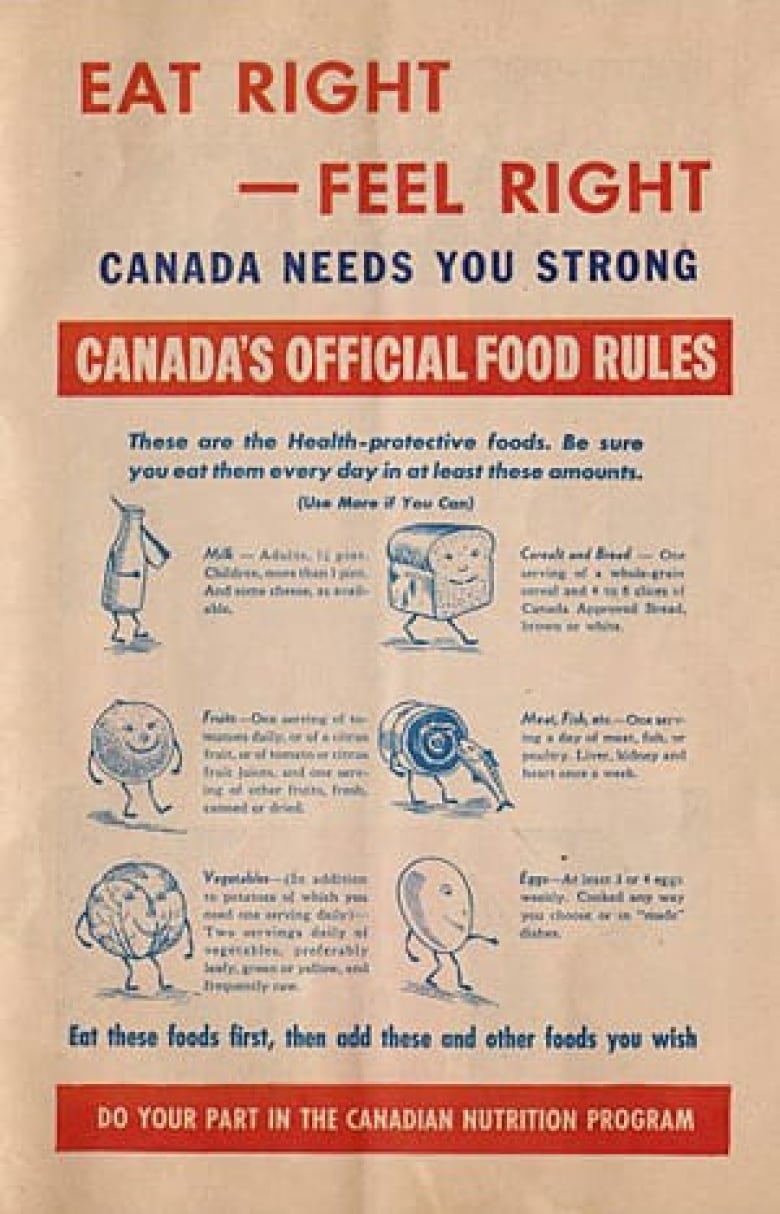 The Official Canadian Food Rules were first introduced in 1942 with the aim of improving nutrition among Canadian soldiers fighting in World War II. (Swift Canadian Co.)

In 1942, the "Official Canadian Food Rules" were developed to fatten Canadian soldiers so they could fight better in World War II.

"In World War II, that made a lot of sense," said Guelph University food historian Ian Mosby, who studied the history of Canada's Food Guide. "It was about producing the next generation of soldiers, the next generation of industrial workers. And the problem at the time was this perceived malnutrition problem."

The food guide has been revised seven times since, with the current version being updated in 2007.

"It has become increasingly difficult to get things off the food guide, or to recommend that Canadians eat less of the food guide," Mosby said. "It still reflects some of these ideas – these fossilized ideas of how we should eat."

And over the years, the food industry has continued to push for more prominence. 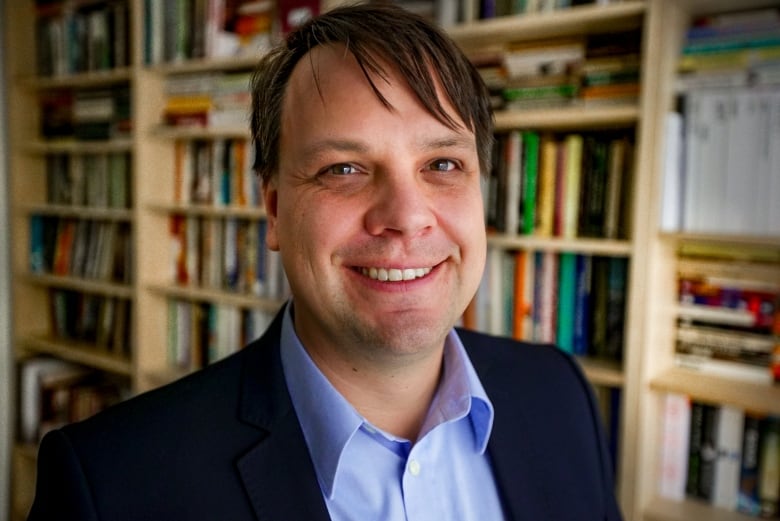 In 1992, Health Canada increased the recommended portions of meat and dairy products in response to industry pressure.

All of this industry lobby has undermined the credibility of the food guide, according to a Health Canada research paper prepared as part of the Food Guide Review.

This time, the Health Ministry stated that "during the development of Canada's new Food Guide policy, Health Canada's Office of Nutrition Policy and Advocacy will not meet with representatives of the food and beverage industry."

But there are reports of industry officials lobbying other departments of the federal government over the revisions. And some of the fears of the industry have been described in a report by the federal agricultural committee, entitled The Food Policy for Canada.

"They fear that the revised guide will favor one food group over another, including sources of plant-based protein over animal sources. The Canadian National Millers Association is concerned that the new food guide can encourage consumers to give up white bread, hamburger and hot dog breads and other baked goods made with enriched flour. "

In response to these concerns, the committee officially recommended that, during the review of the food guide, "… the government should work with the agricultural and agri-food sector to ensure the alignment and competitiveness of domestic industries."

But Canada's official guidance on a healthy diet should be concerned about the effect on the industry?

"It must be a science / health document – and it has been politicized beyond belief," said anti-poverty activist Nick Saul, co-founder of Community Food Centers Canada. 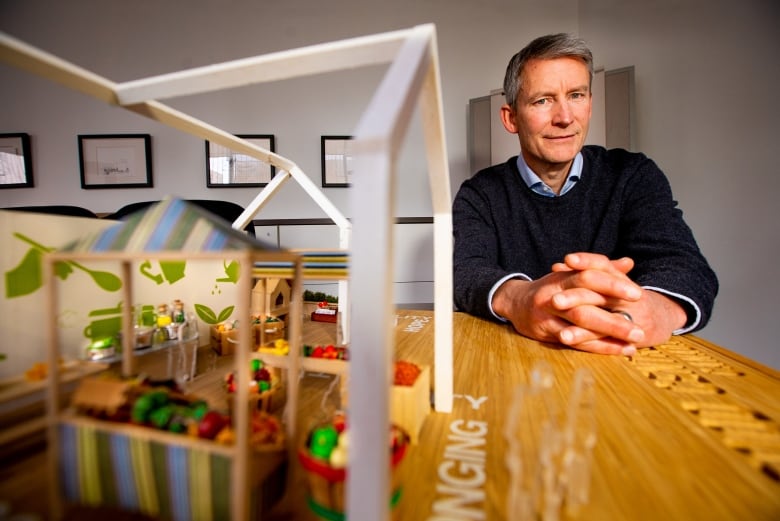 Nick Saul, president of Community Food Centers Canada, participated in Health Canada's online guide to food guides. He is concerned about the industry's influence on the new recommendations.

Saul, who participated in the online consultations, is concerned about how the industry may have influenced the food guide review process.

"Unhealthy foods are the main risk factor for death and disability, so what we put in our body is extremely important.We have a food system that is very focused on sales and profits and the food that is often produced by this system not good for our health. "

"If the food guide does a good job, certain industries will be upset," Mosby said.

The first prototypes sent to focus groups showed that the four family "food groups" disappeared. Meat and dairy products no longer have their own category: they are grouped into "protein foods".

Other flashpoints include fruit juice: will it remain listed under "vegetables and fruits?" Or will it disappear completely from the food guide?

Health Canada tried to end the controversy by promising the new food guide would still recommend a variety of foods.

"As indicated in the proposed guiding principles, the new food guide will continue to recommend that Canadians choose a variety of nutritious foods and beverages, including low-fat milk and yogurt, and low-sodium and fat cheeses," said spokesperson Geoffroy Legault-Thivierge. in an email to CBC News. 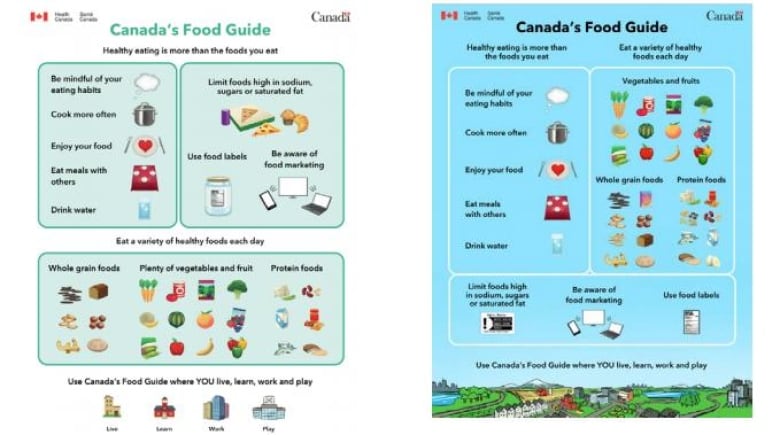 Canadians ignoring the advice of the food guide

The current food guide was introduced 12 years ago – and the familiar rainbow creates a strong "brand recognition," according to Health Canada's market research.

But while Canadians may recognize the Canada's Food Guide, they are not following their advice on what to eat.

"Less than half of the food choices in the dairy group were" aligned "with food orientation guidance," Health Canada's evidence review revealed. "And more than 60 percent of the choices in the meat group and alternatives did not match the food guide's recommendations." 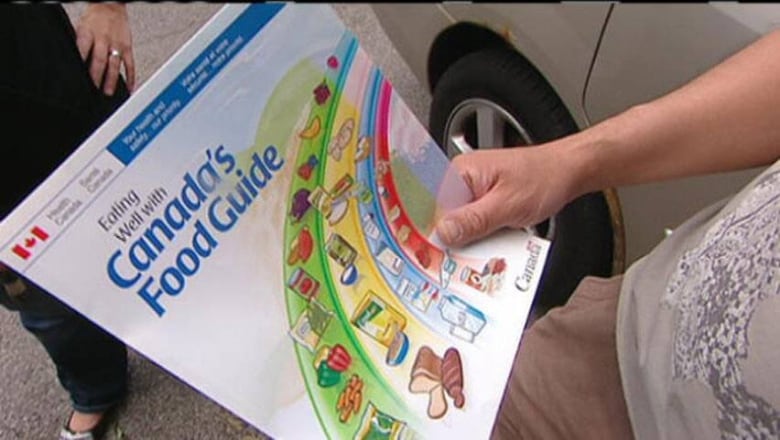 The Food Guide for Canada was last updated in 2007.

Most Canadians had "low intake of vegetables and fruits, milk and alternatives, and whole grains," the report said. "About one-third of total calories came from foods high in fat, sugar or salt."

Most people could not even eat a bunch of green or burnt vegetables every day – even if the food guide recommended it.

The Canadian Health Ministry also found that most Canadians get their advice on nutritional information from other sources; Canada's Food Guide ranks fourth, behind the internet, friends and television.

It is not possible to address real barriers to healthy eating

Health Canada is also testing lifestyle advice on the preliminary copies of the food guide. There are suggestions to "be aware of your eating habits," "savor the food," and "cook more often."

But social barriers to healthy eating can not be overcome by a simple document, Mosby said.

"It's the idea that people are not healthy because they do not know how to eat. But there are all these structural reasons why people can not afford healthy food, they do not have time to cook healthy food.

"The people to whom the food guide is actually destined are already struggling to survive, so the importance given to the food guide may be misleading."

So when exactly can Canadians see the new food guide?

"While an exact date for the release is to be determined, we hope to launch the new food guide in early 2019," Health Canada said.