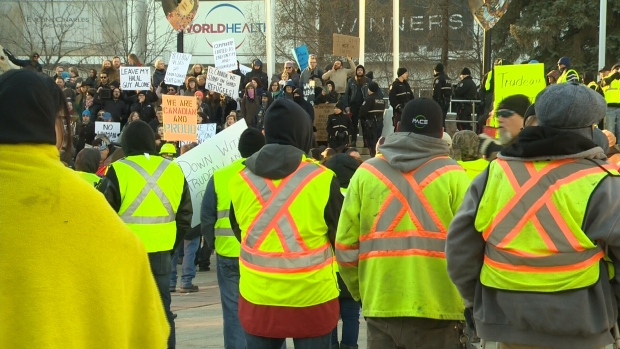 A demonstration in central Edmonton led to some tense moments between two groups of demonstrators.

Hundreds of protesters gathered in the Alberta legislature on Saturday morning wearing yellow vests to protest against a number of things, including the United Nations, the carbon tax and Prime Minister Justin Trudeau.

The vests are similar to those used by Parisians leading an anti-tax movement in the French capital.

It is a movement that is gaining momentum all over the world. Belgium, the Netherlands and England had protests of high profile yellow vests in the previous weeks.

In Alberta, Edmontonians and Calgarians demonstrated against high taxes – but they also focused heavily on one of the province's most important assets.

"I'm tired of Trudeau basically doing what he wants with our money and sending him overseas," said Turk, a yellow-robed protester. "Now, personally, I'm facing a crisis at work. All our oil jobs are gone, all our money is going south.

The group headed toward Winston Churchill Square, where a smaller group of counter-demonstrators appeared. Many of this group had posters denouncing the anti-globalist protesters, calling them fascists and racists.

"I am here to combat racism and fight the hatred that is being created by this group," said Adebaya Quinitiiti, a counter-protester in Churchill Square. "That anger they have will separate them. Things can be discussed without hatred, without racism. "

When people began to fill the square, some fights between the two groups broke out.

Several protesters were arrested and dozens of police were placed on the scene to monitor the hostile situation.

It is unclear who is responsible for organizing the original protest. Online, the Canadian Coalition of Concerned Citizens received credit, while at Churchill Square the National Citizens Alliance said they were the ones who started the protest.

Similar rallies were also held in Red Deer and Calgary.

With files by Timm Bruch