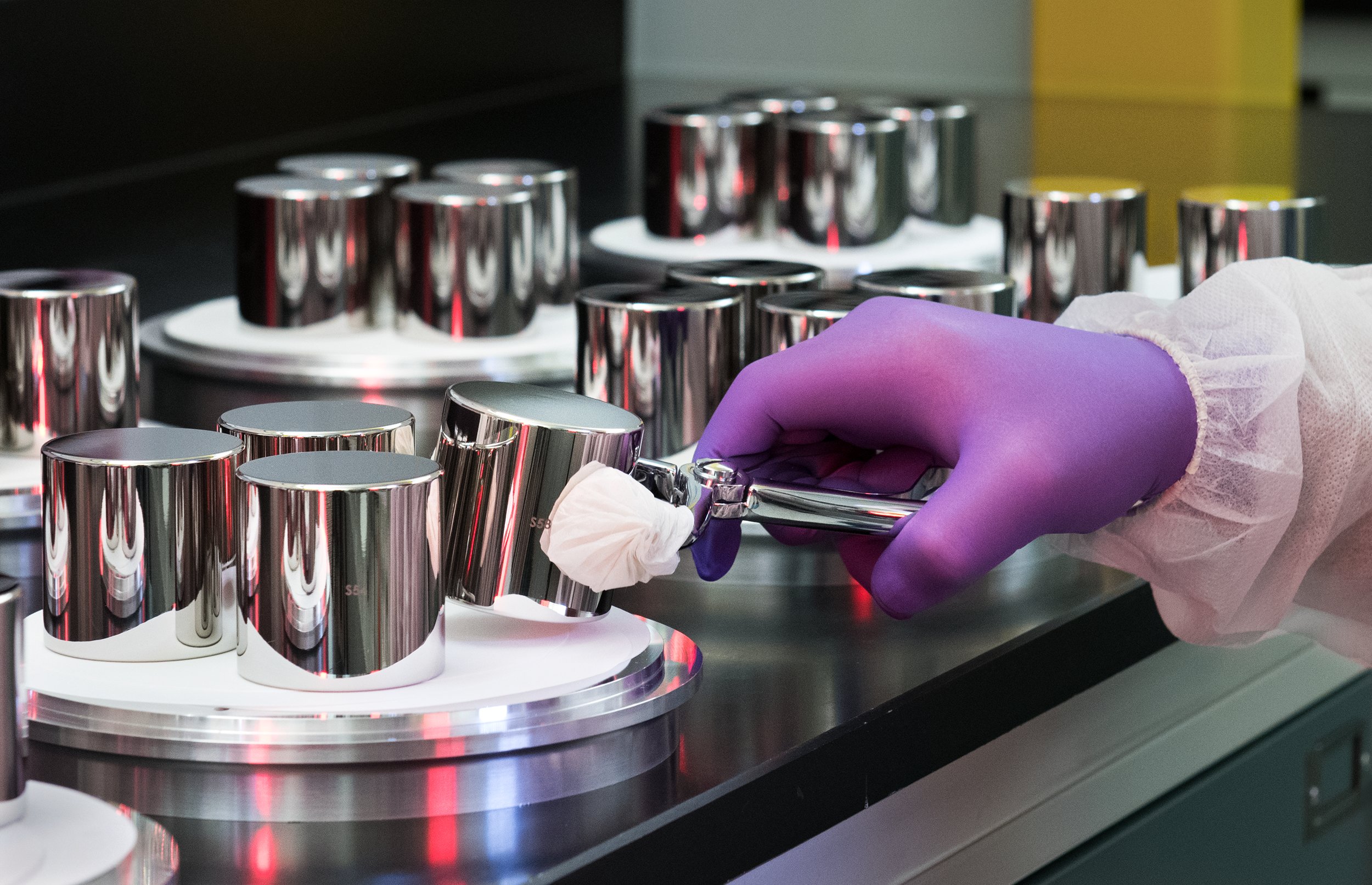 When two nominally identical masses of kilograms are no longer identical? When each goes to a different place and absorbs varying amounts of moisture and contaminants.

In exploring this, the US National Institute of Standards and Technology (NIST) and the National Research Council (Canada) are collaborating with measurement laboratories in North, Central, and South America to better understand how precision masses increase and decrease over time.

They expect the results to benefit international trade, in which even small measurement inaccuracies can have significant impacts.

To ensure that a pound of potatoes in the grocery store actually weighs a pound, the balance of a store should be calibrated regularly. For this type of calibration, consumers rely on mass artifacts, pieces of metal whose mass was accurately measured. Scientists know the mass because each artifact, in turn, has been compared to other artifacts in an uninterrupted chain of comparisons that goes back to the fundamental definition of the mass itself.

Standards laboratories maintain a series of mass artifacts for comparisons like these, which are used to calibrate everything from grocery scales to bathroom scales. From time to time, these labs require an additional mass or replacement artifact for their collection.

In the early months of its life, however, the mass of a new artifact can change significantly as the newly cut metal absorbs molecules from its environment.

There is some disagreement about how long scientists should wait before they can be sure that the mass of a new artifact is stable. So, NIST and NRC Canada designed the huge new experiment to help solve this problem.

The experiment involves 60 nominally identical one-pound pesos, ordered to be made from a single high-grade stainless steel rod. About half of these 60 units were distributed to 29 countries of the Inter-American Metrology System (SIM), a network of national metrology institutes (NMIs) located in North, South and Central America, as well as island nations.

For a year or more, SIM representatives for each country measure the mass of their artifact every few months and submit NIST and NRC Canada data. They will also monitor the environment of each mass, including laboratory temperature, barometric pressure, humidity and volatile organic compounds (VOCs), a measure of air quality.

"The whole thing is going to be a huge study of stability on a scale that no one has ever done before," said NIST physicist Patrick Abbott. "Since the masses are drawn from the same steel rod, you would expect them to have the same long-term response." However, conditions in different SIM laboratories are expected to affect the rate at which the masses change, depending on qualities such as altitude and the amount of salt in the air. In the first months of their lives, the masses were kept in the US and Canada. Now half of them will be stored in laboratories near the equator and well in the southern hemisphere.

"So how will the masses change?" Abbott said. "When they get there, they will not necessarily follow the same pattern as in North America."

A new, recently cut artifact is like a sponge: it collects molecules from the air and this increases its mass a little over time. The new artifacts used in this experiment are less than one year old and therefore at a relatively fast weight gain stage of 7 micrograms (millionths of a gram) over six months. This may seem too small to import, but even small changes – especially if they are unpredictable – can lead to uncertainties in laboratory measurements.

"These weights are changing," Abbott said. "They're picking things up from the air – like the black pants of a house with a white cat."

At some point, this process usually stops or decreases significantly. The question is: how long does a laboratory have to wait to be sure that its mass has reached a stable phase? And how does this period change depending on the location of the laboratory and the average environmental conditions?

Previous studies tend to be small-scale, conducted in a single laboratory. Abbott and his colleagues at NIST and NRC Canada wondered if a large-scale effort would help resolve the discrepancies in previous results.

"At this time, many of the studies that were done were very localized: a laboratory, a person, under a set of conditions," Abbott said. "But another person in another lab can do the same study and say," Under these conditions, we get something completely different, "he continued. So, who's right?

"I hope this study will be able to answer the question: if you buy a mass for your laboratory, what is a reasonable expectation of when you would really be able to put it into service and have confidence in it?" Abbott said.

Before distributing the artifacts, NIST and NRC Canada characterized them completely by measuring their density as well as their magnetic susceptibility, a quality of how the material behaves when exposed to a magnetic field. Each institute received half of the masses: the NRC Canada received the peers, and NIST received the odd numbers.

To measure the densities of their half-weights, Canadian scientists used a hydrostatic technique that involved weighing each artifact successively in fluids of different known densities. Meanwhile, NIST performed its tests aerostatically, using a pressure chamber that could weigh artifacts at different air densities.

Although all masses should be nominally identical, Abbott was surprised to find that the first 15 weights he measured had a distinctly different density from the second. He feared he had made a mistake – until he discovered that his Canadian counterpart had measured the same discrepancy in their weights.

"It turned out that the manufacturer used two different steel bars that had slightly different densities," Abbott said, "and we saw that in our measurements."

When they exchanged data to see how close the numbers were, Abbott said, "It was beautiful, just beautiful. We used two very different techniques, and there was excellent agreement for this study."

Earlier this month, NIST and NRC Canada distributed 29 of the 60 masses, one for each of the participating South and Central American countries. The remaining artifacts will be maintained and monitored by NIST and NRC Canada until the study is completed.

Until 19 May 2019, the world-wide mass definition will continue to be based on the International Prototype Kilogram (IPK), a metal cylinder wrought in the late 19th century and kept in a laboratory outside Paris, France. After that date, the formal definition of a kilogram will be redefined to be based on a fundamental constant of nature. However, kilogram artifacts should still be used in many applications, including the dissemination of the new mass standard.