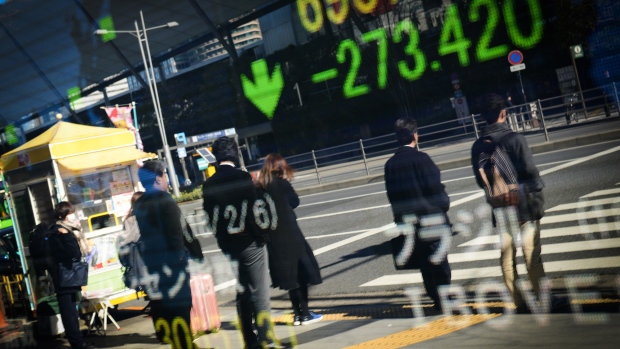 US stocks were mixed in the open market, as investors' appetite for risk seemed satisfied after last week's rebound amid resumption of trade talks with China. The US dollar has dropped to its lowest level since October with traders evaluating Federal Reserve Chairman Dovish comments, Jerome Powell, on Friday.

The S & P 500 index fell due to weakness in stocks of utilities and consumer goods, while Nasdaq benchmarks rose slightly in relation to stocks of telecommunications services. The Stoxx Europe 600 index fell for the third time in four sessions.

Investors are still struggling to choose a direction after the wild end of 2018. Powell's seemingly relaxing comments on Friday and China's measures to strengthen its economy have lifted some moods but the stakes are high. And US lawmakers still can not reach agreement on the budget, leaving the federal government closed for the third week.

New trade talks between the US and China helped weaken demand for the dollar, while Treasury yields fell after a rise on Friday. The pound fell against the euro, while UK lawmakers sought to avoid an uncommitted Brexit. The common currency remained solid even as data showed that orders to German mills fell more than expected in November.

Here are some events that investors can focus on this week:

A US delegation is in Beijing for business talks with Chinese officials, the first face-to-face meeting since Trump and Xi agreed to a temporary truce on Dec. 1. Wednesday sees the release of Fed policy minutes at 18-19. meeting. Powell will speak to the Washington D.C. Economic Club on Thursday. The UK parliament is retaken in a debate over Brexit's withdrawal law with Prime Minister Theresa May trying to avoid defeat in a vote scheduled for the week of 14 January.

BNN Bloomberg commentator Andrew McCreath says the "big appeal" to markets this year is whether Donald Trump and Xi Jinping make trade peace or not. He also says the focus of US Federal Reserve Chairman Jerome Powell has always been and will always be the state of the US economy, not the markets.

These are the main movements in the markets:

The S & P 500 fell 0.3 percent from 9:41 am in New York. The Stoxx Europe 600 index fell 0.5%. The MSCI All-Country World Index was little changed. The MSCI Emerging Market Index jumped 1.2 percent to the highest in almost a month.

The Bloomberg Dollar Spot Index has declined 0.4% to its lowest level since October. The euro rose 0.5 percent to $ 1.1448, the highest gain in more than a week. The Japanese yen rose 0.2 percent to 108.29 per dollar. The British pound rose 0.3% to $ 1.276, the strongest in more than a month. The MSCI Emerging Markets Currency Index advanced 0.4 percent to the highest in six months.