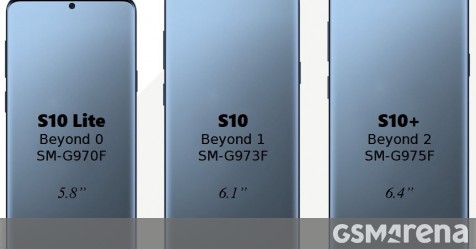 The famous leakter Evan Blass has just published three versions that are supposed to be the next Galaxy S10 line from Samsung. However, the post explicitly states that the images are based on the expectations of a cabinet maker.

According to the renders, the smaller and more affordable S10 Lite would have a 5.8-inch display with a hole for the camera in the middle, while the regular S10 will have a 6.1-inch panel with the same front camera design.

Expectations of a cabinet manufacturer for the Galaxy S10 line: pic.twitter.com/lrExjvalcb

The larger S10 + version will have a huge 6.4-inch screen and two holes for a dual-camera setup.

The renders are probably based on the rumors so far, so we suggest bringing the news with a healthy portion of skepticism. But on the other hand, the report comes from a source worthy of trust and coincidentally, Ice Universe (another reputed leakster) confirms the screen sizes in a response under the post. At least we can take screenshots of that.