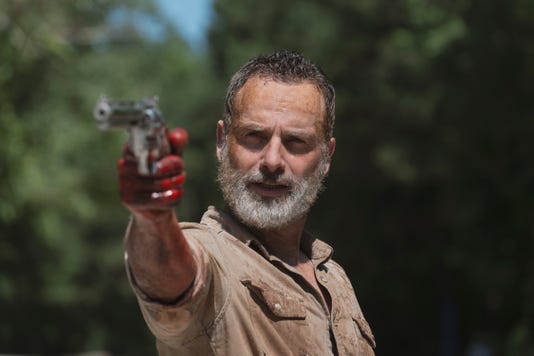 Rick Grimes (Andrew Lincoln) makes his last appearance in "The Walking Dead" in the last episode of the character and the actor who played him for nine seasons.(Photo: Gene Page, AMC)

Spoiler alert: This story contains significant details of the Sunday episode of "The Walking Dead."

The Sunday episode of "The Walking Dead" was presented by AMC as Rick Grimes' Last Episode. In the end, however, the protagonist of the zombie action thriller seems to be 180 degrees from the series title: but he does not is dead too.

What that means to Rick, since this is the last episode of the series for the character and the actor who plays him, Andrew Lincoln, nobody knows. But a number of TV movies will continue their story, AMC announced on Sunday. But we'll get to that.

At the end of last week's episode, viewers saw Rick impaled on the rebar protruding from a concrete slab after his scared horse threw it as a group of hikers approached. But there was no way Rick was going to end up like a zombie, which would have been an ignominious end to the wandering killer hero.

When the Sunday episode begins, Rick is back at the hospital where the series began. Of course he is in a hallucinatory state while he is talking to his previous bedridden self, who awoke from a coma to discover that the zombie apocalypse had begun. 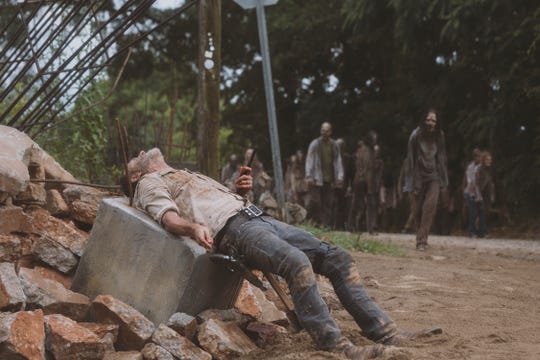 Rick Grimes (Andrew Lincoln) is in trouble after being impaled on rebar after his horse has thrown him on AMC's "The Walking Dead." (Photo: Jackson Lee Davis, AMC)

Back in the real world, the clever lawman pulls a MacGyver, tossing his belt over another piece of rebar and rising from where he was trapped. He escapes the horse suddenly calmly, and in true selflessness, tries to guide the horde of walkers away from the fields of his companions, even while he is bleeding profusely.

At the same time, junkyard Jadis (Pollyanna MacIntosh) – who has abandoned her alter ego, Anne – is trying to escape from Father Gabriel (Seth Gilliam), Rick and the other survivors after their secret partnership with a mysterious group that owns a helicopter. found.

She made a deal for exfiltration; she has to surrender a survivor, though she fails to lead Gabriel, with whom she has developed an emotional and romantic bond. Jadis's background story will play a significant role at the end of the episode. (There's also an important story about Negan, which puts Michonne against Maggie, but Rick's fate is the main event.)

The action changes back to the main stage, as Rick's disappearance, his blood staining the white coat of his horse, begins to hallucinate again, taking longtime fans back to moments and memorable characters. In an appropriate retrospective, viewers see Rick in a famous photo of the first season as he rides a horse on a road outside Atlanta with thousands of people walking in the photo. 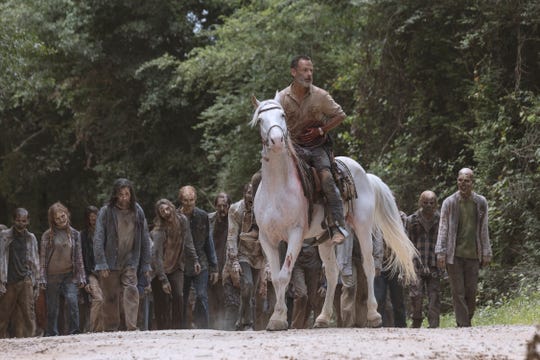 With the zombie hikers in pursuit, Rick (Andrew Lincoln) rides a horse after freeing himself from a rebar bore in AMC's "The Walking Dead." (Photo: Jackson Lee Davis, AMC)

Rick comes again – he jumps up and down between consciousness and unconsciousness – just in time to escape the macabre masses, taking refuge in an abandoned house where he wears a bandage on his side. He walks away. During his hallucination, he encounters a familiar face, former Sheriff Shane's partner (Jon Bernthal), who became a rival killed by Rick in Season Two.

When Rick says he's looking for his family, Shane says it can be his, since Rick believes his daughter, Judith, is actually Shane's daughter from a relationship he started with Rick's wife, Lori, when they thought he was dead.

Suddenly, Rick relives of his trance as a hiker is about to bite him. He escapes from the house. The horse, of course, is right there. While Rick is riding, he faints again and finds himself on a beautiful farm with the long-dead Hershel, Maggie's father and a wise mentor to Rick. As Rick explains that he needs to find his family, Hershel (Scott Wilson, who died in early October) knew that he did not warn him to wake up – because the zombies are approaching!

In his next hallucination, Rick is back at the first hospital, through the doors that were barred to hold the walkers. He enters an area full of bodies, including those looking back as his son, Carl, and Hershel's daughter, Beth, who died early in the series. Suddenly, another deceased survivor, Sasha (Sonequa Martin-Green, perhaps radiant from "Star Trek: Discovery") gets up and tells a pissed-off Rick that everything is fine despite the bodies. 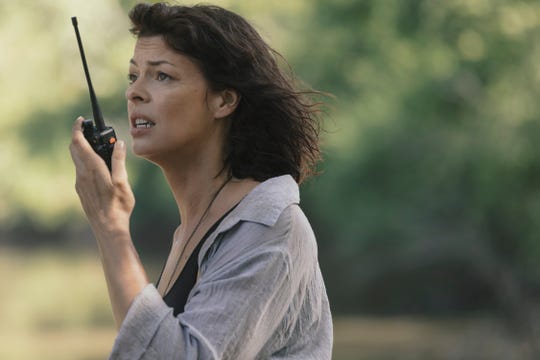 Anne (Pollyanna McIntosh), or is Jadis again, is entwined in Rick Grimes saga as he tries to escape the survivors in "The Walking Dead" of AMC. (Photo: Jackson Lee Davis, AMC)

"You did your part, as I did mine. They gave us the strength we needed to do what we had to do for others. The others take strength from us. We change, we help each other, we improve each other and it never ends, "she says.

Sasha then says hallucinating Rick to wake up, just as he is falling off his horse in reality. He fights some hikers then heads for the bridge he was so focused on mending during the first few episodes this season.

When he arrives at the bridge, he envisions his allies – Daryl, Carol, Eugene and his beloved partner, Michonne – coming to their rescue, but they are not really there. He revives again, but the hope that the bridge may collapse under the weight of the horde does not materialize.

The zombies approach, just like Daryl and the others – this time for real – but they can not save Rick. A walker tips down some dynamite on the bridge, and Rick chooses his final option. He shoots at the explosives, blowing up many zombies – and apparently himself – while other hikers fall into the river. 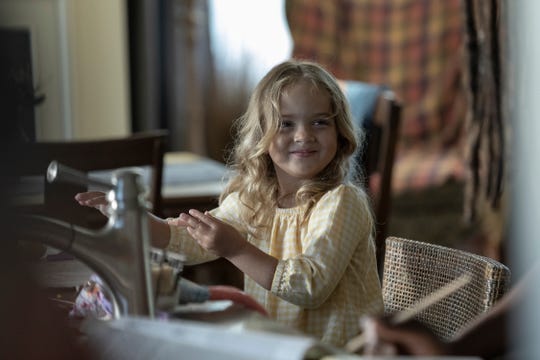 Toddler Judith (Chloe Garcia-Frizzi) suffers greatly from the transformation at the end of the Sunday episode of "The Walking Dead" of AMC. (Photo: Jackson Lee Davis, AMC)

Michonne screams silently as Maggie and Carol try to comfort her. A discouraged Daryl walks away.

The scene cuts off Jadis, still awaiting his own evacuation, as he watches dead zombies floating downstream before seeing Rick, barely alive, on the beach. The helicopter, seen in an earlier episode, flies away. "You'll be fine," says Jadis Rick, who is lying on a stretcher. "I'll save you."

The action cuts to a new scene where strangers are struggling to fend off another group of hikers who are taking advantage of the largest amount of screen time at ages this season. An invisible shooter shoots some walkers, allowing people to escape.

The shooter is Rick's daughter, Judith, but she is no longer a child. She is at least a few years older, a young authority wearing her father's hat, her brother's favorite accessory, armed with a gun, a father's reminder, and a katana sword, the symbol of Michonne, who became her stepmother.

It's the future. And Rick is not there anymore. But the first of the new films will "explore the story of where Rick is taken and what he faces in a new corner of the zombie apocalypse."

AMC also says the "The Walking Dead" universe will expand further with other specials, series, movies and digital content.