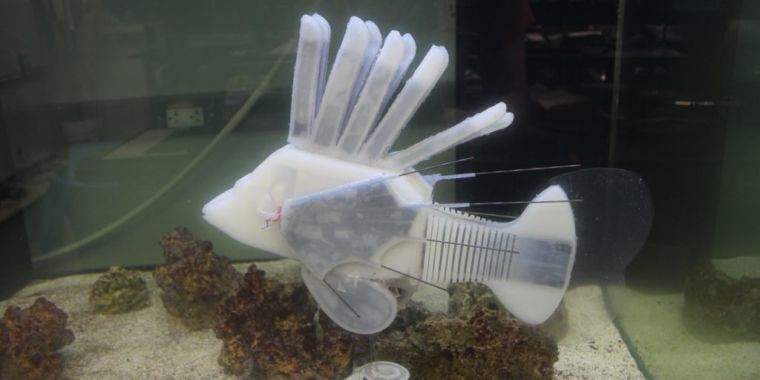 Many experimental robots involve a bit of cheating. Instead of containing all the necessary electronic and energy sources, they have ropes and wires that provide power and control without weighing the robot or taking up too much internal space. This is especially true for soft-bodied robots, which normally pump air or fluids to boost their movement. Having to incorporate a power source, pumps, and a gas or liquid reservoir would significantly increase the weight and complexity of the robot.

A team at Cornell University has now demonstrated a clever turnaround that reduces the weight and density of all this by figuring out how to get one of the materials to perform two functions. Like other soft robot designs, it pumps a fluid to make its structure expand and contract, boosting the motions. But in this case, the fluid is also the key component of a flow battery that feeds the pumps. This allows them to place all critical components in their creation.

Going not in the mood

So what is a battery flow? The batteries operate with different reactions that occur on both electrodes. For something like a lithium-ion battery, the intermediates of these reactions – electrons and ions – flow immediately from one electrode to another, and the major chemicals spend most of their time on the electrodes. In flow batteries, chemical reactions still occur on electrodes, but chemicals reside in solution, rather than being confined to electrodes.

Because solutions have limits on the concentration they can get, this approach tends to limit the energy density of the flow batteries, putting most chemicals well below what we can achieve with lithium-ion batteries. But they have one big advantage: the energy storage is limited only by the amount of liquid you can store. This makes the flow batteries optimal for situations where energy density is not important, such as storing renewable energy for use on the network.

In this case, the authors would undoubtedly love to have the kind of energy density that the lithium ion provides. But the liquid component of a flow battery allowed them to increase the energy density in another way. Soft-bodied robots, as its name implies, do not have the kind of skeletons that typical robotic actuators can push. Instead, their locomotion depends on the coordinated expansion and contraction of different body segments. By expanding the top surface while contracting the bottom surface, a flat robot can move like a worm, to give an example.

This is administered by pumping some kind of fluid – liquid or gas – into or out of the flexible compartments of the body; changes in pressure can boost the necessary expansions and contractions. This makes the soft-bodied robot perfect for the fluid used in the flow batteries. Cornell's team draws an analogy between fluid and blood as it can traverse all segments of the robot and carry energy to them, both as a hydraulic force and as a chemical source of electricity.

That's the idea, at least. How was it implemented? To reduce the weight problems involved with fluid flow against gravity, the researchers decided to make a swimming robot modeled on a fish. But not just any fish – a lionfish, which has elaborate dorsal and pectoral fins and can perform views using them.

The dorsal fins were not articulated in this robot; instead, they are widely used for battery / hydraulic fluid storage. The pectoral fins (one on each side of the robot's body) are able to move and have a pump dedicated to moving the fluid in and out. A second pump drives swimming, made by filling and emptying sections of the robot's body. This body also contains on-board electronics (which communicates via bluetooth) and enough empty space for researchers to have to add weight to prevent the robot from simply rising to the surface.

The chambers that fill with the battery / hydraulic fluid to move the fish and the pectoral fins also contain the electrodes that allow the battery to work. These are a simple "felt" carbon with nickel spinning, separated by a membrane that prevents the mixing of the two liquid components, while allowing the passage of ions. The chemistry used for the battery is zinc iodide, which was chosen by a combination of high energy density (theoretically up to half of the current lithium ion batteries), neutral pH and low viscosity (important for a hydraulic fluid).

Put everything together and you will have a very slow fish. In a tank with a weak current, the fish can move about a year and a half long per minute, propelled by its tail. While this is very slow, it has resistance. The authors estimate that they could swim for more than 35 consecutive hours without needing a load.

This is a first attempt, and the authors have identified several problems with their design. For example, battery capacity begins to fade after just 10 cycles, in part because part of the battery solution begins to be absorbed by the silicon body of the fish. Because the design was very buoyant, it should be possible to add more energy by storing more battery fluid in the robot. The researchers also suggest that it would be more efficient to avoid pump reversal and redirect fluid flow using a valve in the pipeline.

And, of course, the design could be simplified and made more efficient if the display of the breast flap and all the hardware supporting it was eliminated. But this is not really the point; after all, the whole thing could be much more efficient by replacing the whole design with a lithium-ion battery and a propeller. But there may be things we specifically want to be robots of that type, and this hardware shows a clever way to extract better performance from them.