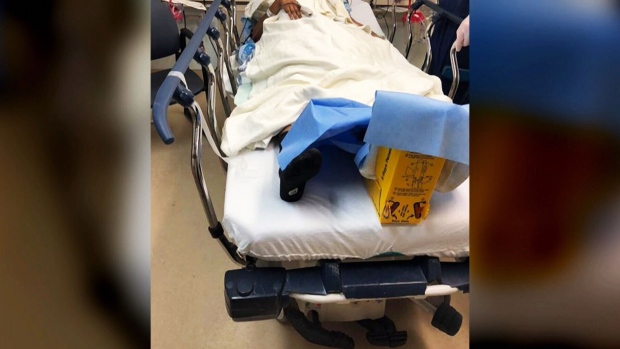 An Ottawa woman says she's lucky to be alive tonight after being hit by an OC Transpo bus at the southern end of the city. A video of witnesses capturing the moments after the horrific accident showed the woman being watched as she screamed for help.

"It was the most painful thing of all. I tried to catch my foot, people started to encircle me, they wrapped something around my leg to stop me from bleeding. When I touched my foot, I felt that my skin was not there.

Leila Giama, 26, said she was crossing the street after getting off the bus at the intersection of Paul Anka and Uplands Drive when the bus made a sudden right turn and pulled it underneath.

From her bed at the Ottawa Civic Hospital, Giama spoke on the phone to CTV News, reminding herself of what led to the accident, saying the bus driver did not see her as she crossed the street.

"He, for some reason, did not wait and did not see me crossing the street, then turned and ran over." Said Giama, the bus driver said: "I did not see you, no See you soon!"

A woman is lucky to be alive after she and witnesses say@OCTranspoLivebus hit last night; holding the foot underneath@ctvottawaDetails pic.twitter.com/3xUB9YFl4h

The Ottawa Police confirm that they are investigating and in a statement, the OC Transpo said:

"We can confirm that an incident involving contact between a pedestrian and a bus occurred last night. An investigation is under way. For more information, contact the Ottawa Police Services. "According to the Director of Traffic Operations, Troy Charter.

Leila's sister, Yasmin Giama, rushed to the scene moments after it happened; steps from your home.

"I heard from a friend that someone was hit by a bus … and I was like" whoa right in front of our building, this is crazy "and then I got a call and it was my sister," said Yasmin Giama.

Leila and her family say they are shocked that they have not heard from OC Transpo; waiting for the driver to be held accountable.

"The driver of your bus ran over a person on the bus … And you have not even contacted me to see if I'm okay," Giama said.

Bus riders in the area say they were not surprised to learn of the accident.

"Some of us are getting off the bus and the bus wants to turn the corner, even though we are starting to cross, so we have to take a step back," said Caroline Taylor.

Giama knows she is lucky not to have been seriously injured. "I could be paralyzed or worse, I might be dead."