Panarin jumps to the top of TSN's commercial bait frame 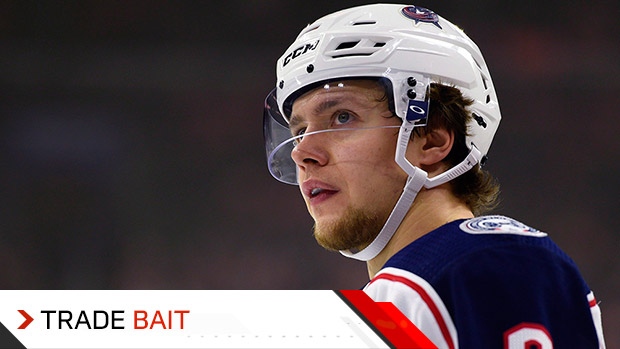 Jarmo Kekalainen's phone has been lit as a Christmas tree since Monday.

The rest of NHL general managers are calling their cohort in Columbus since Monday's statement from Artemi Panarin agent Dan Milstein, who apparently secured his client's fate with the Blue Jackets.

"It's disappointing," Kekalainen told reporters on Tuesday. "But all we can do is give the best of us."

The consensus now is that Panarin is more likely to be traded than not.

That makes Panarin the new No. 1 on the TSN Commercial Bait Board, beating Matt Duchene and his uncertain future in Ottawa, coming in second.

Rarely does a talent like the Bread Man become available at any time on the hockey calendar. Panarin, 27, is one of the few wings to run the game every night. He is on pace for a career-best 33 goals and 96 points, he has been remarkably consistent in four NHL seasons, and he is at the absolute pinnacle of his career.

Unlike the unrestricted free hanging companion, Sergei Bobrovsky, Panarin has no protection without trade and can be transferred to any team.

Panarin is the TradeCentre's golden chip that both playoff teams and rebuilding teams covet.

But Kekalainen is facing the final manager's riddle before the deadline of February 25. He must weigh the value of Panarin's return, losing him for nothing in the summer, while trying to keep the best player in the only NHL franchise he has ever won a series of playoffs.

What Kekalainen might get from Panarin might depend on Panarin's willingness or willingness to negotiate a long-term extension with a potential suitor – and whether Kekalainen would even give him that possibility.

Kekalainen specifically mentioned below-expected returns offered by UFAs outstanding Jack Johnson and Matt Calvert last year, which is why the Blue Jackets ended up keeping them to run.

The bet is that Kekalainen will not have the same flexibility this time around.

"We have already said that we will make difficult decisions if necessary," Kekalainen told reporters. "But our focus is on improving our team, making it as competitive as possible, for this spring, but also for the future, obviously. If we have to make a difficult decision, we will. We like Artemi and would love to keep it. It's your right to go to the free agency, and if he chooses to do so, we'll be knocking on your door on July 1.

Here is TSN Hockey's latest commercial bait tray, which always seeks to blend the prominence of the player with the probability of being traded: