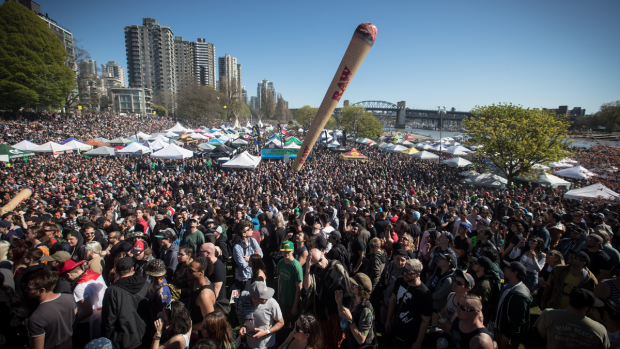 The first 4/20 event since marijuana recreation has been legalized across Canada has brought tens of thousands of people to Vancouver's Sunset Beach Park for the annual smoke-in.

The sunny climate and presentation of Cypress Hill, the largest event to head the decades-long event, helped draw the huge crowd to the beach. As usual, the police were holding hands, mindful of the use of cannabis by minors.

Although the 300 sellers who settled in 4/20 were forced to sign a contract promising not to sell to minors, some teenagers managed to score the pot anyway.

A 16-year-old boy told CTV News he was able to buy marijuana at the event, but it was also delivered for free.

Some participants also consumed excess cannabis and had to be treated on the spot by paramedics. It's not clear how many people ended up at St. Paul's Hospital in connection with 4/20, but in previous years dozens of people were hospitalized with symptoms such as nausea and vomiting.

Although it occurred six months after legalization, the event is still billed as a protest. Organizers argue that marijuana users are still stigmatized and claim that people who have spent their lives advocating legalization have been excluded from the legal retail market.

"There are stiffer penalties, more money being spent on bans, less medical access, dispensaries are closing in. Everything that was illegal before is still illegal," said Jodie Emery.

Another organizer, Dana Larsen, said the inclusion of Cypress Hill, who came to Vancouver after a ceremony to unveil her star on the Hollywood Walk of Fame, also does not diminish the status of the event as a protest.

"Music and protest have been going on since the start of the protests," Larsen said.

Sellers paid between $ 500 and $ 1,000 per square foot, and sold all sorts of marijuana and marijuana-related products, including pre-rolled junctions, flowers and edibles, which are still illegal and unregulated by the government.

Organizers told CTV News that money raised through sponsorship and booth rental will be used to cover their costs and also to pay the City of Vancouver for some of the taxpayer's costs associated with the event, but again they say they will not cover costs of policing. which they characterize as excessive and unnecessary.