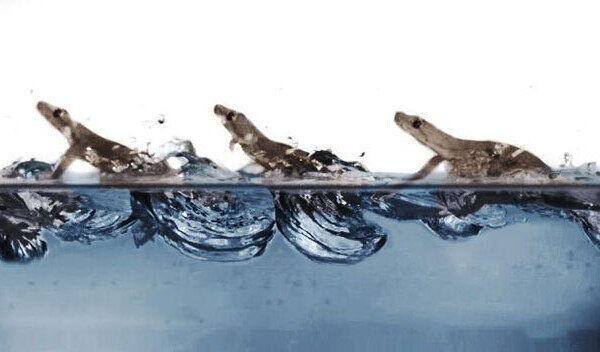 Lizards bathe with tiny drops, use the tails as optional legs and can change the grip of the feet as needed. They come in bright colors and make charismatic pets. And now we know that they can run in the water, Internal Science reports.

Ardian Jusufi, a biophysicist at the Max Planck Institute for Intelligent Systems in Germany, observed flat-headed geckos in a Singaporean rainforest when he noticed his ability to escape predators by running over puddles. Not through them, he noted, but "on the surface of the water," as Jusufi and his coauthors write in a Current biology study published yesterday. It was an impressive sight, but it was not until they performed laboratory experiments that the true extent of the lizards' aquatic prowess was revealed.

The researchers found that lizards could run at a speed of almost one meter per second. This is faster than ducks, minks, musk rats, marine iguanas and juvenile alligators can swim, write the researchers. Predators, in other words, can eat their chords.

But how do lizards do this? They are not the only species that can walk on water – the basilisk lizard is famous for it, the insects also called water striders – but the lizards do not do it the same way. They are not heavy enough to create enough strength just by tapping in water like the larger lizards, and they are too heavy to sit on the surface tension of water like an insect.

Experiments have shown that geckos combine four different techniques. First, they actually use surface tension. When the team added the surfactant to the water, the speed of the gecko was halved. Second, lizards also hit the water with all four legs, which creates air cavities like basilisks. Thirdly, they benefit from their water repellent skin. And finally, the geckos undulate their bodies – even their trunks and submerged tails – to propel themselves forward, a bit like a butterfly stroke.

There is more at stake in these findings than the ability of geckos to escape from predators. Co-author Robert J. Full of the University of California at Berkeley Internal Science that lizards can provide a model for robots that could "run and climb and run through the water" to conduct rescue missions.