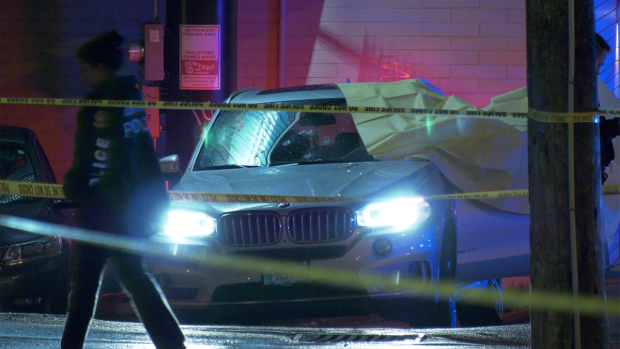 Police in Vancouver identified the man killed in a shootout in Kitsilano on Tuesday night as Manoj Kumar.

The 30-year-old man was found suffering from gunshot wounds in the Burrard Street and West 4th Avenue area after witnesses reported hearing gunshots at around 8:30 p.m.

Police said Kumar died at the scene and the suspect fled before police arrived. No arrests were made.

"Based on the circumstances surrounding the shooting, this appears to have been directed homicide," Const. Jason Doucette said in an update on Wednesday afternoon.

"Although it is too early in the investigation and we are still working to identify a motive, I can confirm that Mr. Kumar was not known by the police and has no obvious connection to a criminal lifestyle."

After the incident, several bullet holes can be seen on the broken windshield of a BMW X series SUV parked in an alley near Burrard between West 4th and West 5th avenues. A yellow tarp was put up to cover the driver's side of the BMW as investigators gathered evidence overnight.

It looks like the SUV had been parked in the alley under a billboard, next to a restaurant when it was sprayed with bullets.

Sheldon Turner, who lives a few blocks away, heard shots being fired.

"I heard seven shots from my apartment," he told CTV. "I came here, I really saw a dead body."

Turner says that the man's body was inside the SUV, lying on the steering wheel.

The shooting happened in a busy area full of restaurants and within walking distance of a movie theater.

Police were called to a fire in a vehicle on West 22nd Avenue on Yew Street shortly before midnight. The vehicle was seized and officers are investigating but failed to link him to the shooting, Doucette said.

A section of Burrard Street, near West 4th Avenue, was closed at night but was reopened to traffic Wednesday morning.

The BC Coroners Service and Vancouver police arrived on Wednesday morning to remove the body.

Kumar's death marks the fourth homicide of the city in the year.

Police are asking anyone who might have cam footage from the area around the time of the fatal shoot to contact the investigators at 604-717-2500 or Crime Stoppers anonymously at 1-800-222-8477.