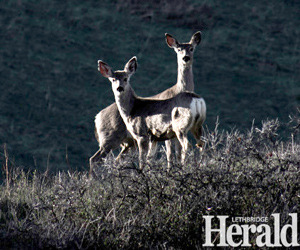 Two deer roam the coulees before sunset to find some shelter at Alexander Wilderness Park on Wednesday night. Photo of Herald by Greg Bobinec
@GBobinecHerald

Tim Kalinowski
Lethbridge Herald
[email protected]
The indignation continues to grow over a video that shows an Lethbridge Police Service officer sacrificing a wounded deer repeatedly by driving him with his police vehicle.
Edmonton resident Tara Daubert, a housewife's mother with no formal ties to animal rights organizations, watched the video late Tuesday afternoon and felt compelled to start an online petition at Change .org requesting that the officer involved be dismissed. By late Wednesday afternoon, the petition had already received more than 23,000 signatures.
"I saw the video on the news and it caused outrage in my heart," Daubert told The Herald. "Animals have no voice, so they usually rely on us to be their voice. I knew something needed to be done.
Daubert called the official LPS's actions "an inhuman and degrading act of cruelty."
"I'm hoping ASIRT as they are investigating take into account this petition," she said. "I'm waiting for a result that gets this officer off work. If he is willing to do this with an animal, he actually puts on his (her) question to be a police officer. What he did was unnecessarily cruel, and that's not a quality I want in a cop. A police officer is here to protect the community and also to be a role model. "
Daubert was echoed in these comments by many in social media and by at least one national animal rights organization.
"Animal cruelty is a very serious criminal offense, and there is little doubt that this poor deer suffered immensely while the officer repeatedly hit her with a heavy truck," said attorney Camille Labchuk, executive director of Animal Justice. local media Wednesday. "ASIRT should investigate this disruptive incident in order to determine whether allegations of cruelty against criminal animals should be established. The cops are not above the law. On the contrary, they vowed to uphold the law. For this reason, the abuse of such animals by a police officer is particularly disturbing and must be taken very seriously. "
Barb Grodzicky, a manager at Lethbridge and the District Humane Society, said wild animal cruelty cases were beyond her organization's jurisdiction to investigate, but she admitted she had been shaken after seeing the pictures.
"We have seen many different things with cruelty to animals," she said. "This story is hard to read, and the video is very disturbing to watch."
Local officials at Alberta Fish and Wildlife, when asked by The Herald about the best procedures for humane euthanasia of wildlife that were run over on roads with vehicles, said they were told not to publicly comment on matters related to this case, and wait for the result of ASIRT research.
An ASIRT press release released late Wednesday confirmed the Alberta Fish and Game's Wildlife Attorney unit and Alberta SPCA would join ASIRT to examine the officer's actions and asked the public to let the investigation take its course.
"This issue has received considerable public attention and interest," ASIRT said in a statement. "The video is disturbing, prompting many to submit complaints to various agencies including ASIRT, FWE, SPCA Alberta, Lethbridge and District Humane Society and of course LPS. We are fortunate to be part of the Canadian community, where people care about the treatment of others, including animals. This passion, however, should not supplant reason. The situation increased to report death threats against the unidentified officer. These actions are now under investigation by the LPS. "
The Lethbridge Police Service has also called for calm while the investigation continues.
"We understand that this situation is extremely disturbing to the community and those who saw the video were deeply affected," the LPS said in a statement released late Wednesday. "The LPS takes this matter very seriously and can assure the public that the incident is under full investigation by the Alberta Serious Incident Response Team with the help of Alberta Fish and Wildlife and Alberta SPCA."
The Alberta SPCA said it was designating an Okotoks investigator to help ASIRT investigate the incident involving the officer.
"An Alberta SPCA peace officer from our Okotoks office has been assigned and will be given full access to the investigation and will be in a position to make suggestions (for ASIRT)," the statement said. "Given our involvement in the investigation, Alberta SPCA is not in a position to offer any public comment on the case."
The Herald also reached out to the woman who captured the video for this story, but did not receive it before time for the press.
Late on Wednesday afternoon, Animal Ethics Canada announced on Facebook that it would be sponsoring a protest Sunday related to this incident outside LPS headquarters from 2:00 p.m.
Follow @TimKalHerald on Twitter