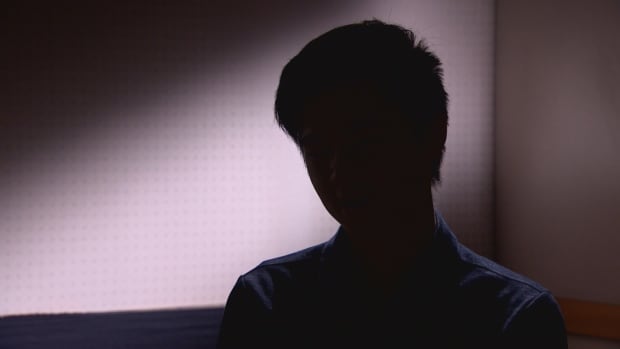 University of Alberta corridors are decorated with placards with comforting slogans like "Love yourself" and "Take a break and find balance".

A student at U of A says that when he walks by the slogans, he feels like it's all to show.

In the fall of 2016, the 18-year-old tried to take his own life. After his second discharge from the hospital in less than a month, a university administrator came to meet him.

But instead of offering help, the clerk handed him a notice of eviction from his residence.

"I could not believe it," said the student, who told his story to Radio-Canada. CBC News is calling on Eric to protect his identity.

"I was being evicted for trying to commit suicide. I did not put anyone else in danger."

Eric was informed that he had to leave his residence on campus because he had violated his residence contract. The agreement states that "the resident will not endanger people or damage properties in the premises and residence". 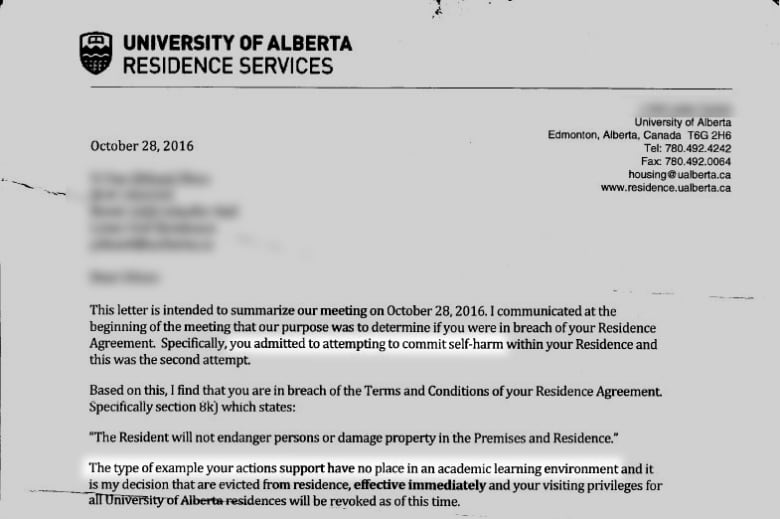 The trustee gave the student an invasion notice and an eviction letter stating, "You admitted to trying to get injured in your residence, and that was the second attempt."

The letter also said, "The kind of example your actions support has no place in an academic learning environment."

Eric said he had experienced symptoms of depression since adolescence, but at university his symptoms worsened. "Things suddenly seemed nonsense," he said.

He first attempted suicide in his sophomore year. The police intervened and took him to the hospital. After he was discharged, U of A gave him a list of phone numbers he had promised to call if he needed help.

I never gave [another] thought to contact these people, "he said.He said the help he was offered was based on an assumption that his actions were a plea for help, not a serious suicide attempt.

A week later, he still had constant thoughts of dying, he said. He tried again to take his own life.

Once again, the police took him to the hospital. When he returned to his dormitory, the officials booked him a hotel room for the night and said they would meet him the next morning, he said. That's when the university took action.

U of A officials did not explain how the decision could have been approved.

Rector of students André Costopoulos said there is no policy that includes "consider self-aggression or active self-injury" as a reason to ban a student from a residence on campus.

Costopoulos declined to comment on the details of Eric's case, but said it was possible that the ruling was based on misinformation.

Two weeks after Eric's eviction, the same administrator who delivered the letter sent him an email about reconsidering the previous decision.

But Eric said the damage was done.

"I felt like I needed a safe place to stay where I could try to settle it in my head, where I can feel comfortable," he said. "They took it from me."

U of A Students & # 39; Union said that the eviction is unacceptable.

Andre Bourgeois, a vice president of student life, said a letter like the one Eric received is "never justifiable, never acceptable."

Bourgeois said the student union is aware of more than one case when a student was evicted in similar circumstances.

He said he is concerned that a recent Alberta Advanced Education Directive for the province to provide clinical care services for students will make it more difficult for school personnel to make decisions in the best interests of students with mental health problems.

"I would not say that I am confident that the university will never make another mistake when it comes to suicide or mental health," Bourgeois said.

Mara Grunau, executive director of the Calgary Center for Suicide Prevention, said that suicidal thoughts are almost always the result of multiple factors, but students may be particularly vulnerable to certain stresses.

"What we normally see with students is the pressure they feel to achieve," Grunau said.

"It may also be the pressure of living away from home for the first time."

The symptoms of mental illness also turn out in late adolescence, she said.

Since 2017, five students at the University of Alberta have died of suicide.

Still a student, Eric sought psychiatric help and continues to struggle with depression.