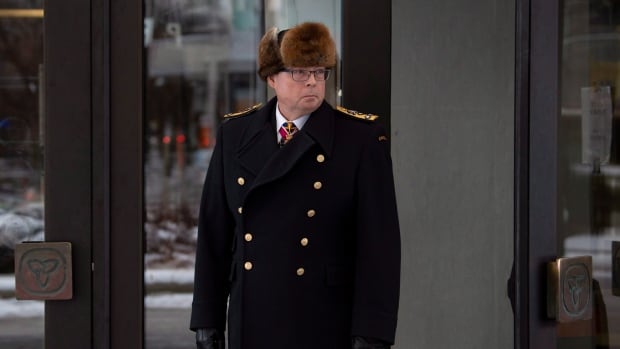 A junior procurement authority named in the criminal case against the former military prime minister was suspended from his position in the federal government, according to a House of Commons committee.

Matthew Matchett was identified in court documents filed by lawyers who defended Vice Admiral Mark Norman, who was charged with a single charge of breach of trust.

The revelation is the latest turnaround in the high-level pursuit of Norman, the former deputy chief of defense team, who is accused by the RCMP of leaking cabinet secrets.

Les Linklater, assistant deputy minister of the Department of Public Utilities and Procurement Canada, told Commons on Thursday that he was suspended from his job in the federal government.

He said he was unable to state when it happened and refused to discuss the circumstances of Matchett's suspension, including the reasons for it.

"I do not have the freedom to get into personnel management issues," Linklater said when questioned by Conservative MEP Kelly McCauley.

Les Linklater, a senior government official, announced the suspension of Mathew Matchett during a Commons committee on Thursday 0:54

Matchett was not charged with any offense.

The Mounties acknowledged earlier in their investigation at Norman that they were investigating more than a breach of secrecy linked to a Cabinet Committee meeting on shipbuilding at the start of the liberal government's term.

In asking the court last month to force the federal government to release documents, Norman's lawyer Marie Henein said the federal police force had identified another source for the leak.

"The RCMP investigation found that a government official, Matthew Matchett, gave a lobbyist to Davie, classifying the Cabinet Memorandum (" MC ") and sliding over the iAOR government committee meeting on November 19, 2015, wrote Henein. in a filing in October.

The Mounties declined to comment when asked about Matchett in October, saying the investigation into breaches of cabinet secrecy was under way.

In a subsequent court case, Henein claimed that the police had not yet interviewed Matchett.

E-mail exchanges released by the court this month suggest that Matchett has leaked a memo to the cabinet and a slideshow to an Ottawa lobbyist, Brian Mersereau, in the days leading up to the cabinet meeting in question.

At that meeting, the newly elected Liberal Government decided to put in a $ 668 million program to lease a supply ship to the Navy on hold. News of the decision immediately leaked to the media and the cabinet eventually reversed the course and allowed the Davie Shipyard project in Levis, Virginia, to continue.

Cabinet ministers were furious, however, and after an internal government investigation failed to determine the source, the RCMP was called.

A detailed reference to Matchett was contained in more than 700 pages of documents linked to Norman's case and released by the court two weeks ago.

The documents include e-mail snippets and RCMP witness statements – records that have not been tested in court and can not be entered as proof by the Crown.

In an e-mail, Matchett reportedly tells Mersereau on November 17, 2015 that he "got it all – the motherload."

Mersereau, of Hill + Knowlton Strategies, told the Mounties in an interview that a brown envelope with cabinet documents appeared the next day at his office in downtown Ottawa.

At the time, Matchett was working for the Atlantic Canada Opportunities Agency, but later moved to a position in Public Services and Procurement Canada.

CBC News has been in contact with Matchett on several occasions since its name appeared in court documents and received no response.