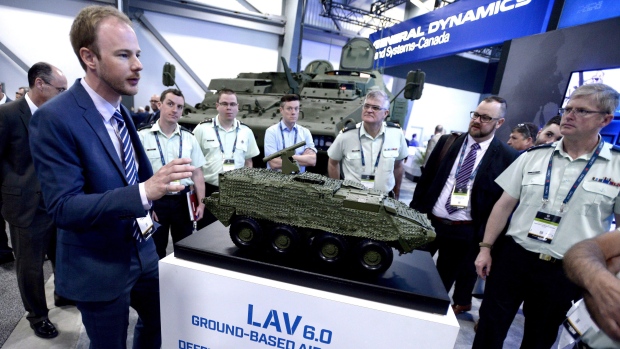 OTTAWA – The Ontario company that sells $ 15 billion of armored vehicles to Saudi Arabia is warning the Liberal government that canceling the deal will cost billions of dollars in fines.

General Dynamics Land Systems-Canada said in a statement on Monday that canceling the contract would also hurt its workforce.

The statement comes as the federal government is reviewing the controversial contract.

Canada is reviewing all arms sales to Saudi Arabia and will not issue any new export licenses until the review is complete.

The October killing of journalist Jamal Khashoggi after he entered a Saudi consulate in Turkey provoked international condemnation against Riyadh.

"We continue to execute our valid and binding contract," General Dynamics said in a statement.

"If Canada terminated the contract unilaterally, Canada would incur billions of dollars of liability for General Dynamics Land Systems-Canada.

"In addition, termination of the contract would have a significant negative impact on our highly qualified employees, our supply chain across Canada and Canada's defense industry in general."

Foreign Minister Chrystia Freeland said that Saudi Arabia's explanations for Khashoggi's death are unreliable and that there needs to be an independent investigation.

"In the past, Canada has suspended existing export licenses and this has always been something we are prepared to do again, as the situation deserves," Freeland said in an interview on Monday.

Prime Minister Justin Trudeau said the fine for canceling the contract would be "in billions of dollars."