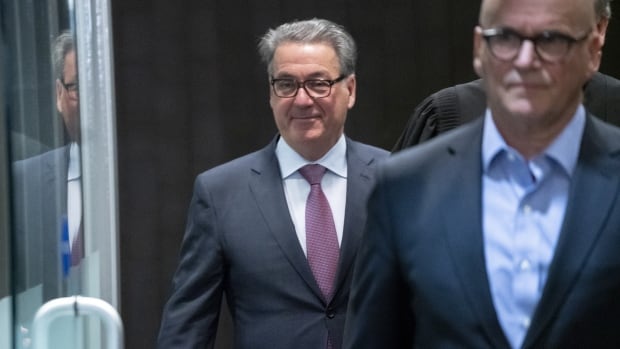 Former SNC-Lavalin CEO Pierre Duhaime pleaded guilty to a single charge of breach of trust in a Montreal court on Friday morning, six years after he was arrested in a major fraud case involving a new hospital complex.

According to the Crown, Duhaime, 64, had reason to believe that inside information was changing hands in order to defraud the bidding process for SNC-Lavalin to win the contract to build the hospital in Montreal.

This contract was worth $ 1.3 billion.

"Instead of acting according to this knowledge, and preventing that from happening, what he could have done, he chose to look the other way," said prosecutor Robert Rouleau.

The Quebec anti-corruption squad arrested Duhaime in November 2012 with 15 counts, including fraud, conspiracy and counterfeiting. Fourteen of those charges were dropped on Friday.

The Duhaime trial should begin next Monday.

Provincial court judge Dominique Joly has accepted a joint Defense and Crown recommendation that Duhaime be sentenced to 20 months of house arrest, 240 hours of community service and make a $ 200,000 donation to a fund that will compensate victims of crime.

Duhaime is the fourth person to plead guilty to charges related to the hospital contract, which a Quebec police investigator called "the largest case of corruption fraud in Canadian history."

Last November, Yanaï Elbaz, a former director of redevelopment at the McGill University Health Center (MUHC), was sentenced to 39 months in prison after pleading guilty to charges including a breach of trust and conspiracy.

Riadh Ben Aissa, a former construction vice president of SNC-Lavalin, was sentenced to 51 months in jail in July. He pleaded guilty to an indictment of using a forged document.

Pamela Porter, wife of Arthur Porter, former chief executive of MUHC who died in Panama in 2015, was arrested for money laundering in 2014.

Duhaime has not been CEO of the engineering firm since 2012 when he stepped down after an internal audit found that he signed "undue payments" to undisclosed agents.