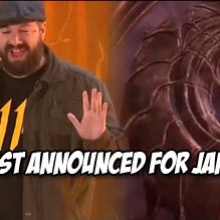 The Mortal Kombat 11 revelation event gave us a look at Baraka, Skarlet, Sub-Zero, Liu Kang, Kung Lao and Sonya Blade, as well as the previously unveiled Scorpion, Raiden and Shao Kahn. Geras was also revealed as a newcomer grappler.

We also received confirmation that Rhonda Rousey is the voice actor behind Sonya. It looks like the Mortal Kombat 11 story mode will pick up right after the events of Mortal Kombat X. A character known as "Kronika" is not very pleased with Raiden's meddling with the timeline.

If you blinked, you may have missed Kabal's taunt that made him speed up the screen when Tyler Lansdown appeared onstage. Unfortunately, Lansdown was not willing to talk about what had just happened.

It appears that no ads are complete without an ad. It was revealed that the first Kombat Kast will be held on January 30.

It is very likely that we will take a look at the new Kabal during the January 30th flow. There will also be some surprises during the event.