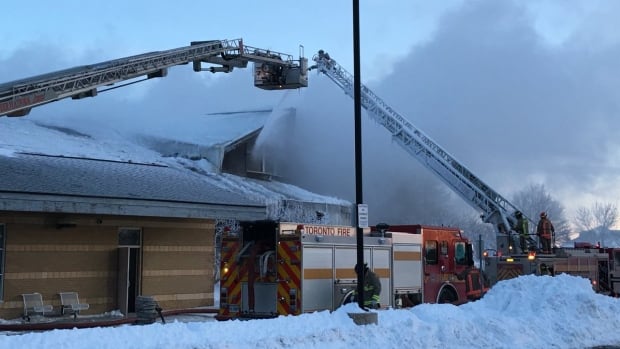 Firefighters continued to fight a "stubborn" fire inside the Agincourt Recreation Center in Scarborough on Friday, and their efforts were hampered by the building's design.

The high ceilings of the center, the wide open spaces and the pool area make combating this particular fire "very difficult," he added.

In addition to a difficult situation, crews endured cold temperatures all night. They were forced to thaw equipment on TTC buses at various points during the fight.

The fire, which is currently three alarms but has reached the status of five alarms at its peak, is still not under control, McCoy said.

Toronto Fire continues to fight a stubborn fire at the Rec Center Agincourt on ice and cold. Brutal conditions. They expect to be here at least all day. pic.twitter.com/S6V4S4YiO5

"We've been doing the same thing all night, it's a long, slow fire, it never gets ripped off, but we also can not completely extinguish it," he told CBC in Toronto.

The fire broke out shortly before 5:00 p.m. On thursday. It was reported to emergency crews that he had started in the engine room of the building, but the Toronto Fire warned that its origin was not determined.

The building was evacuated and no injuries were reported.

The firefighter perches at the tip of an ice encrusted ladder in a mist of smoke and steam. He uses a tape recorder to pull roof pieces from the Agincourt Rec Center. Below him, fire. pic.twitter.com/XR84suQQUq

The recreation center, located in the Glen Watford Drive and Rural Avenue area, includes a swimming pool and a hockey rink. McCoy said the fire did not spread to the arena and he did not expect that to happen. Chlorine from the pool area and ammonia from the runway were secured shortly after firefighters arrived at the site, said Toronto Fire Marshal Stephan Powell.

The crews are expected to be on the scene all day on Friday and possibly on Saturday as well, according to McCoy.

The Toronto City Recreation Center is one of two leisure pools in Scarborough, and is also home to a number of local sports clubs.

Meanwhile, the Toronto District School Board said students from the Alexander Mackenzie public school will be transferred to the Agincourt Collegiate Institute on Friday. Likewise, the Catholic council of Toronto says that "very carefully" about the slight smell of smoke in St. Bartholomew, staff and students will be transferred to St. Ignatius of Loyola for one day. 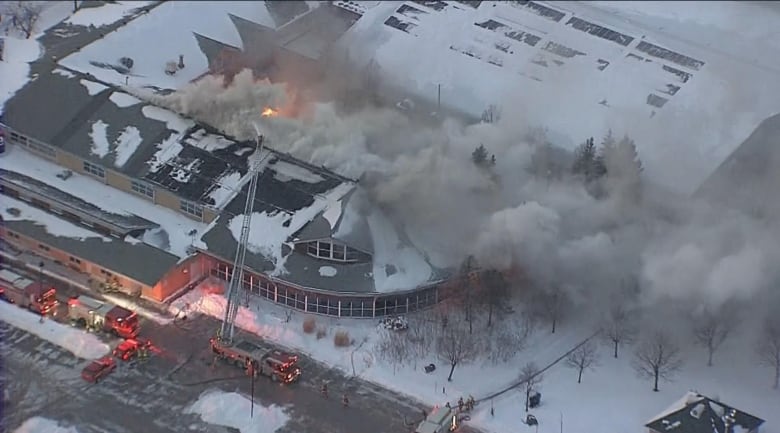 At the peak of the fire, 30 fire trucks and their crews were involved in the effort to contain the fire. (CBC)