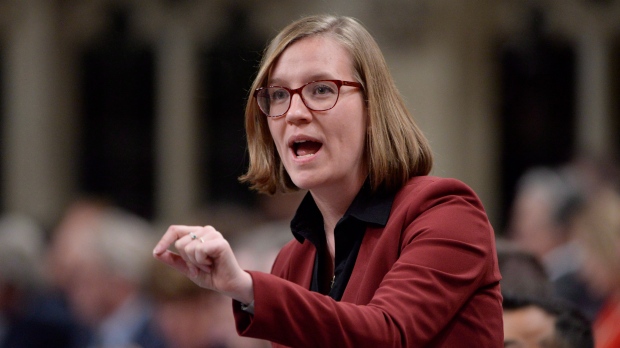 OTTAWA – The federal government is unveiling a "comprehensive series" of new measures to strengthen the Canadian electoral system against foreign interference and increase Canada's readiness to defend the democratic process against cyber threats and misinformation.

This includes spelling out how Canadians will be told about serious attempts to interfere during the campaign. In order to reach the threshold for the group of five senior bureaucrats to go public on these attempts, they should be considered "disruptive" and seen as having an impact on Canada's ability to conduct free and fair elections.

Minister of Democratic Institutions Karina Gould, Minister of Public Security Ralph Goodale, and Defense Minister Harjit Sajjan are unveiling next steps with the next federal election only nine months away.

A senior official speaking with reporters on background prior to the announcement of ministers said the "comprehensive series" of new measures is the result of an "unprecedented" collaboration between Canada's national and cyber security agencies, intelligence agencies and federal departments, including Global Affairs Canada.

The "rapid response mechanism" was a new initiative that Canada signed at the G7 meeting in Charlevoix. It was part of a multifaceted commitment to democracy against foreign threats. It will include monitoring of foreign social media activity to analyze trends and identify where Canada may be vulnerable.

These measures are in addition to ongoing efforts to secure Canada's electoral system, such as: enacting Law C-76 prohibiting foreign spending; working with Elections Canada to prevent the voting infrastructure from being invaded; and collaborating with social media companies on plans to counter false news and misinformation by interfering with public opinion during the campaign.

Bill C-76 also gave new powers to the Canadian Election Commissioner to conduct investigations into electoral interference, and forces social media platforms to create databases of their advertisements during the campaign.

The Communications Security Establishment will also release an update of its report on cyber threats to Canada's democratic process – including threats to political parties, politicians and the media – in the coming months.