Delta plane did not take off for the second time 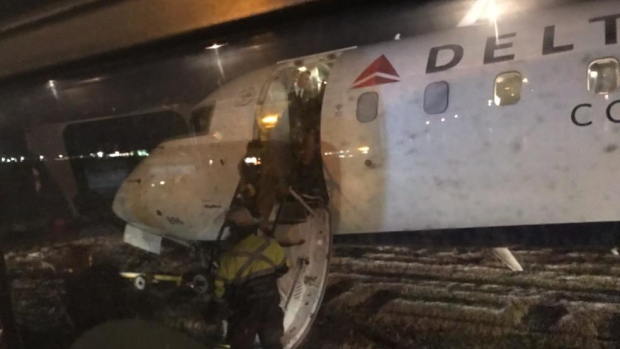 Some Delta passengers are still trapped in Saskatoon after the plane did not take off for the second time.

By 6:15 am on Friday, a delta flight bound for Minneapolis was scheduled to take off, but slid off the runway due to freezing rain. All 74 passengers and four crew members were safely returned to the terminal. The flight was delayed until five in the afternoon. Friday night, but that flight did not take off either.

Mark Irvin, of Des Moines, Iowa, has been a passenger on both flights and says he has been at the airport for more than 14 hours since Friday. He has a connection in Minneapolis before flying home.

"It's very surreal the disaster that this trip is trying to take home," Irvin said. "I should have been home for 24 hours."

He says he waited two hours in line on Friday to be rescheduled on a flight to Saturday. Although there is no official word on what caused the second failed attempt to take off, Irvin was aboard the plane.

"The rider accelerated and we started down the track. And just as the nose rose from the ground, you could hear an alarm going off and a few seconds later there was a crash, like a burned tire or something, "Irvin said. "Then, immediately, hold the impulse and brake hard and make us stop."

After another delay on Saturday, the flight is scheduled to depart at 12:30 p.m. Irvin says that Delta made up for it with 10,000 frequent flyer points for delays.

"I'm ready to get home and see my kids," Irvin said.