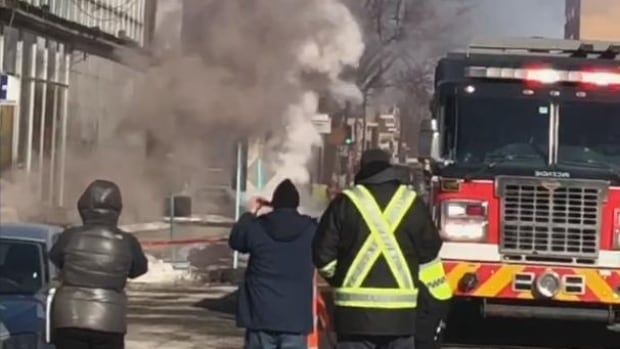 Hydro-Québec says that a power outage affecting Montreal is linked to an underground explosion and a cul-de-sac in Rosemont – La Petite-Patrie.

The fire began in underground pipelines belonging to Hydro-Québec on Belanger Street between Boyer and Saint-André streets, according to Montreal firefighters, who arrived at the scene at 12:18 p.m.

Electricity had to be cut off so firefighters could get into the manhole where the equipment was located.

The Metro Blue line was affected most of the afternoon, but the STM announced that the line was back and running shortly after 4:30 p.m.

More images of the fire at La Petite-Patrie, which shut down the blue line and cut off the power supply for thousands of people. Since then, Bélanger Street has been reopened to traffic. pic.twitter.com/rewQuHBWdI

Bélanger Street was blocked off to traffic most of the afternoon, but now it has been reopened.

"We are using different ways to reduce the number of customers affected. Once the fire is resolved, we can provide everyone who is affected at this time," he said.

Abergel said as soon as the smoke disappears, Hydro-Québec workers will take a look at the equipment to see what has failed.

Thousands of people are out of power after an underground explosion in Montreal's Rosemont – La Petite Patrie neighborhood this afternoon. More to come https://t.co/CMm4n4mlji pic.twitter.com/7KezqiRGGc