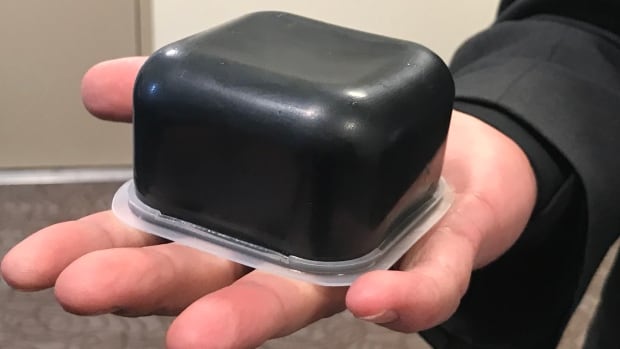 As a disc made of oil and bitumen was thrown into the air, railroad executive James Auld quipped, "We almost had an oil spill there."

Auld and other officials were optimistic about making their first public presentation on pucks – a solid coal-like product that could float on water.

CN Rail and a First Nation of Alberta want to start building a new facility to produce bitumen discs this year and begin shipping the product to the whole world before the end of 2020.

They made the announcement after their presentation at the Indigenous Resource Council conference in Calgary on Thursday.

Bitumen pucks are the common term for CanaPux, which were developed by the railway company and Wapahki Energy, a business owned by Heart Lake First Nation. The community is located about 300 miles northeast of Edmonton.

The discs resemble a single-dose yogurt container and are the size of a bar of soap. Bitumen is converted into a solid product and sealed in plastic. The pucks are designed to be transported in regular container wagons by train and loaded onto cargo ships at underutilized coal terminals on the west coast.

Could boost profit by $ 15 a barrel

If the technology succeeds, the oil industry will be able to sell bitumen near world oil prices without the use of pipelines or oil tankers. Oil producers could earn an additional $ 15 per barrel of oil on average using CanaPux because of its ability to reach foreign markets and the cost savings of not having to use thinner, a fluid needed to move bitumen into oil pipelines. according to Alfred Fisher and Sproule. an energy consultant involved in the project.

Project proponents are currently working with the oil industry and regulators before building their pilot facility, which would process up to 10,000 barrels of bitumen and about 275 tonnes of plastic per day.

"We're designing this size because it makes commercial sense and it's economical," said Fisher. "At the same time, we still have to learn, we build this enough so that we can learn, if we have a problem, it's no big deal."

Part of the reason we want it to float is that it would be easy to clean.– Jeff Paquin, CEO of Wapahki Energy

The pilot facility will cost $ 50 million to build. CN Rail and Wapahki each contribute $ 16.7 million and the remaining resources are expected to come from the government or from a private investor.

The pucks would be produced using recycled plastics made from low density materials, such as plastic bags.

"Part of the reason we want it to float is that it would be easy to clean," said Jeff Paquin, chief executive of Wapahki Energy.

The discs would be processed in foreign refineries, heating the product to 130 ° C to separate bitumen and plastic.

The First Nation Heart Lake is located near several oilands facilities. CanaPux has been in development since the beginning of 2016.