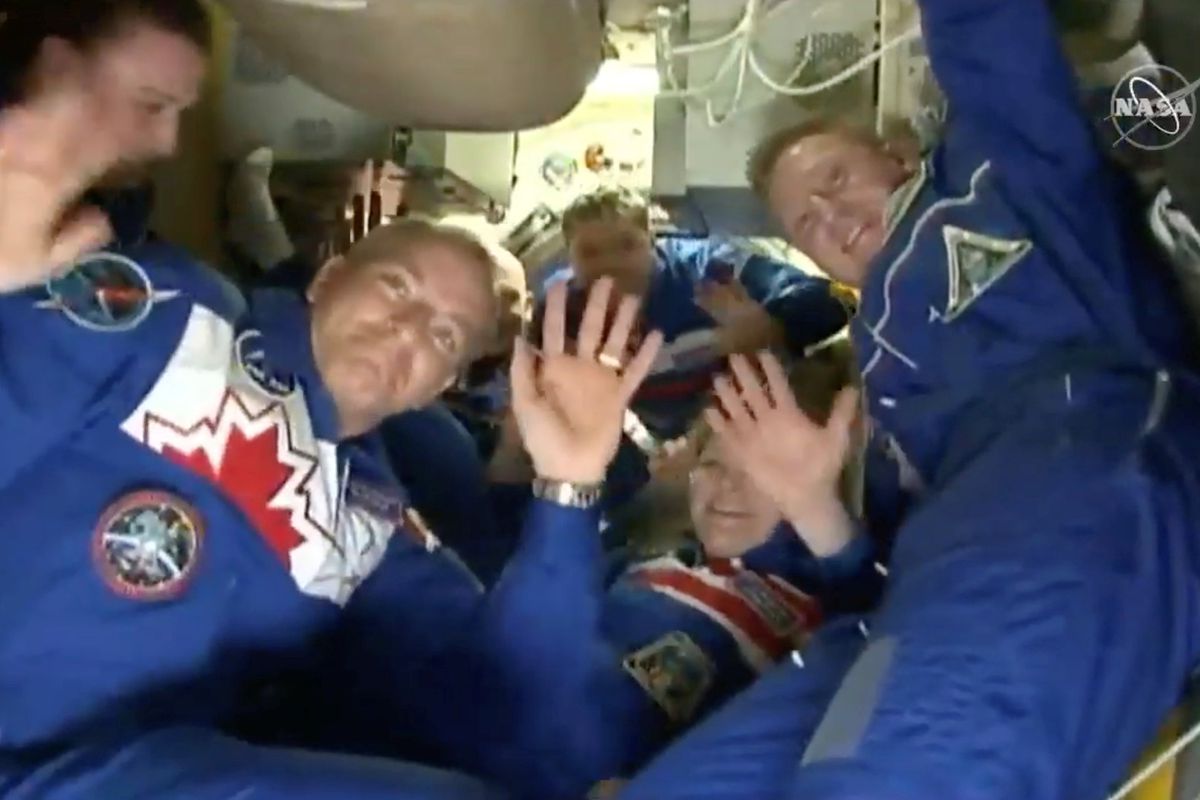 During his first days in space microgravity, David Saint-Jacques was transported back to his childhood, the Canadian astronaut told reporters on Monday.

It was not the sensation of looking up at the sky in wonder at what he was talking about, but the feeling of being turned upside down on a playground as blood rushed to his head.

"I'm a little congested here, like most people, because gravity is not there to pull the blood to the legs," explained Saint-Jacques Monday through a video link between the International Space Station and Agency headquarters Canadian Space.

"Your body has to adapt to that, so initially you have a kind of big swollen face … Do you remember like a child hanging from the monkey bars in the park, how does your head get a little swollen? It's how you constantly feel at the beginning and then normalize. "

The astronaut, who arrived at the International Space Station on Dec. 3, said there had been many breathtaking moments. The first sunrise into orbit after he and fellow astronauts Anne McClain of NASA and Oleg Kononenko of the Russian space agency Roscosmos took off was "a very emotional time," he said.

"I looked out the window and this little blue crescent started to get brighter and brighter and I realized," Wow, this is really the curve of the land, "he said. "So, this first sunrise in orbit, I will never forget. It was very touching – just so cute. "

At his first space station press conference, he said he was trying to learn as much as possible from the occupants who have been there since June and are scheduled to return to Earth on December 20. They are Serena Aunon-Chancellor of NASA, Alexander Gerst of the European Space Agency and Sergey Prokopyev of Roscosmos.

He said he started "getting involved" in Earth photography, including photos of his hometown. Saint-Jacques was born in Quebec City and grew up in the suburb of St-Lambert in Montreal.

"It's just an incessant sense of reverence looking at our blue planet – that thin blue line in the atmosphere, that color, that flash of blue – is simply unbelievable," he said, adding that he is moved by the beauty of the sun and feel the size of the Earth.

"It's very touching, and it's very humiliating, and it makes you want to go back to Earth and help improve."

Saint-Jacques did not say anything in the intensive training that astronauts face can prepare them for the feeling of weightlessness.

"So I make the typical mistakes of the newbies, I try not to hit anywhere and my colleagues are showing us how to fly," he said. "The other thing we notice about our bodies, of course, is that you lose a sense of direction and initially it's easy to get lost, but we get used to it."

Saint-Jacques was playful during his exchange with reporters, turning his microphone in the air and at one point dropping it and continuing to talk as it floated in place. When the session was over, he said goodbye and disappeared from the picture.

On board the station, the 48-year-old doctor will conduct a series of scientific experiments, with some focusing on the physical effects of astronaut experience in microgravity in orbit and others on how to provide remote medical care.

The last Canadian astronaut to visit the space station was Chris Hadfield, who was on a five-month mission that ended in May 2013.