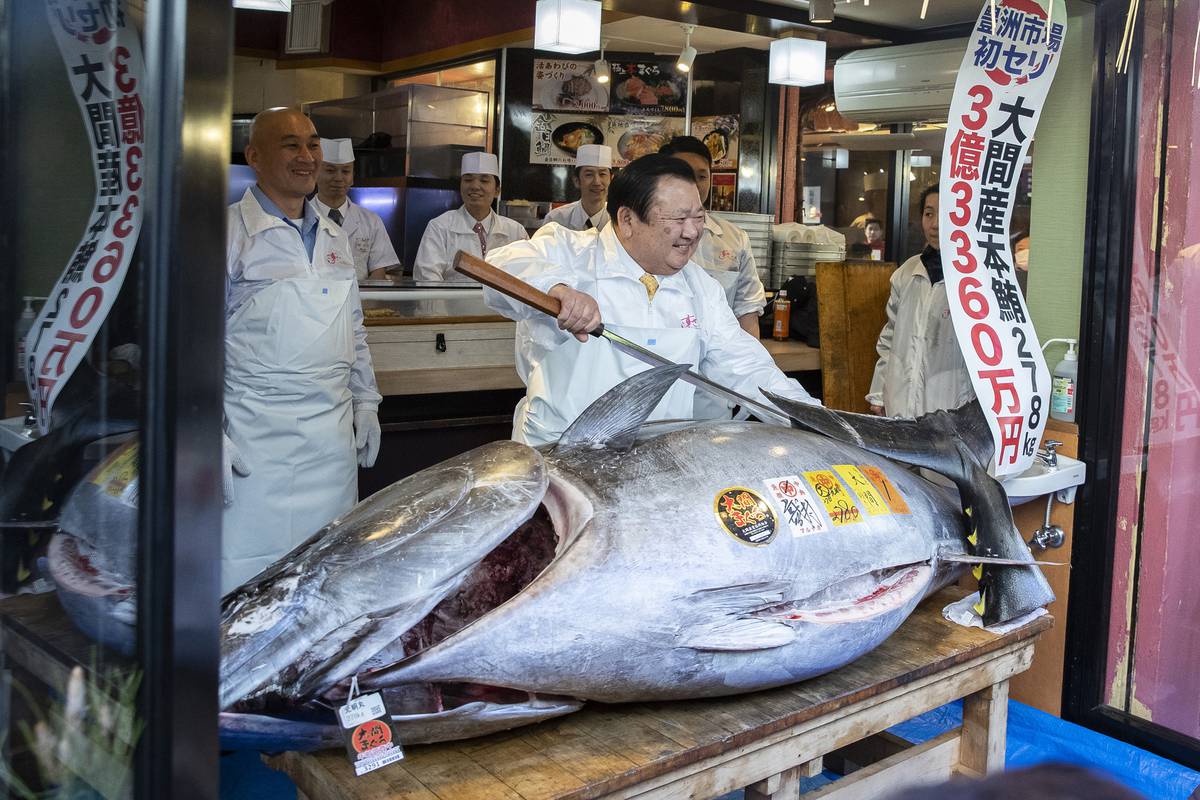 A bluefin tuna sold for a record $ 3.1 million in the first auction of the year at the new Tokyo fish market on Saturday, but behind the celebrations lies a troubling story of overfishing and shrinking stocks.

Kiyoshi Kimura, owner of the Sushi Zanmai restaurant chain, paid 333.6 million yen for the 278 kg of the first auction of the year, and the first to be held at Toyosu's new fish market in Tokyo after the famous market of Tsukiji.

The pre-dawn auction price was almost 10 times higher than the price paid at last year's auction – albeit for a considerably smaller fish – and almost double the previous record, also set by Kimura in 2013. There was an intense war of bids with an auction. buyer who had won last year.

The winner said he was "very satisfied with the quality" of the fish, but admitted that he paid a lot more than he expected.

"The tuna looks so tasty and fresh, but I think I paid too much," Kimura told reporters outside the market later, according to news agencies.

Kimura said a single piece of tuna would be served to customers in their restaurants later that day.

The fish was caught off the coast of Aomori province in northern Japan by fishermen from the small town of Oma, which has a national reputation for the quality of its tuna catches.

Bluefin tuna is highly valued for its taste in sushi restaurants, but decades of overfishing has made stocks plummet.

The IUCN Red List of Threatened Species classifies Pacific bluefin tuna, or Thunnus orientalis, as "vulnerable" with a declining population.

"The celebration around the annual Pacific bluefin tuna auction hides how deeply this species is in trouble," said Jamie Gibbon, associate manager for global tuna conservation at The Pew Charitable Trusts. "Its population has fallen to less than 3.5% of its historical size and overfishing continues to this day."

In response to growing fish shortages, Japan and other governments agreed in 2017 on quotas and strict restrictions on fishing in an attempt to rebuild stocks of 20 percent of historical levels by 2034.

This caused considerable misery and some difficulties in Oma.

Oma tuna is known as the "black diamond" of tuna, because fishermen still use traditional methods of manual fishing instead of trawling, allowing them to catch the fish intact.

But to keep quota, fishermen said they decided to go slow in the summer and focus on fishing in the fall and winter, when tuna has a higher price. However, when they ventured out, they found that tuna is harder to find than normal and picks up low, leading to fears in November that the Oma tuna could eventually disappear from the country's sushi bars – although the December catch was better.

Hundreds of Japanese fishermen also protested against new quotas outside the Ministry of Agriculture, Fisheries and Food in June, while Oma also canceled its annual tuna festival in October in protest.

But Gibbon lamented that Japan and other countries were already pushing for higher catch quotas for 2019, only one year for the 16-year recovery plan, while noting reports of Japanese fishermen discarding and not reporting dead blue tuna to avoid exceeding their quotas.

"It is time for countries, including Japan, to support the recovery of Pacific tuna, to fund the necessary science and to commit to tightening fishing limits, to ensure that there will still be a bluefin tuna auction," he said.

Pacific bluefin tuna reaches a maximum length of almost 10 feet (3 meters) and a maximum weight of 550 kg. A deep sea predator, they were described as "twice the size of a lion and faster than a gazelle".

They are constructed as torpedoes, hydrodynamically shaped, retractable pectoral fins (lateral) and, unlike other fish, with eyes facing the body, according to the WWF.

They have two main breeding sites on the coast of Japan. Most remain in the western Pacific for life, ranging from the island of Sakhalin in Russia to the north to New Zealand in the south. But others, when they reach one to two years of age, migrate 11,000 miles to the rich waters of California and the Baja Peninsula, returning after two to four years to spawn in the same western Pacific waters, where their lives, Pew Charitable Trusts. tell.

Pew says that fishermen, mostly from Japan, South Korea and Mexico, usually fish before reaching maturity, which harms the population.

According to the Mongabay nature news site, the bluefin is difficult to be bred in captivity. With reactions that are highly sensitive to light and sound, they rarely appear in captivity and often swim at high speed and die on impact with the sides of tanks or nets.