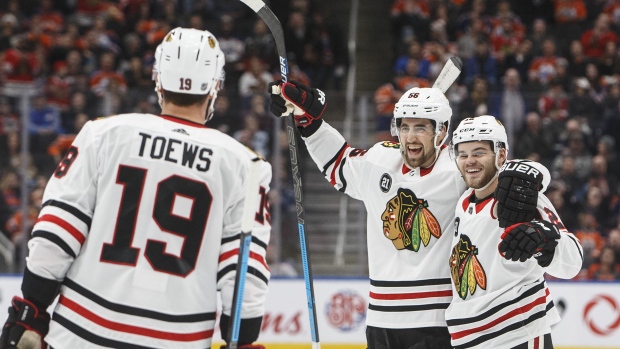 EDMONTON – Exploding by five goals in the third quarter kept the Chicago Blackhawks at a brisk pace.

Patrick Kane scored a goal and assisted Blackhawks victory over Edmonton Oilers 6-2 on Tuesday for their fifth consecutive win.

"We know what we're doing is working and we're playing," Chicago captain Jonathan Toews said. "Whether we are ahead of or down a goal in the third period, we can find ways to create offenses and come out on top. It's good for our team to win in different ways, it just boosts our confidence."

Erik Gustafsson, John Hayden, Dylan Strome, Drake Caggiula and Dominik Kahun also scored for the Blackhawks (21-24-9), who managed to return to the playoffs.

Leon Draisaitl scored both goals for Edmonton (23-25-5), which equaled the sixth consecutive defeat.

"The same kind of thing as the last two games," said Oilers captain Connor McDavid. "We control many of the first two (periods) and then sleep in the third." "I'm not sure what that is, we can talk as much as we want, we just have to find a way to pick it up."

Cam Talbot set aside 23 of 27 shots for Edmonton before giving way to Mikko Koskinen, who made six saves.

Chicago scored first before the game was two minutes into the game when Gustafsson's kick hit the side of defender Adam Larsson's leg and overtook Talbot in just four seconds.

Edmonton tied the game in a power play with three minutes of opening time when Draisaitl took a rebound to his 30th goal of the season.

The Oilers made it 2-1 with a two-game lead, just over a minute from the end, when McDavid put him on the field for Draisaitl, who scored again in one goal.

The Blackhawks drew the game in the fourth minute of the third, when a Edmonton shot led to a Hayden goal, then rose to the lead 1:33 later when a Strome shot passed the legs of Darnell Nurse and Talbot.

Kane extended the lead to 4-2 just 28 seconds later when he lifted a stick to score his 32nd out of the season. He increased his sequence of points to 12 games.

Switching Talbot out to Koskinen did not turn the tide as the Blackhawks scored again just 27 seconds after a goal by Caggiula, a former Oiler.

Edmonton allowed a fifth goal in the third period in the power play in a count by Kahun with eight remaining minutes.

"It's good to stay that way and finally change things a bit," Chicago coach Jeremy Colliton said. "We have a little strength and we are playing well, and when you have the momentum and you continue to play well, you usually get the results, we just have to keep pressing and we're going to get our points."

Both teams are back in action on Thursday when the Blackhawks return home to host the Vancouver Canucks and the Oilers head to Minnesota to play the Wild.

Notes: Oilers defender Oscar Klefbom returned to training after missing the last 21 games with a broken finger in his left hand.