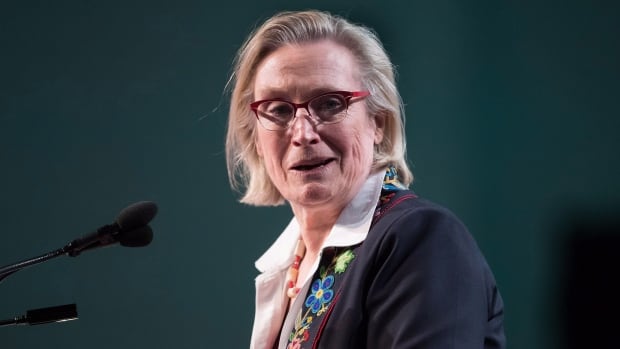 Crown Indigenous Affairs Minister Carolyn Bennett says she is proud of the NGO's work on the enormous injustices faced by First Nations, Métis and Inuit – but she is also defending her decision to restrict the timing requested by the inquiry, despite the Commissioners to continue for longer.

Since the start of the inquiry in 2016, commissioners have signaled they would need an extension to the two-year timeframe originally set by the federal government.

"Timelines and accountability" will be critical in the future, says chief commissioner Marion Buller. 5:28

The investigation was scheduled to deliver its final report last month – but only finished the last of its public material collection sessions on Friday after Bennett granted a six-month extension.

At that time, the survey heard about 1,500 family members in 15 community hearings.

However, the commissioners, led by former BC. Judge Marion Buller criticized the Liberal government's decision to limit the extension of time – accusing the government of trying to fit a report into a timeline that matches the timeline.

The final report of the inquiry is now expected in April 2019. A federal election will be held next fall.

I think we did the best we could, allowing the survey to continue until December 31 and then giving them the extra time to write the report.– Minister for Indigenous Relations – Crown Carolyn Bennett

In an interview with Aboriginal Peoples Television in October, Buller said that Ottawa's refusal to further extend the investigation was "horribly disappointing."

"I'm trying to think of words that are polite to use, but horribly disappointing not just for us, but for indigenous and non-indigenous peoples across Canada," Buller said.

"We consider this issue, or issues of violence against indigenous women and girls, to be so serious and so important to all Canadians that it should have survived an election cycle."

Buller repeated these criticisms in an interview with CBC Power and Politics Friday saying that the final report will lack a bit of "breadth and depth" that commissioners hoped to include in their final report at the outset because of the limited deadline and other restrictions imposed by the government.

Bennett said on Friday that the government's first priority has been timely delivery of a report to families who have lost their loved ones, and to those who have asked for an inquiry for many years.

She said the government accepted an agreement, allowing more time and rejecting the request for another two years.

"I think we did the best we could by allowing the survey to continue until December 31 and then giving them the extra time to write the report," Bennett said in an interview with CBC News.

"Families have been very clear, they did not want this to last forever, they wanted something in place."

Bennett also noted that this was the first truly national inquiry in which all provinces and territories issued orders-in-council granting commissioners some subpoena powers-to require the production of relevant police documents on certain crimes, for example.

An additional extension to the timeline could have resulted in some provinces and territories withdrawing their continued support for the survey, Bennett said.

Bennett said she hopes that after the inquiry ends her work, the whole country will have a better understanding of the colonial trauma inflicted on indigenous women for generations – a trauma that has often put indigenous women in dangerous situations.

She said that the disproportionate amount of violence that indigenous women have suffered is linked to the ugly history of the Indian residential school system, the "decade of the years" in the welfare system, and the current troubled state of provincial child and family services.

"People who get hurt, hurt people. It's about what happens when people are harmed as children," Bennett said.

"I think we have come to understand that all things, shelter, education and all things that have been discussed for a long time, services for children and families, racism and sexism in many of our institutions … The commission is really facing the ugly side of the division that exists in Canada, "Bennett said.

Buller said the final report will offer practical recommendations that are "actionable," with firm government timelines for implementation.

"Families and survivors will not let the government ignore our recommendations. They will keep the government's feet on fire," Buller said.

And yet, Bennett said Ottawa is not waiting for commissioners to complete their final report to implement some of the fundamental reforms it believes could help contain the violence perpetrated against indigenous women and girls.

"Even before the preliminary report, we continue with some of those things that were pointed out to us at pre-inquiry meetings," Bennett said.

First, the government is moving forward with a plan to fundamentally reform indigenous child welfare systems in this country, the minister said.

Bennett continually pointed to the sad state of child welfare in his interview with CBC News – condemning a system that often prioritizes the seizure of children who need care about preventive measures. She said that the child welfare system is really the "basis" of so many social issues.

"This is an avoidable vulnerability. The question is about implementing concrete actions to stop this terrible tragedy – and that is what we have to do," Bennett said.

The Minister of Indigenous Services, Jane Philpott, announced earlier this month that the federal government would deliver the provision of child welfare services to individual First Nations over time in an effort to reduce the large number of indigenous children in care Social.

Ottawa is working alongside indigenous partners to "co-develop" federal legislation that will begin the process of returning authority to the First Nations, Inuit and Métis peoples to care for their own children in need of social assistance.

It is a deviation from how the current system works, which often leaves most Indian children sheltered in provincially governed child welfare systems that critics say ignore their unique cultural needs.

In addition to child welfare reforms, Bennett also cited the establishment of a special unit within the RCMP to develop best practices and change the culture of policing as a significant development that comes out of the research process.