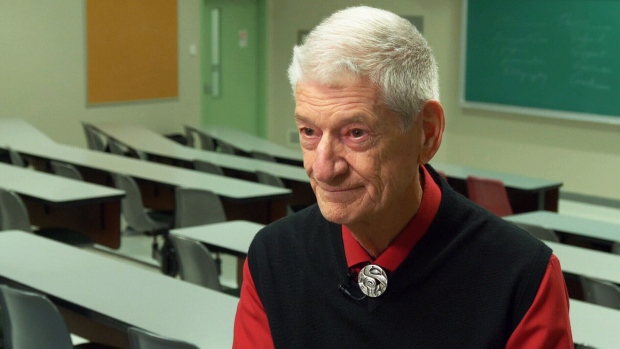 After being diagnosed with Alzheimer's, Ron Robert, 81, decided to enroll in the university as a personal experience to see if education could keep chronic neurodegenerative disease at bay.

"I thought when they gave me this diagnosis, I changed my lifestyle; I have to do something about it, "Robert told CTV News. "I mean, I'm not just going to sit on my ass and let my brain turn into porridge."

Robert is now a first-year undergraduate student at King's University College in London, Ontario, where he studies twice a week in studies on political science and disability. He is also one of the faces of the Alzheimer Society of Canada "Yes. I live with Dementia "campaign to mark Alzheimer's Awareness Month in January. By "clarifying the facts about people living with Alzheimer's disease and other forms of dementia," the campaign aims to challenge "misconceptions so that the stigma surrounding the disease can be reduced."

According to society, more than half a million Canadians are living with dementia. In less than 15 years, moreover, that number should double to almost one million.

"A lot of people are diagnosed with something like Alzheimer's and think that, in some ways, it's the end," Robert said. "Well, it's not an end – it's just a new beginning, it's something you have to work on, and it's actually a good thing because I was getting really bored being retired! So that's a whole new challenge for me, .

At school, Robert made no secret of his diagnosis with his colleagues, many of whom are young enough to be his grandchildren. One common answer, he says, is "Well, you do not look like you have Alzheimer's!"

"Basically, I say I'm here to keep it under control and everyone thinks it's wonderful," added Robert. "They're very receptive to that. They kind of seem a little sad at first, but then I talk to them a little, so they're all for it. "

After a long career as a political journalist and advisor to former Prime Minister Pierre Trudeau, Robert's diagnosis at age 78 was a shock – even though two of his siblings died of the disease.

"I should be aware, but I was in denial, just like so many other Canadians are," Robert said. "We do not think we're going to make it."

Even as the diagnosis was delivered it was shocking.

"All they told me was number one, you have Alzheimer's disease, number two, you lost your license (driver's license) and the conversation is over," Robert recalled. "So you're basically alone, and by the way, I've heard it repeated many times by people with Alzheimer's."

So Robert decided to take matters into his own hands. Without effective medication to stop Alzheimer's, Robert felt that academic tasks and deadlines would help keep his mind sharp. The strategy seems to be working.

"I feel very good," he said. "Short-term memory is terrible; long-term memory has improved. I feel better mentally, and I think that's an important part as well. You need to be optimistic.

And if Robert gets disoriented or lost on the sprawling Southwestern Ontario university campus, his classmates always put him back on track.

"One or two or three of them can come and say," Are you okay? Can we help you? "Robert said. "You know, this kind of care means a lot to people like me."

Dr. Jeff Preston, who teaches Robert's Disability Studies class, describes the octogenarian as "very anxious," "passionate," and "like any other student."

"One of the best things about Ron being in the classroom is that he brings a different perspective: a perspective on his life, but also a perspective of someone who has a diagnosed disability," Preston told CTV News. "I'm so grateful that Ron is getting ahead of himself and saying," I'm going to add my voice … to this fight to think differently about Alzheimer's disease and dementia, "to say:" This does not is the end, this is just the beginning of a new chapter. & # 39; "

As for Robert, he hopes his example will inspire more research into living well after being diagnosed with Alzheimer's.

"What bothers me is all the money invested in research on Alzheimer's, it seems like it's always about the pills," he said. "I have not yet seen a study on how to handle it. I wrote a brief article recommending that a study be done based on what I'm doing and it's really hard to get the researchers interested in it. "

And what started as a way to keep his mind active also gave him some new goals as well.

"I want to get through this stage with some of these great, bright young adults … to graduate," Robert said. "I hope I'm the beginning of a wave – I hope all those people who are listening and giving up Alzheimer's just get out of their asses and join me here!"