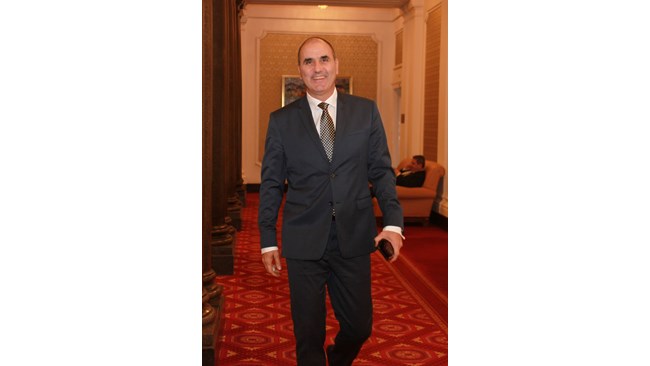 If Borisov's deputy does not take the initiative, even if he is convinced he is not guilty and has not violated the law with the replacement of the apartment, Bulgaria will enter a political crisis.

A whirlwind of unprecedented properties shakes the state – new names every day! Politicians or senior officials. No one cares about house prices and documents.

The apartment scandal is about to cause a political crisis that is likely to be long and painful.

In progress is Scenario 2 of the three possible to Tsvetan Tsvetanov's fate, which "24 hours" described – leaves the parliament and continues to lead the party and organize the elections.

Tsvetanov himself, who is in the United States, does not publicly announce his decision. And so it will be until Thursday when he will be in Sofia. The people who talked to him are certain that he is convinced that he did not break the law by replacing his house or negotiated with influence.

The prime minister, of course, believes that the reputation blow to the party is serious, and the person closest to the party has to take a step back. It is possible that if Tsvetanov refuses to listen to Borisov, his leader will remove him from all positions.

The scandal of apartments bought by senior officials of the GERB has triggered a political crisis that is likely to be long and tortuous and will not end only with the upcoming elections to the European Parliament. Every day, new and new messages began to appear to houses bought from different people, without anyone seeing the price at which they were acquired, but only who they were. Either way, if you're a boss, you do not need to sleep anywhere. Public opinion was kindly focused on the old archetype – an apartment in Sofia, and this became a common name for corruption. And if you have a villa in Vitosha or somewhere in the sea or in Greece or Italy, fine.

The great corruption nowadays is not to arrange an apartment in a nomenclature, for example, to acquire some business through a crowd or transfer to an offshore account.

But the apartment is an asset that everyone easily imagines and therefore is used to provoke a political crisis of indefinite scale.

The crisis has already

There were talks about a conflict between Tomislav Donchev and Tsvetan Tsvetanov.

There is a Facebook group called "Tsvetanov is innocent," for which there are two fundamentally different versions: one that Tsvetanov uses his influence on the ground to defend himself and the other is that Tsvetanov's enemies intentionally take such an initiative to anger Boyko Borisov and public opinion.

Tsvetanov's next move remains a mystery, which can be clarified on Thursday when he will be in Sofia.

with a light hand, for buying a larger house.

There are talks between the two most important in the GERB, which are completed in the few words below – the prime minister believes that the party's reputation blow is serious and Tsvetanov has to take a step back.

Tsvetanov himself is more than convinced that he has not broken the law and hesitates about the right decision. A decision that will not shake the GERB.

In a location near the BSP and President Rumen Radev, suspiciously detailed, and the situation at the top of the GERB is being accurately described and described.

"Epicenter" even threw a lightning that the party's parliamentary leader has already resigned and was removed from the party's executive committee. Although there was no such meeting, Valeria Veleva even described how he voted – Yordanka Fandakova, Dimitri Nikolov, Tomislav Donchev, Daniela Daritkova, etc.

exists but on Wednesday

and it is very likely that party leader Boyko Borisov will announce his decision if his deputy does not have a clear position.

The current deputy head of the GERB will probably resign from the National Assembly and will not be a deputy. He will remain as the second person in the party and will make the election.

If this is not done, Borisov may be quite separate from Tsvetan Tsvetanov.

"Borisov has created the party, he can also close it. He who knows it is aware that the leader of the GERB will not accept from morning until night that his party is attacked by property scandals," explained one member of the Executive Committee, who was quietly and vigorously following the development of the situation.

In addition to the suspicions that the attack on Tsvetanov comes from the people around President Rumen Radev, yesterday's speculation seemed to be an internal intrigue of the party.

Neither Tsvetanov nor Tsacheva ever cried because they bought houses. Tsvetanov himself lives physically at Latinka 8 in the middle of last year. The attack comes from the so-called Anti-Corruption Fund. In which in addition to officials of Ivo Prokopiev are also the former deputy minister Rumyana Bachvarova Philip Gunev, as well as his son-in-law Rosen Bosev, a journalist from the Capital. The fact is that the first publication of Polina Paunova was on the Free Europe site, but the complementary publications that give the hypothesis of something wrong come from this background.

This fact fueled speculation about an inner intrigue in which Tomislav Donchev, who is not the fame of an enemy of Tsvetan Tsvetanov, who can not be said by Rumyana Bachvarova, was not clear.

The rumors grow to the point that Donchev will cease to be a minister if Tsvetanov can prove innocence. At the same time, it is argued that

That is why he will not be the man in the government who organizes the election and will likely be replaced by Transport Minister Rossen Zhelyazkov.

Anyway, the GERB has suffered a heavy blow, and if the results of the European elections are below expectations, the whole government can resign. So we went into a real political crisis with an unclear outcome.

BSP has no resources

The smart and the handsome are wrested from endless strife, so a new triple quadruple coalition is waiting for us that will depend on vague business and other interests. So the other theory, which appeared yesterday that this is a hybrid attack of Kremlin origin, is becoming increasingly likely. It is no coincidence that the enemies of GERB always emphasize that this comes from an American site. Here we must note that, in principle, the media administered by the US government does not deal with subversion, but with the responsibility of the journalists themselves.

But the theory of American intervention has become so widespread that it may be a smokescreen that hides the true origin of the attack. Still, Tsvetan Tsvetanov is a pro-Western protonist and is currently in the United States.

Radev: The parties must be cleaned of corruption, not waiting for scandals and then erasing with renunciations

I just warned you two months ago that is the bet for all who want to have them in the political horizon, he said of Egypt

My position has always been principled. Two months ago, during my annual report, I made it clear that the parties that want to see themselves in the future political horizon must be cleaned up by corrupt and incompetent executives with managerial ambitions, without waiting for scandals, and extinguished them with resignations. "Thus, President Rumen Radev commented from Egypt on the scandal with the apartments of the GERB and the two resignations. The head of state explained that his words are everywhere.

"Egypt has a key role to play in the region in the fight against terrorism, organized crime, radical Islamism and illegal migration. That is why cooperation with Egypt is important to our national and European security," said Radev to journalists in Cairo.

He explained that Egypt is also Bulgaria's largest trading and economic partner for the Middle East and the whole of Africa. Trade has already surpassed $ 1 billion, but there is still more potential for development – so the president explains why it brings with it an impressive business delegation in important areas of mutual interest. He expected a series of agreements between representatives of companies from both countries and "really good agreements".

Radev added that dialogue and mutual trust at a high political level are very important conditions for this potential to develop.

Plamen Georgiev also interfered in the scandal. He: I do not have apartments bought at low prices

The invasion of the apartments, purchased at lower prices than the market, also involved the name of the chairman of the anti-corruption commission Plamen Georgiev. According to Frogness's website, near banker Tsvetan Vassilev, in 2012 and 2017 he bought 2 apartments, 3 parking lots and a garage for a total of 527,095 leva, which was well below the market price. Their houses have nothing to do with Artex.

"I do not have an apartment in the Yavorov alley or the Iztok district," said Plamen Georgiev "24 hours", both of which are in the "Geo Milev" district and are bought at absolute market prices. From his 2013 statement, he and his wife, a dentist, bought an apartment in 2012 for BGN 207,318, of which BGN 166,246 were credit.

"This apartment was sold to us before Act 16 along with two parking lots, which can only be used for a car. Although they are sold together with the apartment, there is no market logic in which the cost of their squares is calculated as a cost of living space, "Georgiev said.

In 2017 the family buys a dwelling in Geo Milev. It is on the top floor with a leak in a 10 year old building. The apartment has 156 square meters and costs 293,374 leads Georgiev paid 189,500 leads with credit and the remaining money was from the sale of a hereditary apartment. The average price in this neighborhood is 1187 euros per square meter, said the head of the commission.

Deputy Energy Minister Krassimir Parvanov, however, is among Arteks' buyers, the Bivolli website announced. On September 28, 2018, he bought an apartment of 150 square meters and two garages for 240 thousand leva, or 616 euros per square meter The properties are in a new building in Tintyava Street, where one of the apartments Vezhdi Rashidov.

Arteks' client is also the former head of the Communications Regulatory Commission Veselin Bozhkov, who bought a home for 682 euros per square meter. Member of the Supreme Judicial Council Gergana Mutafova enters into a property agreement with Arteks for a dwelling in Tsetska Tsacheva's building. In June 2018, Mutafova bought an apartment for 1147 euros per square meter – much more than the property of Tsacheva.

Construction Contractors Association: It is unacceptable to wage political battles to create jobs that create jobs

The National Association of Building Entrepreneurs, as an organization in the field, is concerned about the emerging guilt emerging from the guild, based on the investigation of specific property agreements by political figures.

We strongly oppose attempts to divert the focus of public debate from the essence of the problem to the producer who created the product of the agreement.

SPAS supports transparency, legality and ethics in this sector of importance to the Bulgarian economy and we always insist that these principles be respected by all stakeholders – entrepreneurs, citizens and institutions. The respective state bodies are also responsible for observing these principles.

We find it unacceptable to involve one of the few remaining productions in the main political battles, creating jobs that bring budget revenues and create national value.