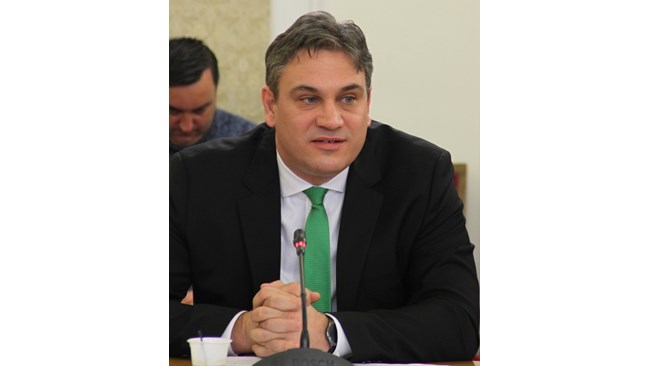 9 months before the end of the term of chief prosecutor Sotir Tsatsarov, the shooting of potential candidates for his successor began with full force.

On January 19, 24 hours, he published an article entitled "The shootout of chief prosecutors" was launched on the occasion of an ugly and unworthy attack by former chief prosecutor Nikola Filchev against his successor Boris Velchev.

Two months later, on April 4, the newspaper's forecast turned out to be true. And while the actual promoter's choice of 1 has been over 6 months, the war is underway.

Plamen Georgiev. Until two weeks ago, he was considered Tsatsarov's successor at greater odds. However, since March 25, his name has been implicated in another estate scandal that speeds up the state, and Georgiev's appointment seems less likely.

Tsatsarov's deputy governor and the head of the National Research Service (NIS), Borislav Sarafov, descended on the ravine of Apartmentgate. Although his name does not yet belong to the candidates for the future Chief Prosecutor, Sarafov was a competitor to Tsatsarov 7 years ago and nothing prevents him from trying again.

The mandate of the current promoter No. 1 expires in early January next year. Until then, the Supreme Judicial Council (SJC) has to elect a new Chief Prosecutor. The procedure can start as early as possible on 10 July and at the latest in September. What

battle for the main

Then, in an ugly way, former chief prosecutor Nikola Filchev fired, and for the first time so dishonestly, his successor, Boris Velchev, current head of the Constitutional Court. In an interview with RIP, Filchev accused Velchev of wanting to head the charge again, and in that he found the support of the government. Even Velchev tried to misinterpret the constitution, which does not entitle him to a second term. Where Filchev came to this conclusion, he did not understand. The 24-hour forecast, however, that the shooting would have been prior to the appointment, was accurate.

The conclusion of April 4 is that anyone whose name is circulating as a candidate for a chief prosecutor,

So far, the deputy of Georgiev and Tsatsarov, the former head of the office of special prosecutor Ivan Geshev, was the safest candidate. Both publicly denied that they intended to participate in the battle.

KPONPI's own boss said he expected the attacks. According to him, they came from oligarchs to whom the Commission confiscated property and against whom the confiscation cases took.

The apartment saga for the anti-corruption chief left the Frogness website on March 25. Media, which gives a position to the former head of the CCB, Tsvetan Vassilev, owned by 2 billion leva was taken by the commission headed by Georgiev.

The site said that the head of CPCONPI did not declare a terrace of 186 square meters. In a statement to the media, he explained that he was not part of his Geo Milev home, bought in 2017 because it was a common law by law. Georgiev even published his notarial act.

According to his acquaintances, his candidacy for the Chief Prosecutor met with the approval of the government, but also of Boris Velchev, an indisputable authority in magistrate circles. In fact, the head of CPCONPI's boss emerged 10 years ago, when the prosecutor's office was headed by Velchev. Georgiev was a monitoring promoter in signing cases like Sofia's Property. He was then invited to the Deputy Minister of Justice of Margarita Popova, who before becoming the vice president of Rosen Plevneliev was Minister of Justice in Borisov 1 office.

Sarafov, who has been head of the NSS for two years, was involved in a property scandal a week ago. The Bivolli website reported that his 21-year-old son, Bobbi, owned two apartments for a total of 540,000 in 2018 and 2019. However, the funds were not stated in his father's statement, but because of his age, young people simply they could not afford it.

"But because there are people in the judicial system too

Both the KPONPI, the SCC and the investigation.

I am not mentioning names because they are very sensitive. "This was announced by Prime Minister Boyko Borisov on Thursday at 8:30.

for the next series "Apartmentgate".

He ordered inspections of Plamen Georgiev, son of Borislav Sarafov, head of the national investigation, and the wife of the president of the Supreme Court of Cassation, Lozan Panov-Elisaveta, in connection with his real estate transactions. (For her to see – below.)

The prosecution has announced that Plamen Georgiev will not be inspected by the commission he presides over, but by the NRA – Sofia. The tax will clarify whether the chief of KPONPI and his wife Irena, who is a dentist, have paid their taxes under the Individual Obligations Act. The second part of the check will include the declared income of those actually received between 2013 and 2018. The tax will also require the deed of the housing acquired by Georgiev and his wife in 2017, as well as the notarial contract.

From the First Investment Bank, which granted your loan, you will be asked for information about the loans of the transaction.

Georgiev's reaction was also lightning. At 8:55 am, the KPKPPI press service issued a statement saying it was on leave while the check was in progress.

"I say that I have always respected the laws and in my activity I am guided by high moral principles and professional standards. The investigation is an occasion to establish that I have never committed any illegal action," says Georgiev. According to him, a war of compromise is being waged by those affected by the commission.

President Rumen Radev's reaction was not too late. On your facebook page

he is taking off

by the head of

and does not invite him to the National Security Advisory Board on Monday on high-level corruption.

Even if the investigation proves that Georgiev did not break the law, he will hardly return to the game as a chief prosecutor – the apartment saga will be constantly reminded of him.

Borislav Sarafov also went on leave. He said he was ready to cooperate fully with NRA and KPONPI reviewers. I declare categorically that all my actions are within the law and do not contradict morality. The income and property – my and my family are properly stated, "said Sarafov, called" 24 hours. "Even if he intended to run for a chief prosecutor, the odds were zero.

The only one in the prime minister's call to leave or resign did not hear the head of SCC Lozan Panov. He, of all, whose names have been involved in the scandal, shows that he does not intend to leave until the check ends. After the call of the prime minister, Panov commented that there is no property indicating that the apartment is the company of his wife. (See below).

Lozan Panov and his wife live in the suburb of Izgrev, using 2/3 of him. Him: I am the most unhappy!

The head of the Supreme Court of Cassation (SCC) Lozan Panov and his wife Elisaveta live in the apartment of the wife of Elemag Street, in the Izgrev district of Sofia. This is the unfortunate house that has caused a scandal surrounding the family of the senior judge, bought at low prices by Arteks Engineering. The owners of Vesela and Plamen Miryanovi later acquire the marriage of Panovi.

housing, the other part

Previously, they lived in a Panov apartment on Vitosha Blvd.

The apartment in Izgrev is actually the reason the chief prosecutor ordered a check on Thursday. Sotir Tsatsarov sent media reports on Panova's estate to the Supreme Court Council, which will investigate the president of SCC for a conflict of interest. Last week, Panov's wife announced that the property had been acquired before marriage by the head of the Supreme Court of Cassation. Besides, he did not know the Miryanovs. He met them two weeks before the wedding ceremony in February 2015.

to conduct a tax audit of the circumstances surrounding the Panova property agreement.

"In the scope of the tax audit, it is ordered to establish the source of the funds for the purchase of the property, how to use it, as well as compliance with tax legislation in connection with this transaction," are assigned by the Public Prosecutor.

"It seems like I am the latest person – I am not a property owner, but I have to give up work, resign or leave," SCC president said yesterday in his first comment after the scandal surrounding his wife's apartment . .

Asked if he knew about Elisaveta's agreement with Arteks when he married, as it was completed before his marriage, he replied:

that I knew how

you are not going

Asked why his wife is paying rent to his owner, Panov said: "By law, when the owner is a legal person, of course he must rent what he hired."

Panov commented on the charges against him and his wife. "This is another NRA check against me and my family, and this agreement with the apartment has also been subject to a NRA extended tax audit, which has not yet been completed," said the judge. 1.

He added that everyone has the right to choose their kums, referring to the Mirjanovs.

"This is a personal decision!" Panov interrupted the Supreme Judicial Council on Thursday.

On April 3, Elisaveta Panova invited a journalist to a press conference, but then canceled the event for which she had rented a conference room in Sofia.