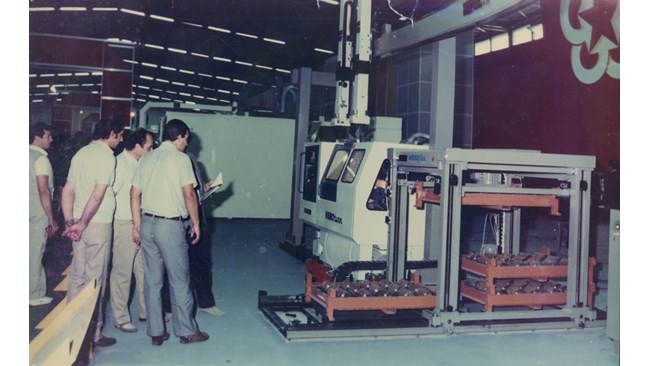 Over the years, not only the words in the Bulgarian river, but also the abbreviations in it. Few now remember that APC for 30 years meant an agroindustrial complex, the cooperative farm was a cooperative farm, and the TPK – labor-producing cooperative … The line of disappearing concepts of mass use was also popular in the 1980s. Abbreviation of the last century GAPS – only an expert today will realize that behind the four letters of the abbreviation is the notion of a flexible automated production system.

Although such a production organization exists even now – for example, at Arsenal's military factories in Kazanlak. 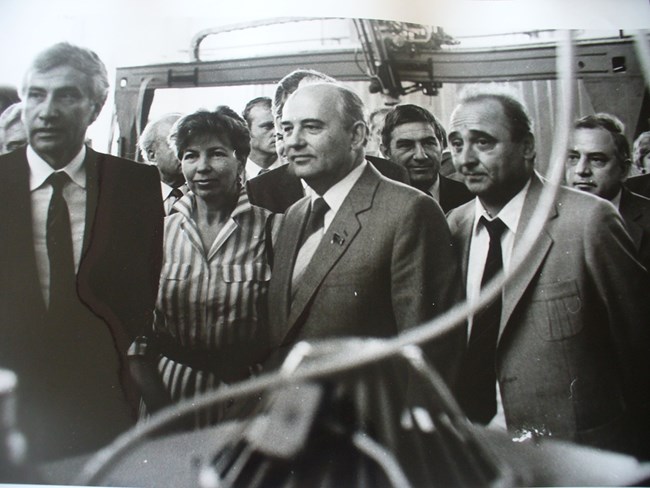 On September 11, 1984, Mikhail Gorbachev and his wife Raisa visited GAPS at the Beroe plant in Stara Zagora. On the right is his chief executive, Eng. Vasil Tyrkidjiev, behind him is Ognian Doynov. IMAGE: Files

So, they reasonably argued that GAPS is one of the most progressive directions in the robotization of technological processes, the system was considered the pinnacle of high technology in machine construction. The first of these workshops in our country was opened at the Stara Zagora Robot Complex on September 5, 1983, personally by the first Party and the Head of State Todor Zhivkov. However, they have not yet formally spoken about the GAPS, but about the expansion of the Beroe robotics plant and the introduction of automated production lines for industrial robots into practice. After the official ceremony, Zhivkov wrote in the honorary book of the workshop: "When we give enough and better plants with which we can produce everything, then socialist Bulgaria can really export intelligence and receive the national income of the" gray substance "of its talented people" . 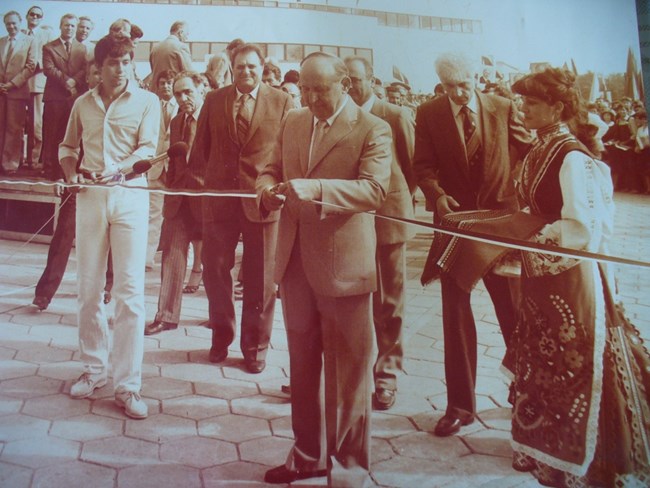 On September 5, 1983, Todor Zhivkov personally opened the first GAPS in Bulgaria – at the Beroe plant in Stara Zagora. IMAGE: Files

The interest in this production organization was great. It was no accident that one year later – on September 11, 1984, the BPSO was one of the stops of the Soviet delegation led by the father of perestroika, Mikhail Gorbachev, who visited Stara Zagora. At that time he was still "just" a member of the Politburo and secretary of the CCP, the secretary general was half a year later. 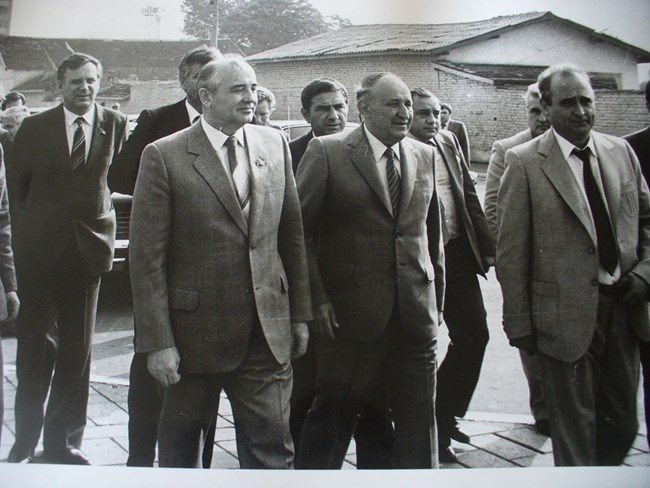 Today the GAPS have long been distracted and their machines are sold separately, but the cypress trees planted on that visit by Gorbachev and Zhivkov at Friendship Alley are still alive and healthy in the former courtyard of the nonexistent Beroe factory. Although the posters next to them have disappeared, it is difficult to determine which tree from which it was planted. 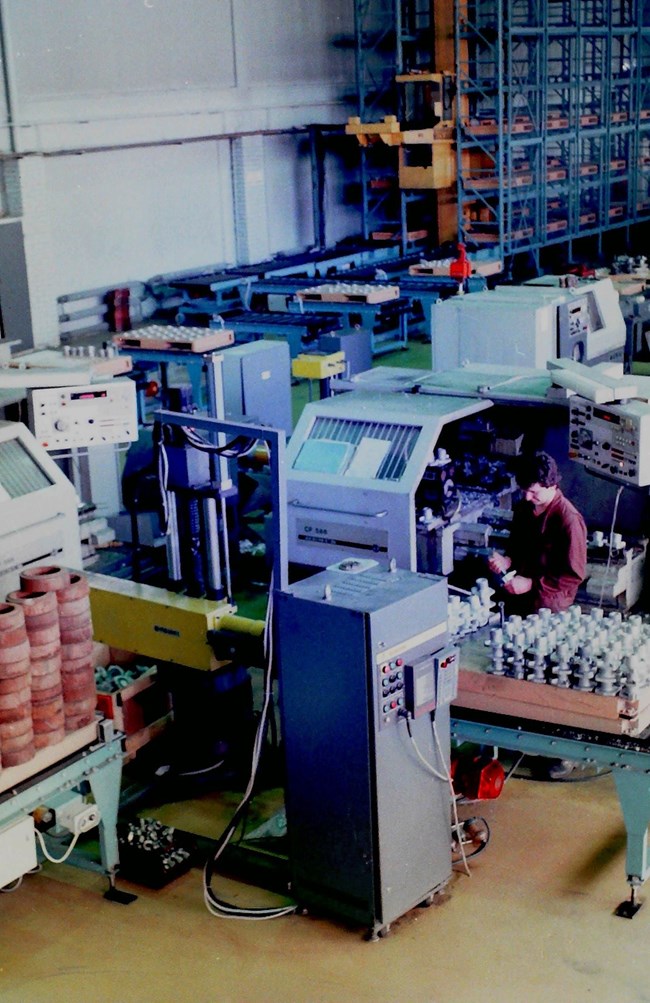 The hall with GAPS training in the factory. IMAGE: Files

"In fact, the flexible automated production system is a workshop – a clean cabinet where the most commonly used metal cutting machines with programmable digital control, these machines are serviced by the workers and robots, virtually the technology is abandoned, only the work is define the tasks of the machines and put them into operation.The robots execute the transport activities between the different machines – they carry details, etc. and have central control over a computer ". This explained to "24 hours" the last director of the Beroe plant prior to the privatization of Petar Tsaklev. 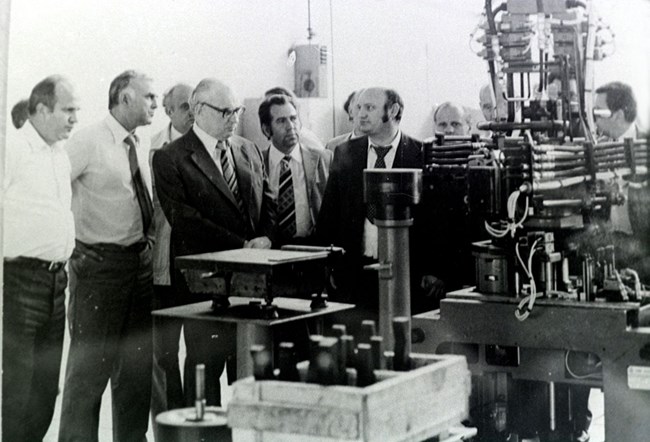 Another visit from a Soviet delegation to the Beroe factory in Stara Zagora. The photo is not dated, but the chief editor of the time was Vasil Nikolov (in the middle with the baccards). IMAGE: Files

In the early Bulgarian GAPS, they produced details of industrial robots, which are an indispensable element … of the GAPS itself. "Our experts saw this system in the Japanese company FANUK, which was a pioneer in this respect.The state that wanted to develop the work invited Japanese experts from FANUK to build the GAPS in Stara Zagora and it is no coincidence that Japanese and Bulgarian machines are in it. worked around 40 machines, so they unofficially said it cost about $ 10 million, "recalls Peter Tsaklev. 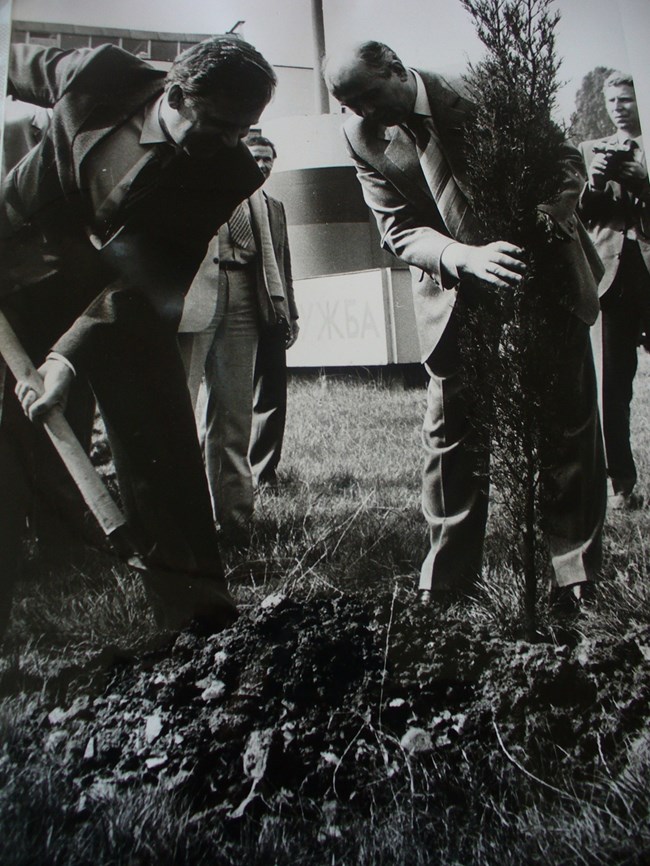 Mikhail Gorbachev followed the tradition of guests from the Beroe plant to plant their own trees in Beco da Amizade. IMAGE: Files

Industrial robots, of course, are not those creatures known in the movies who smile, speak, and look like people like that. Tsaklev recalls that in practice, robot is any automated device that does some work, even the washing machine at home. But according to the complexity of operations and their degree of intelligence, these devices are manipulators, workers, robots. First, they replaced the workers in their auxiliary functions, then "appeared" as working machines – painting, welding, assembly. 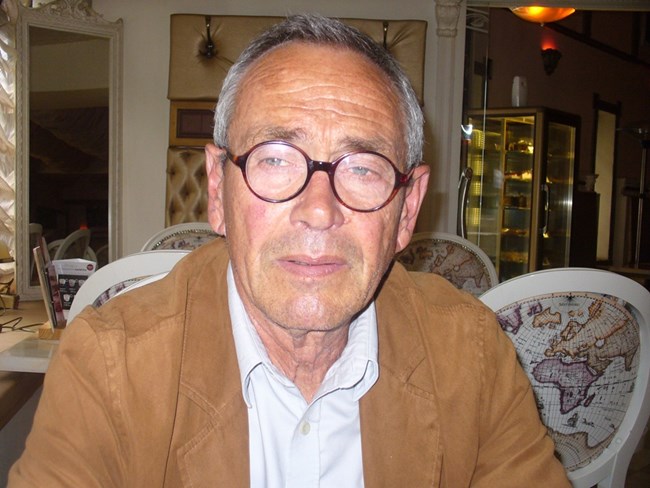 Petar Tsaklev was the last director of the Beroe factory in Stara Zagora before its privatization in 1996. IMAGE: Vanyo Stoilov

Engineers say that the industrial robot is an "automatic machine with a robot-manipulated manipulator with two or more degrees of freedom, and with a pre-programmable control device to perform engineering and control functions in the production process, substituting analogous functions of the person in moving the manufactured articles and / or technological equipment ". Industrial robots are elements without which complex automation of processes and processes is impossible. By using them in the operation of digital control machines, microprocessor engineering, etc., one does not participate directly in the production process, but assumes the functions of its creator and controller. Industrial robots are a basic prerequisite for creating primarily new technologies without direct human involvement and immense social meaning – they do not have or eliminate the heavy physical and monotonous work. "

This theory shared power in Bulgaria and transformed the former assembly plant of metal cutting machines in Stara Zagora into a robotic factory with its Scientific Institute. As they said then, people were learning "on the move" – ​​in addition to production, they created their pictures. According to 1986 statistics, the average age of 1700 employees at the Beroe plant was 32 years.

In an interview with "Otechestvo" magazine in 1986, the executive director of Beroe's workshop engineer, Vassil Tirkedjiev, said: "Beroe" is the end of the success of large organizations like Elprom, Hydraulics, IZOT and more than 75 other companies involved in the production of robots … We produce 18 types of robots, of which two are licensed and the other 16 are created by our Robotics Research Institute, which is an integral part of the factory. 80 percent do not need robots from the socialist camp Our main consumer of the largest group -. electro gantry robots with a capacity of 10, 40, 80 and 160 kg, is the automotive industry of the Soviet Union, whose companies employ more than 4000 manipulator. "

In those years, a small Bulgaria is the second in the world of manufacturing industrial robots after Japan. More than 2,000 Bulgarian robots were exported only to the Soviet Union. At that time, the scientific association "Krasniy proletariat – Beroe" was created, which connects the world 's largest factory of metal cutting machines with the existing practice of Bulgarian specialists in robot creation. We have already talked about the development of the production of sensory devices and devices, which, added to the robots of the current generation, had to lead to their next generation. They gave you a small horizon for this – 5-6 years.

The work involved problems and tension. Thurkedjiev, for example, died of a heart attack in his director's office a year after giving his interview to the homeland.

It all collapsed since 1990, when Bulgaria lost the vast and lucrative markets of the collapsing Soviet Union in new conditions. The new Robots Institute building was unfinished. The company is trying to survive with new productions that have nothing to do with robots – such as tire production machines. The Beroe plant was placed in the bar for sale during the mass privatization in 1996. Its first major buyer is the AKB Forres Privatization Fund. Over time, a complex transformation of ownership of the old pride of building socialist robots followed, until October 31, 2003, when the Stara Zagora District Court officially disrupted its operations. At that time, the claims of the creditors were BGN 11.5 million. The court even rejects the rescue plan proposed by the owners at that time – a transportation company because it discovers that the factory does not have enough buildings or machinery to produce and deplete its tanks.

Beroe's pride, GAPS, is sparse, their machines sold separately. The same automated production system in another Stara Zagora industrial giant – the privatized electronics giant DZU, which is part of a Hungarian company, has long separated from the big electronics.