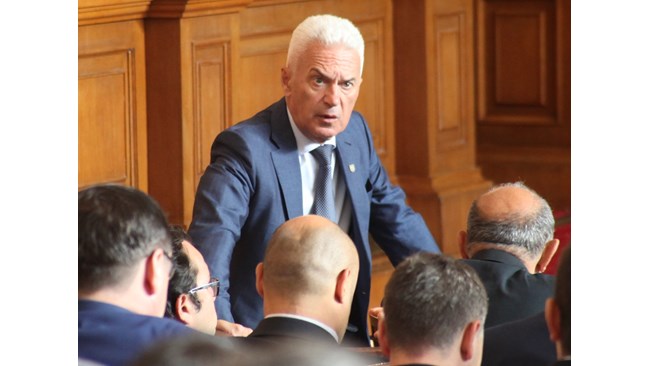 Siderov also demanded his resignation so that the patriots begin "pure"

Deputy Prime Minister Krassimir Karakachanov will be "creative" until Tuesday under Volen Siderov's proposal and he will resign and the patriots will remain without their own.

"This is a creative proposition. I continue to think creatively and, as I have said many times, the issues of the coalition are right, even if they are creative, to discuss with each other. it's okay to resign, "Karakachanov told bTV.

At the end of Saturday, Volen Siderov, who was one of the leading voices for the resignation of Valeriy Simeonov, has launched a Facebook post asking Krassimir Karakachanov to leave the government to start "clean."

"Let's do something patriotic to clean up, because the two did not pass the test, to decide whether we can be a patriotic bloc that gets clean," argues leader Ataka. And he and his VMRO and NFSB colleagues asked to set priorities to see if they could achieve them, because "turning to power only for the sake of the bug is a perversion."

Siderov insisted that this was not an ultimatum for Karakachanov, but made a friendly proposal to "bring it back to reason," because both he and Simeonov "lost touch with reality." He later explained that this is really "creative" advice. And the patriots were wrong, throwing two of their leaders into the executive.

"I will continue to think creatively on Tuesday when I hope your proposal will be developed in our coalition council," Karakachanov said. There are two options – or the OPs continue together or not, he comments more seriously.

"If you think you can" creative "on the back of your partners to make a personal image, I personally think there is no sense in such a coalition," added the Defense Minister.

"The first words that I will tell Siderov are" a good day "and then I invite him to have a cup of coffee.I do not feel bad about myself.If we keep the good tone in the interests of Bulgaria, a deputy prime minister less or but it does not matter.It is not my childhood dream to become Minister of Defense, "Karakachanov said. He hoped there would be no conflict between Siderov and Simeonov after the second in parliament.

The Patriots have not yet discussed names for a new deputy prime minister. "If the application is appropriate, I will support it. If not, I will tell others, but not through the media," said the IMRO leader. And of course there should be no change in the coalition agreement. Although our coalition is now very strange, there is an urgent need to prioritize our management agenda, Karakachanov added.

He told the prime minister that he had a "normal" reaction to Simeonov's resignation. My buffer role is over. If someone wants to work, it works, he added. "There are over 400,000 people in Bulgaria who do not want to work, but we can easily make a protest," Karakachanov said. That there are protests, but not at the expense of the majority of society, the deputy prime minister called.