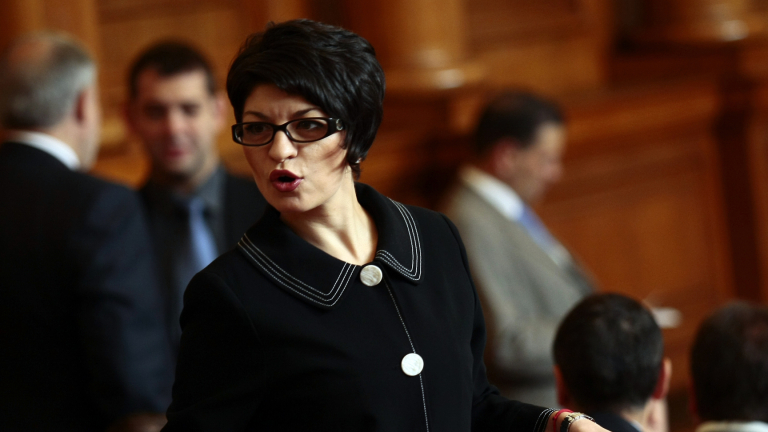 BSPs are in a schizophrenic situation. This was announced for bTV by the MP of the GERB Desislava Atanasova, who entered a dispute with his BSP colleague Alexander Simov for the salaries of Members.

Desislava Atanasova: "They (BSP) are in a schizophrenic situation. Well, yes, it's schizophrenic, how was the situation with the resignation of Valeri Simeonov, which you voted against. Now it's the same. They say a month ago – we are not going to the parliament while Valery Simeonov does not resign, he gives, they vote against. One month they say they will not be paid and will not use official cars, and at one point it happens that they do not just pick up, but they take almost 3,000 leads and use official cars to show their vision. to Bulgaria. "

The Socialist asked to clarify things in the air. He said: "There are many things to say about this, reading Atanasova in political details is interesting, but I'm afraid – not true." We voted against the resignation of Valery Simeonov because the majority of the GERB refused to split the two decisions. voted for the resignation of Valeri Simeonov and then the new deputy prime minister. The fact that the GERB was purely schizophrenic, namely, they refused to split these two things, led to that vote."

The controversy between the Germans and the Socialists did not renounce the resignation of Simeonov, but at the center of the negotiations was the question of the size of parliamentary salaries.
According to Atanasova Socialists have no right to talk about wages because they are not in parliament, do not go to work and, at the same time, receive a full salary.
Simov's opinion is that the Socialists are absent from parliament to hear the opinion of the citizens of the country, presenting their "Vision for Bulgaria".the absence of a Red MEP from the parliament was an innocent absence, for which they have not received a salary. In addition, the Reds did not use official cars, as the leader Kornelia Ninova announced in the pulpit of the Parliament.

Atanasova, however, presented data according to which this is not the case. In her words Last week, on Thursday, November 22, the socialist visit to Malko Bolyarovo and Golyamo Bolyarovo used a service car.
"On Thursday, the visit to Malko Bolyarovo, Golyamo Bolyarovo and other villages, which Cornelia Ninova announced from the parliamentary bench, occurred outside working hours, a fact with a parliamentary car," said Atanasova, interrupted by Simov with the question : "Cornelia Ninova went to parliament!"
Gerbera continued: "No, another colleague, I will not mention his name, only in his presence would I do … Why did he use a car in parliament?"

The Socialist was categorical: "When we present the vision, all BSP parliamentarians, who are not under parliamentary regulations, do not use service cars, do not use official transportation, we use … We have colleagues who are committee leaders and regulations that have the right to use a car… I did not use commercial transport presenting a Vision for Bulgaria. "
It is here that the Atanasova attacks have arrived, that the BSP is in a schizophrenic situation. In this context Simov called Atanasova to take a look at the parliamentary group of the GERB and show it how often the MPs of the ruling party used service cars and "how many miles they have".

The BSP proposes to reduce wages with 500 leva.

The increase would be a ritual suicide of the political class

Studio leaders broke the dispute by addressing some specific issues for the socialist.

Question: "How much money does each of the BSP parliamentarians in Bulgaria suffer on average because it will not work?"

Simov: "Look, I really do not have this collapse, but I can do it, on average, about 600 leads per month."

Question: "What reasons are absences absent, because for justified absences money is charged".

Simov: "We do not excuse these absences when we are going to Vision for Bulgaria."

But then the studio guys filed an official record of Parliament's records for the month of September, when a red-boy boycott in parliament was announced. According to the bTV report the excuses of all BSP deputies for the month are 110 and those that have not been varnished – 121.

Simov: "Look, there are colleagues who may be absent for some other reason, and that's part of the apology." Excused absences include, perhaps, walking on business trips and something else. The Socialist was again questioned whether the Red MEPs apologized for his lack of vision when they presented the vision, and he again categorically denied it.

Question: "Should we pay Ms. Cornelia Ninova as taxpayers when she presents her vision, through her salary, or is it right to pay us back as taxpayers through the BSP grant?"

The leaders once again referred to a benchmark of parliament. It happens that in September Ninova has 1 apology and two unapproved absences. The abovementioned absence is dated September 27, when she did not appear in the National Assembly. At the same time, however, the media writes that it is presented the Bulgarian Vision to EU ambassadors.

Alexander Simov defended his leader. According to him, Ninova defended the vision of the BsP not before anyone, but to the ambassadors of the EU countries. This was not a meeting with the electorate in the country, but with very important political representatives from Europe.

"What else to introduce to them … their opinions on the latest fashion lines"he asked ironically the Socialist, which caused a laugh in Antonova:" EU ambassadors are interested in seeing the BSP alternative, and I suspect that Cornelia Ninova has had many other purely official functions. "

Asked if the GERB, which has a majority in parliament, would cut parliamentary salaries, including those who are not often at work, she replied that according to her, was right, but if everyone in parliament, no matter what a group parliamentarian, they are committed to the word "justice."

Otherwise, Atanasova presented a receipt for a parliamentary salary received from 2013, when the government of Oresharski was going, and the gerberas were in a position of boycott. She also called on the Socialist to present a slip of the current boycott. He promised to present his salary receipt tomorrow, Tuesday. Gerbera interrupted him with the words: "No, on the contrary, within 5 minutes, I will make you a reference, you will have time, until 17:30, the accounting office of the National Assembly is working." I call the other and the other colleagues.

According to Simov, however, there was an essential difference between the rumors of the then and the current BSP – in 2013 the MPs of the GERB completely boycotted the work of Parliament and some of them could be seen on the beaches of the country. The current socialist boycott was specific– they had suggestions to protect, and this was very rare with the dominant majority. The Socialists Really participated and continued to participate in the discussions, he said.

Rumen Radev does not interfere in the party kitchen

If they wish, deputies can reduce the president's salary as they see fit.