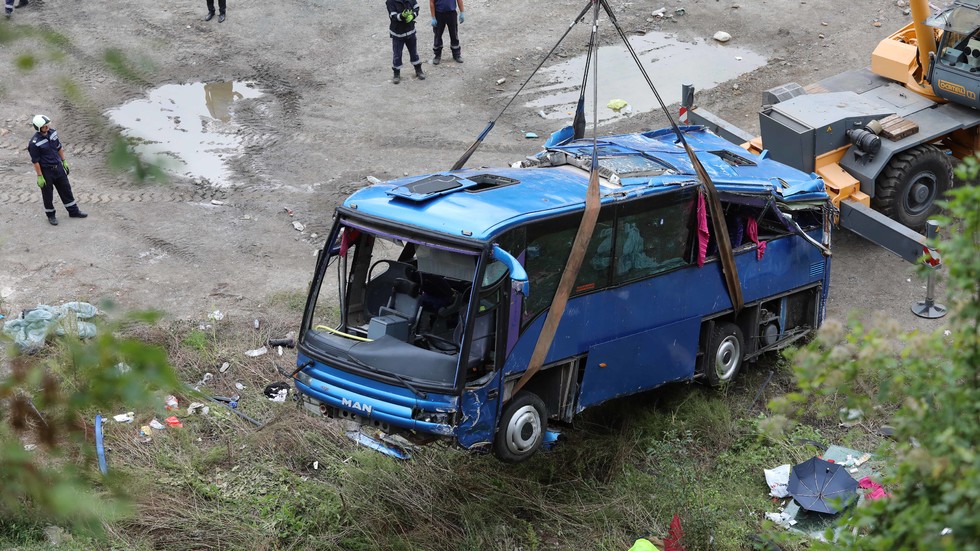 The prosecution has attracted more than 7 people as defendants in the case of the serious accident near Svoge, which killed 20 people, and 8 had medium bodily damages.

The defendants are two former board members and a director of an IPA board. Public Prosecutor clients are also the executive director of Trace – Sofia EAD, the road repair contractor, the technical manager, the head of the asphalt base and the engineer responsible for supervising the construction of the works.

"Two members of the RIA's board of directors have been charged with a service offense, and five people are charged with a traffic crime committed in an independent consensus with the bus driver," the state prosecution said.

A day after the tragic accident, the District Attorney's Office in Sofia attracted the bus driver Grigor Grigorov as an accused. He is forbidden to leave the country and has removed a book.

Is he guilty of the Grigor Grigorov accident?

Immediately after the serious incident, under the leadership of the Sofia District Attorney's Office, a pre-trial proceeding was initiated. Chief Prosecutor Sotir Tzatsarov announced that the Public Prosecutor's Office will investigate the severe bus accident near Svoge in three areas – the actions of the bus driver, the obligations of the transport company – the transporter and the state of the road and instructed a team of investigators from the National Research Service to conduct the investigation.

Here is what is said in the Attorney Report:

On 08.31.2018. Investigators seized 9 samples from a road survey (pavement samples) that were provided to the expert witnesses for performance of the asphalt blend and met the approved revenue for a mixture of asphalt for the wear layer of the road cover. of statutory standards.

In the pre-trial process, conducted by Sofia-Sofia (for traffic offense) by the SGB / for an offense in the service / were performed numerous actions of procedural investigation and a large amount of evidence was collected. In both cases, 10 inspections were carried out, 155 were questioned

witnesses, a total of 46 experts were appointed. A large sketch of the scene and a variety of dynamic sketches were prepared with the sites and end points of establishing the process vehicles

It is clear from the evidence gathered in the case that, when moving in the right corner, in a double-lane road formed by two tracks, on wet asphalt pavement, MAN's bus entered the range of cars that were approaching and hit Nissan Primera (first stroke) and Citroen Berlingo (second stroke). After the second blow, the bus left the traffic lane to its right, hit the elastic fence, crossed it and entered the side skid. When he fell, the bus turned and settled on its right side on flat terrain.

The speed of the bus at the time of entering the curve is about 53.5 km / h, and at that speed the driver of the bus did not have the technical possibility in the condition of the wet asphalt to pass through the road section of the curve without entering the road opposite. Scotch tape. Such a technical possibility was provided by the bus driver if he had adhered to the maximum permitted speed of 40 km / h. The prosecution therefore continues to hold charges against the driver Grigorov for violating the traffic rules, resulting in negligent deaths of 20 people and personal injury to 8 injured, which is the main reason for the road accident.

From the evidence collected, there is also a technical reason for the occurrence of an accident, and this significantly reduces the coefficient of adhesion between the tires and the asphalt because of its poor quality. As a result of the non-conforming structure of the road surface, the coefficient of adhesion has been greatly reduced, which is causally related to the occurrence of road accidents. The roughness of the road surface by depth indicator was considered unsatisfactory. The resistance to sliding of the road surface is less than the minimum allowed.

The construction documentation for LOT 17 implementation of the Transit Roads V project has requirements for the type and quality of the input material. The requirement was that the asphalt mixture had a large broken stone with a polishing capacity of not less than 50.

The conclusion of the expert's report found that the asphalt mixture is not gravel but crushed limestone and the accelerated polishing factor is 28. The absence of large rock material leads to the creation of a good skeleton of the asphalt layer and the susceptibility to formation . on the runways and low grip between the vehicle's tires and the road surface. This state of the road section in the accident site area is a cause and effect relationship with the heavy result.

It was found that the road in the accident area, given the intensity of its loading, according to established rules and requirements,

be protected with steel safety fences with high retention capacity. It was also found that the project documentation did not even include the installation of a spring protection fence.

Evidence gathered shows that an elastic safety fence mounted in the accident area could not contain a road vehicle – a bus on the road surface.

Talk to the victim of the accident near Svoge, lost her husband (VIDEO)

Taking into account the evidence gathered from the actions taken by 5 different employees involved in the repair of this stretch of road and the documents they produced, certifying the exact and qualitative performance of the repairs and the type and quality of the inputs, for the criminal liability of the following persons, transportation officials:

– I. Ivanov – technical manager, who was duly assigned to the repair of the roads according to contract of employment № 337 / 13.05.2013. concluded with Trace – Sofia EAD;

The criminal responsibility of the five officials is compromised by the fact that, through their actions and omissions, they caused negligence along with the bus driver Grigorov, with the death of 20 passengers and bodily injuries on average to eight victims.

The evidence gathered by the GSP justified the allegations both of Doncho Atanasov and Svetoslav Glosov for being members of the AIP Management Board responsible for the activities of the Directorate for Management of Strategic Infrastructure Projects and for "road infrastructure" did not comply with the its official duties laid down in the Road Law and the Internal Regulations of the Board of Directors of the RIA in order to obtain a benefit for Tras Svoge DDT and have had significant detrimental consequences. They were arrested on April 17, 2019

Tras Svoge's target tax is represented by the inability to repair the company over repair of defects. There have been significant detrimental consequences for drivers in section 3 of road II-16 "Svoge – Novi Iskar", which endangers them

performing a collision, resulting in a greater stopping distance and loss of stability of the vehicle during the maneuver, as a result of the reduced slip resistance of the area.

The investigations in both cases continue.

EVERYTHING FOR THE TRAFFIC INCIDENCE READ HERE

The news of NOVA – already in Instagramfollow us. For more news, please visit our Facebook page HERE.