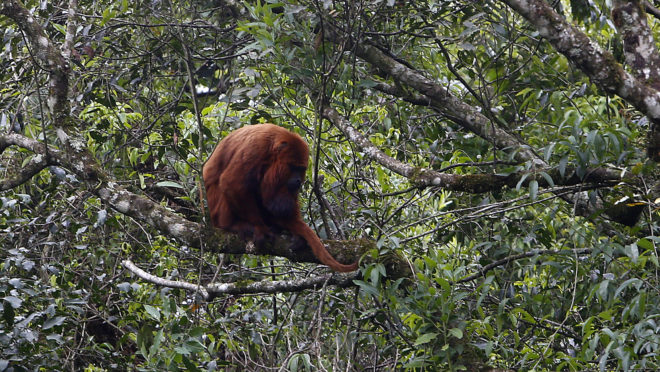 An adult howler monkey was found dead on Monday (15) in a forest area near the banks of BR-116 in Quatro Barras, in the Metropolitan Region of Curitiba. Although there is insufficient evidence to link the death of the animal to a possible case of yellow fever, the city council said the case should serve as an alert to reinforce the incentive to immunize against the disease in the city.

This is your free day story. Sign up now and have unlimited access.R $ 0.99 in the 1st month

RECEIVE news from Curitiba and region in your Whatsapp

The animal was found near the highway connecting Curitiba to
São Paulo, but in an area still far from the urban zone. According to the city hall,
the body of the monkey did not undergo exams because it was already in advanced stage
of decomposition.

At first, the howler bore a solitary way of life. No other animals of the species were found nearby and there is no indication, for now, that there are more dead animals in the area where the body was found.

Read too: Health confirms another resident of Curitiba with yellow fever

So far, no case of yellow fever has been detected in the
County. In the neighboring city, Campina Grande do Sul, the Secretary of State for
Health (Sesa) has already confirmed a positive patient for the yellow fever virus,
but it is likely that the person contracted the virus in Guaraqueçaba,
Coast.

Even so, the municipality of Quatro Barras recalls that the
vaccination against yellow fever is available in the nine basic
health of the municipality, from Monday to Friday, from 7:30 a.m. to 5:00 p.m.

To date, there are already 15 confirmed cases and 77 occurrences of yellow fever in research throughout the state of Paraná. Another 236 suspects have already been dropped, according to a Sesa bulletin.

Last week, São José dos Pinhais, also in Greater Curitiba, came into a state of alert after detecting the death of 21 monkeys in the municipality. The monkey does not transmit the infection, but the death of these animals indicates the circulation of the mosquito vector of the disease.