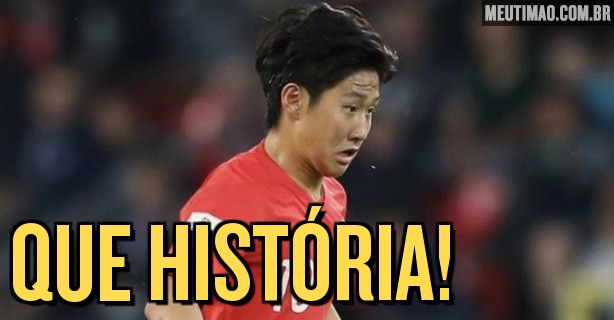 At 18, Kang-In is one of South Korea's highlights at the U-20 World Cup

Lee Kang-in is one of the sensations of the U-20 World Championship since last month in Poland. And there is an unusual relationship of the young Korean revelation with Corinthians.

Now 18-year-old and South Korea's 10-man shirt in a dream to take his team to the unprecedented spot in the World Cup final of the category (he's already in the semifinals), he called a Corinthians coach long before he shone like the youngest of the Korean team.

In 2011, while working in South Korea as coach of Goal Club Sports, Joseense Eduardo Vergueiro had the opportunity to train Kang for a few months. It was not long before the pre-adolescent to be scraped by scouts from Valencia, Spain, where he plays until today – he made his professional debut in the last edition of the 17-year Spanish Championship.

Vergueiro, who has worked in South Korea between 2011 and 2012, has been a Corinthians coach since 2017. He arrived in São Jorge Park initially to train in the U-11 category, but shortly thereafter he was promoted to assistant to the Under-13. Today he also works in Sub-16.

"(Working in South Korea) It was an excellent experience, it was my first step in coaching, my first opportunity. Kang-in already proved to be talented, far above the technical, creative and decisive level. in the most difficult games, "recalls Vergueiro, in conversation with My timon.

In addition to appealing to the Brazilian, the Korean boy also helped him to be elected the best coach in a tournament played in the Asian country – was champion three times with Kang-in.

"I remember that the last competition that he played before going to Valencia, he scored two goals, we won by 2 to 1, and I had the happiness of being elected the best coach of the competition," said the Corinthian coach, the under-13 champion of São Paulo in 2017.

Now far from South Korea, Spain and Poland itself, where Kang-in enchants those who accompany the World Cup, Vergueiro watches from afar "his boy" shine for the world. South Korea faces Ecuador in the semi-finals of a historic campaign on Tuesday afternoon – the country's best place at the Under-20 World Cup was just fourth place. The former commandant of today's Corinthian coach adds a goal and an assist even almost two years younger than most opponents and team mates.

Check out more of Eduardo Vergueiro's chat with My timon

They were looking for a technical assistant for the U-11 category. I received an invitation to apply and I accepted promptly. Then, with some changes, Célio Silva arrived and I started to work with him, already in the Under-13.

Working with a pair of old acquaintances of Faithful

It is an honor to work directly with Célio Silva and Zé Augusto, they are two very experienced guys, that I have excellent relationship and with much knowledge in the practice.
I have a lot of freedom to work with both of us and we are doing a good job in both U-13s and U-16s. I learn a lot from them daily.

Already played at the base of Corinthians

I was 13 years old when I arrived at the base of Corinthians. I played a final for São José EC against the club and, this day, I received the invitation to come and play here. I became part of the team from the beginning of 1998, and I stayed for about three years. I played with athletes like Bobo, Marcos Vinícius, Bruno Otávio and Diego Sacoman.

I was playing Paulista's Serie A-3 with São José EC when I started my undergraduate degree in physical education in 2005. I did not earn a good salary, so as not to compromise the study and overwhelm my father, I decided to get a job and able to pay the expenses. That's where I decided to interrupt my career and work in another area.

See more at:
Base of Corinthians.