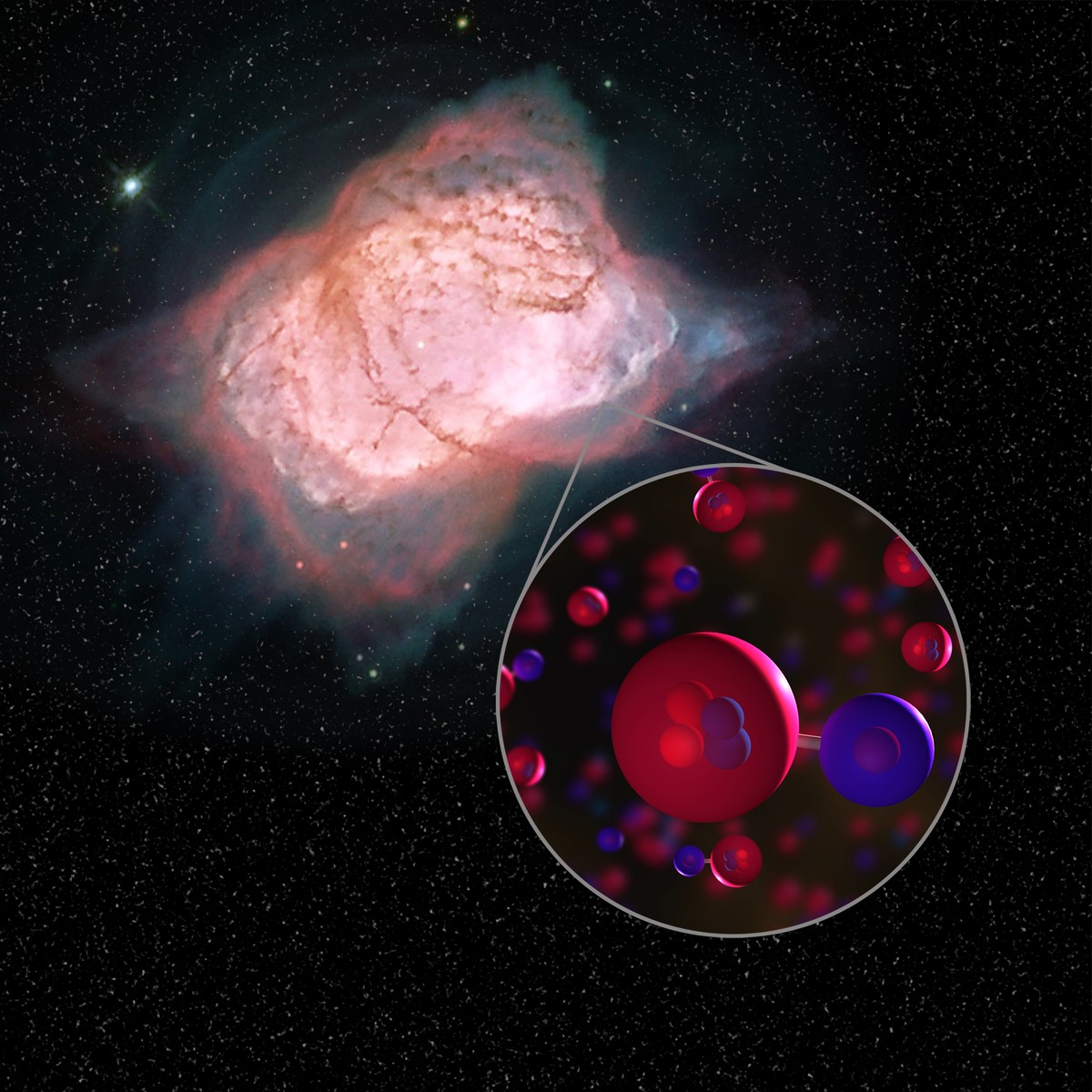 The first type of molecule that formed in the universe was detected in space for the first time after decades of searching, NASA said on Wednesday.

The molecule is an unlikely marriage of helium and hydrogen, known as hydro-helium ion, or HeH +. Scientists made the discovery in our own galaxy using the world's largest airborne observatory, the NASA Stratospheric Observatory for Infrared Astronomy, or SOFIA.

More than 13 billion years ago, the Universe was an undifferentiated soup of three simple, single-atom elements. The stars would only form 100 million years later.

Only 100,000 years after the Big Bang came the first molecule.

"It was the beginning of chemistry," said David Neufeld, a professor at Johns Hopkins University and a co-author of the study, which details how – after a decades-long search – scientists finally detected that molecule in space.

"The formation of HeH + was the first step on a path of increasing complexity in the Universe, a change as important as that of single cell life to multicellular life on Earth," he told AFP.

Theoretical models have long convinced astrophysicists that HeH + came first, followed – in a precise order – by a parade of other increasingly complex and heavy molecules.

HeH + was also studied in the laboratory in 1925, but HeH + in its natural habitat remained beyond the reach of scientists.

"The lack of definitive proof of its existence in interstellar space has been a dilemma for astronomy for a long time," said lead author Rolf Gusten, a scientist at the Max Planck Institute for Radio Astronomy in Bonn.

In the 1970s, the models suggested that HeH + should exist in significant quantities in the glowing gases ejected by the death of stars similar to the Sun, which created conditions similar to those found in the primordial Universe.

The problem was that the electromagnetic waves emitted by the molecule were in a range overridden by the Earth's atmosphere and therefore undetectable from the ground.

Thus, NASA and the German Aerospace Center joined forces to create an aerial observatory with three main components: a huge 2.7-meter telescope, an infrared spectrometer and a Boeing 747 large enough to carry them.

From a cruising altitude of almost 14,000 meters, the Stratospheric Infrared Astronomy Observatory, or SOFIA, avoided 85% of the atmospheric "noise" of terrestrial telescopes.

Data from a series of three flights in May 2016 contained the molecular evidence that scientists have long sought, intertwined in the planetary nebula NGC 7027, about 3,000 light-years away.

"The discovery of HeH + is a dramatic and beautiful demonstration of the tendency of nature to form molecules," said Neufeld.

In this case, it did so despite unfavorable circumstances.

Although temperatures in the young universe dropped rapidly after the Big Bang, they were still close to 4,000 degrees Celsius, a hostile environment for molecular binding.

In addition, helium – a "noble" gas – has a very low propensity to form molecules, "explained Neufeld.

Its union with ionized hydrogen was fragile, and did not persist for long, having been replaced by progressively more robust and complex molecular bonds.

Heavier elements such as carbon, oxygen, and nitrogen – and the many molecules they originated – were formed later by the nuclear reactions that take place in the stars.