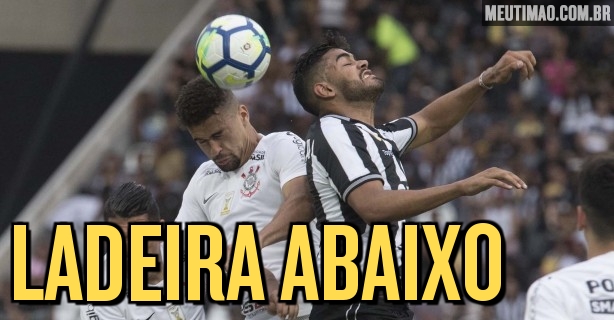 If you Corinthians supporter woke up this Sunday dreaming of an approaching G6 team of the Brazilian Championship, by now you should know that he was deceived. It was not enough to defeat Botafogo 1-0, Timão still saw a competitor win tonight, overtake him and bring him even closer to the relegation zone.

Read too:
Trio edge zero, and Cassio saves himself in Corinthians defeat for Botafogo
Jair Ventura and Vuaden are targets of the Faithful after Corinthians defeat; see repercussion
Roger rages against refereeing after defeat: 'Ridiculous what guys do'

Bahia, defeated by Corinthians in the final round, beat Chapecoense 1-0 in Salvador and jumped from 12th to 11th, switching places with Timão in the table.

Another alarming fact of this 32nd round is the distance from Corinthians to the sticking zone. With the win against Parana, Timão was five points behind Z4 (he was six).

To make matters worse, Corinthians can still be overcome. That's because Ceará and Sport face each other at the close of the round on Monday night. In case of victory of the Cearenses, the Timão falls to the 13th position; triumph of the Pernambucans further embeds the fight against relegation – check out the updated Brasileirão classification below.

Corinthians return to the field on Saturday afternoon, in a classic against São Paulo (fourth place), in the Arena, in Itaquera, for the 33rd round of the Brazilian Championship.

Check the current ranking of the Brazilian Championship

See also all the rounds and more information of the classification of the Brazilian Championship in the special page with the table of the competition.

See the matches of the 33rd round of Brazilian 2018