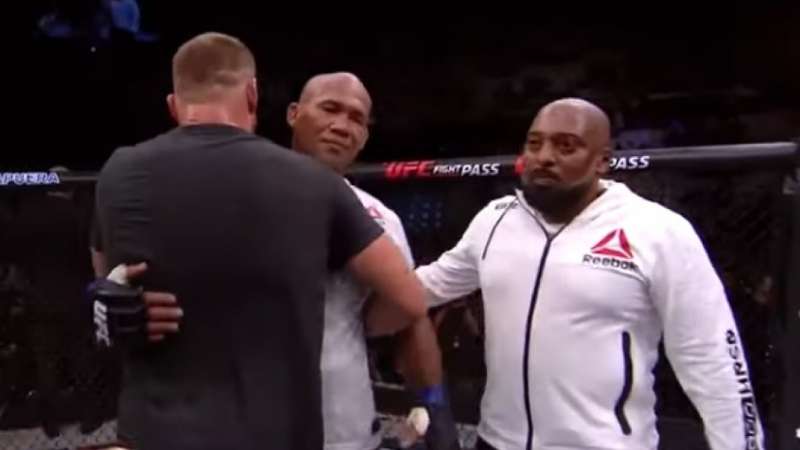 Previously with great anticipation, the UFC São Paulo main card, held on Saturday (16), ended with bitter taste for the home athletes in the two main fights. In the main event, making his light heavyweight debut, Ronaldo Jacaré was defeated by Jan Blachowicz in the split decision, while in the co-main event, Shogun well tried, but in a warm duel against Paul Craig, ended up in the draw for the public frustration at the Ibirapuera Gymnasium.

The big party was reserved for Charles do Bronx. Fighting in his hometown, the Paulista gave a show and defeated Paul Craig by knockout in the first round, adding his sixth consecutive victory. At the opening of the main card, Wellington Turman and André Sergipano emerged winners against Markus Maluko and Antonio Arroyo, respectively, both by unanimous decision.

Wasting no time, Ronaldo Jacaré struck the first blow and already sought the grappling fight, leaving Jan Blachowicz pressed against the grid. Unable to get the fight to the ground, the Brazilian returned to the exchange, but soon resumed his initial strategy, however, without effectiveness. The duel continued in the second round and some boos began to emerge from the crowd, although Jacaré had a slight advantage at the moment. The plot followed the same in the third round, with little action and the Jiu-Jitsu black belt seeking the center of the cage to press the Polish, who in response tried to apply low kicks.

In the fourth round, the Brazilian continued with the failed strategy of "taking care" of the center of the cage and pressing Blachowicz against the grid, which with his injured foot, scared only in some counterattacks. The momentum did not change in the last round, and by split decision of the jury, as a result that could have gone either way, Blachowicz was declared the winner, reaching six wins in the last seven fights.

After pressure from Paul Craig in the first few seconds, Mauricio Shogun managed to reverse the situation and led his opponent to the grid. The Scotsman, however, did not remain at a disadvantage for a long time and tried to reverse side, connecting strikes and giving advantage. In the second round, Shogun came back better and after striking good punches, managed to get Craig to the ground, where, despite not showing much ground and pound injury, kept the dominance over.

The match saw a sharp drop in pace from both fighters in the third and final round, but showing good strategy, Shogun brought Paul Craig back to the ground, where he managed to use his weight well and kept the Scotsman in an unfavorable position. In the last few seconds, however, Craig managed to get up and hit the Brazilian hard, which was saved by the bell. In the end, the referees decided to draw, frustrating the crowd in the gym that hoped for a good result of the legend of Curitiba.

With great support from the crowd, Charles do Bronx charged Jared Gordon and quickly pinned his opponent to the ground, but could not maintain his position. The Brazilian then set out to define the fight in exchange, and with brutal blows that caught the American in the chin, won by knockout in the first round. It was Charles's sixth consecutive lightweight win, placing himself at the top of the class. In an interview after the fight, the Paulista challenged former champion Conor McGregor.

Antonio Arroyo started the duel at high pace and, after a good sequence of blows, took André Sergipano to the ground. Agile, Sergipano fell with the armlock in place, but the paraense escaped well. The positions were reversed and André was over, but after an illegal blow, the duel was interrupted. In the second round, Sergipano tried another submission in the dungeon but saw his rival resist once again.

In the last partial, André Sergipano continued dominating on the ground, and with good transitions, kept Antonio under pressure. Arroyo even managed to get up, but with Sergipano defending himself well, little struck. After a third warm round, the referees unanimously decreed André's triumph.

Wellington Turman started the duel seeking the grappling fight and then placed Markus Maluko against the grid, trying to bring the fight to the ground. The Paulista got rid of the initial pressure and, with a spinning blow, shook the opponent. The two fighters showed no more effective action, but struck at all times in a balanced fight. In the second round, Turman took the initiative again and, after good blows, finally put Markus on the ground. The clash, however, soon got to its feet, with Wellington once again managing to apply good combinations and noting important points.

In the third round both were already showing wear and tear, but Wellington Turman was still superior in the standing fight and strategically knocked Markus down, controlling the duel until the end of the end, even with the opponent looking for a "last breath" in the final seconds. In the end, a unanimous decision victory for the curitibano, who won his first in two fights at Ultimate.