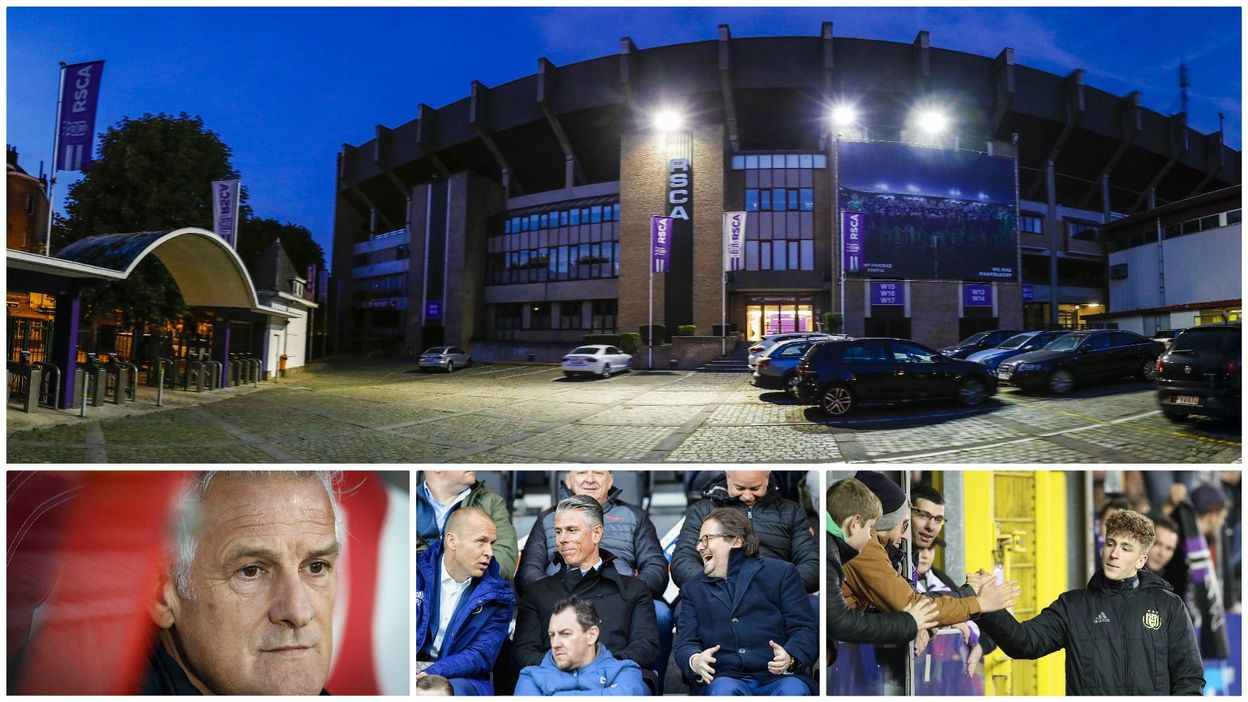 The Anderlecht wreck on Saturday at Genk (3-0) found an extension off the field with Hein Vanhaezebrouck's media counterattack over the payment of their compensation.

The club believes that everything was paid by legal standards, the former RSCA trainer claims, meanwhile a large sum of group insurance remains pending and Anderlecht has manipulated the Licensing Commission, making him believe otherwise …

In short, even more than on the night of December 16 (dismissal of Hein Vanhaezebrouck following a defeat in Cercle Brugge), the Anderlecht boat sails in a storm.

Is Fred Rutten just passing by?

Since his appointment, the case of the challenges of the Dutch coach. 5th choice of management (behind De Boer, Cocu, Jol and Hjulmand), he just initialed a … CDI. Although this contractual formula is common in the corporate world, it is much smaller in the world of football, where everything supposedly has a beginning and an end (even if it is primarily used to calculate the "resale value" of a player or a coach). The club made that choice a commitment with long-term commitment. The outside world saw, instead, a way to get rid of an easy and cheap man that the rumor sent back to Twente after 6 months of contract …

The initial impression, reinforced by sweet eyes made in January for the Danish coach Kasper Hjulmand (Rutten was free, not Hjulmand), is now backed by a form of secret agenda: newly released from his obligations to Nordsjaelland, Hjulmand would take advantage of his free time to analyze the strengths and weaknesses of his future nucleus.

Under these conditions, it was difficult for Fred Rutten to feel supported both internally and externally, especially at the start of the Play-Offs, the sport's direction reminded him of the need to finish on the podium. ..

But beyond the length of your stay, it's Rutten's own style that disarms.

If your tactic has the merit of being clear, invariable and easily assimilated by your group, we may be surprised by the choice of players … When it is available, Bakkali (almost the only one Rutten knew when he arrived) is considered to be an undisputed starter while he is far from being the best. On the other hand, Saelemaekers has absolutely no voice when it was one of the best anderlechtois of the beginning of the season. We can continue: Obradovic suddenly grace returned while Cobbaut, income of wound, disappeared without reason of the traffic. Sanneh banned from the team (not a minute of play under Rutten) while Lawrence convinces no one … And more broadly, the youngsters (Salemaekers, Amuzu, Bornauw, Kayembe, …) truce. In the greyness of this rejected youth, only the small Yari Verschaeren stands out, with a contract recently extended until 2022.

Finally, in addition to his choices, Fred Rutten's posture does not fail to challenge. In correspondence, he seems strangely passive and observant, as resigned. And at a press conference, his statements startled: "We saw the difference between a candidate for the title (Genk) and a non-title candidate (Anderlecht)"or again:"Bruges is clearly the best team in the countryStrategists can see a tactic to get rid of the pressure, the more pragmatic will find more sincerity (naivety?) In the verb. And if Rutten really believes what he says, how to succeed, then to convey a positive and motivating message to his troops?

2. Who are the deputies?

The Anderlecht bank is currently overflowing.

Alongside Fred Rutten, we found Karim Belhocine (rare survivor of previous staff) and Arnaud Van Zalm (Rutten's loyal lieutenant). Jonas De Roeckhe took height. It now installs a press platform, equipped with a headset that allows you to communicate in real time with the bank and see what others do not see …

As for Pär Zetterberghis role is ambiguous from the beginning. He landed in big shoves with a double capital "ADN of the club" and "friendliness of the fans", did not receive an official title. Worse, for some time, he changed the "bench workout" combo against that of "grandstand suit." We can not fail to see the consequences of this small altercation, through the media, with trainer Fred Rutten. Change after the public councils that Zetterberg allowed to give Verschaeren … But if not to reflect his experience and to guide the young, what Zetterberg's experience can serve well inside a club trying to rebuild?

3. What is the added value of the winter market?

If the contribution of Bolasie There is a unanimous agreement (the Congolese are probably the most successful winter transfer of the last few years), the issue concerns their future in the medium term. Anderlecht will be able to maintain a player with the salary standards of the "Premier League"? Nothing is less certain …

KaraHe brought from Nantes his indispensable leadership and his physical impact. But the question of its speed of movement and, sometimes, of its positioning, arises.

As for Zulj, remains a mysterious case … The man who "sees things that others do not see" (the dressing room dubbed him … Nostradamus or David Copperfield!) and that Vanaken "does not impress", we always hope that he proves its added value. If the man has a certain technique and a good leg, his slowness puts him out of position …

A mixed record, therefore. But Anderlecht is more globally strengthened by the window of winter transfers than its main competitors. Fred Rutten has more options than Vanhaezebrouck, so the competition should improve the group. But this does not seem to be the case …

4. How does the organization chart fit?

More than ever before, Anderlecht's structure is pyramidal.

The president Marc Coucke, has the "final cut" in all decisions and … interferes in all decisions, including to overflow from its theoretical zone of action. In his interview with Het Laatste Nieuws, Vanhaezebrouck said he was shocked to see Coucke "land in the locker room at Anderlecht-Ghent to order players closer to their man"or, while traveling in Europe, to hear him slip into the ear of Musona and Bakkali"that they would soon receive more playing time".

It is also Marc Coucke, who insisted on paying 8 million euros to Sanneh (story of "striking a big blow in the eyes of the fans"), against the advice of a Luc Devroe… fired a few weeks later.

Below Coucke, Michael Verschueren is the only one to perpetuate the "Anderlecht tradition" and to incorporate a kind of affiliation (literally and figuratively) with the past. But the general manager discovers the function and, despite the obvious qualities of a manager, still needs to make his mark.

33 years after playing as a player, Frank Arnesen returned to the club as technical director. Essentially for your address book and your international networks. Difficult to judge in a single transfer window, especially since his best transfer may be a man of the shadows (Bjarne Hansen, former Scout Manchester and PSV, discoverer of talents like Eriksen or Rommedahl). But there are rumors that relations between Arnesen and Coucke are no longer good …

This season, Anderlecht fans seem disappointed, almost resigned. His club record is disastrous (eliminations without glory in the Belgian Cup and in the Europa League), Play-Offs addicted with a place (4th) and total of points (26) historically low.

Fans are also confused by the brutal changes in their venerable institution. Marc Coucke has changed everything and especially very quickly. Sometimes, despite the supposed priorities (eg VIP spaces and booths, as well as restaurant areas, have been redeveloped in the summer!).

The fate of the Vanden Stock family is also poorly experienced by the most loyal fringe of a mauve audience who no longer recognizes in their club new look. In bulk: the broken promises of naming Roger Vanden Stock Honorary President, his removal during European travel and even … on the rostrum of honor, where, from now on, Kiki Vanden Stock (Roger's wife must pay the his place. "A succession of events, suspected, barely experienced by Roger Vanden Stock, who did not respond by the verb, but by sitting next to … Lucien D'Onofrio during the recent Antwerp Anderlecht!

In addition to these symbolic (or non-measured) measures, the recent capital increase, which the Vanden Stock Girls did not participate in, marginalized the family's impact within the club.

Finally, the appointment of the stadium (which is about to value the name of the lotus) will soon remove the name of Constant Vanden Stock from the pediment of the Tribune 1. The collapse of a symbol, an inheritance and a tradition that purple fans digest with difficulty …